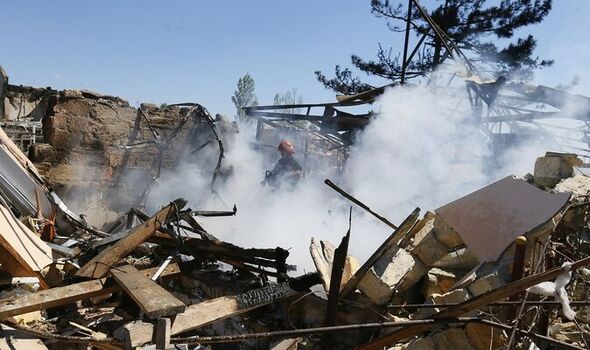 In a tub-thumping speech in St Petersburg to celebrate his nation’s Navy Day, the Kremlin leader announced that the hypersonic Zircon cruise missiles would arrive “within weeks”. Putin said: “The delivery of these [missiles] to the Russian armed forces will start.” Their deployment would depend on “Russian interests”. He added: “The key thing here is the capability of the Russian navy… It is able to respond with lightning speed to all who decide to infringe on our sovereignty and freedom.”

Putin said the US remained Russia’s most serious security threat and the West will be alarmed by talk of weapons that can travel at around 7,000mph.Although the missiles can be fitted with nuclear warheads, the cost of doing this is thought to be beyond Russia currently.

The missiles will initially be deployed from frigates and later from submarines.

The warning came as Volodymyr Zelensky yesterday ordered all the estimated 220,000 civilians still living in unoccupied parts of eastern Ukraine to evacuate immediately.

“Many refuse to leave but it still needs to be done,” he added. “There’s already a governmental decision about obligatory evacuation from Donetsk region.”

The east of the country has seen increasingly heavy clashes in recent days amid a slow advance by Russian forces, who control large parts of it.

“We will use all available opportu- nities to save as many lives as possible and to limit Russian terror as much as possible,” Mr Zelensky said.

Kyiv’s deputy prime minister, Iryna Vereshchuk, also warned that the evacuation of people from east- ern Donetsk needed to take place before winter begins because the region’s natural gas supplies have all now been destroyed.

Ukraine yesterday claimed it had killed 170 Russian troops in the past 24 hours and had destroyed two arms dumps in the Kherson area.

Renewed Russian strikes yesterday left one person dead in the south of the country and also hit a school in Kharkiv, officials said. The mayor of the southern city of Mykolaiv said it had suffered “massive” Russian bombardment overnight killing one of Ukraine’s richest men, Oleksiy Vadatursky, and his wife Raisa.

Grain tycoon Mr Vadatursky, 74, was said to be worth £369million. Mykhailo Podolyak, an adviser to Mr Zelensky’s office, said one of the missiles hit the businessman’s bedroom, adding that this “leaves no doubt” it was being guided.