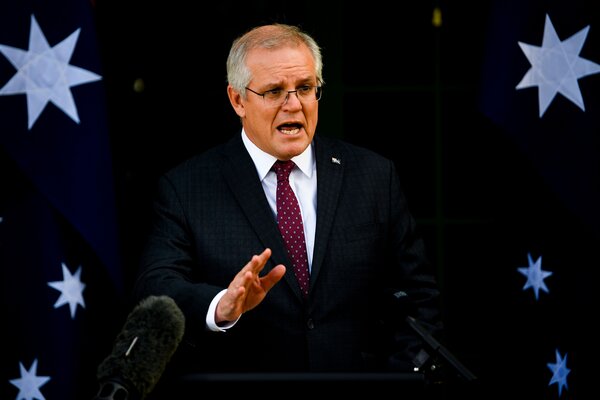 Prime Minister Scott Morrison of Australia apologized on Thursday for delays in the country’s vaccine program, amid mounting pressure to take responsibility with half the population in lockdown because of outbreaks driven by the Delta variant.

“I’m certainly sorry we haven’t been able to achieve the marks we had hoped for at the beginning of the year, of course I am,” Mr. Morrison said at a news conference. “But what’s more important is we’re totally focused on ensuring we’ve been turning this around.”

At the beginning of the year, Mr. Morrison had said that he aimed to vaccinate everyone who wanted the shots by the end of October. The target has since been pushed back to the end of the year.

One month ago, only 5 percent of Australians over age 16 were fully vaccinated, one of the lowest rates among rich countries. Mr. Morrison said the program had picked up pace and that rate was now 15 percent, with 36 percent having received at least one dose, according to government statistics.

Mr. Morrison’s comments as New South Wales, Australia’s most populous state, reported 124 new community cases — its highest daily total so far — in its fourth week of lockdown. The state’s premier, Gladys Berejiklian, warned that she was “expecting case numbers to go up even higher” because many people had been infectious while in the community.

The state of Victoria, also in lockdown, recorded 26 daily cases, its highest this year.

On Wednesday, Mr. Morrison had refused to apologize for the vaccine rollout during a radio interview on the commercial station KIIS. The host, Jason Hawkins, asked him to apologize repeatedly, at one point saying: “Scott, I’d even take a ‘My bad, Jase.’”

The prime minister replied: “We’re fixing the problem and getting on with it.”