Daria Isakova and her husband live in one of the housing blocks hit by Russia’s airstrikes last morning. She told Express.co.uk: “We woke up from the first bomb. Then was the second one. All the windows were shaking.”

The couple, like most of those who stayed in or have returned to Ukraine, are “used to this”, she said, referring to the noise of air raid sirens and the shock that follows each attack.

But damage to the walls that shield them from their country’s war-torn streets isn’t new for the two, either.

In the early days of the conflict, they lost the place they had bought in Hostomel, northwest of Kyiv, just months before the start of Moscow’s invasion on February 24.

Russian troops took it, lived there and eventually burned it down, she explained.

Sharing a photo of how she found the house, Ms Isakova said: “This is me on my terrace remembering how I planned to put a work table here.”

Although their current home isn’t destroyed, she said she thinks they might move.

READ MORE: Russia in chaos as economy could completely collapse 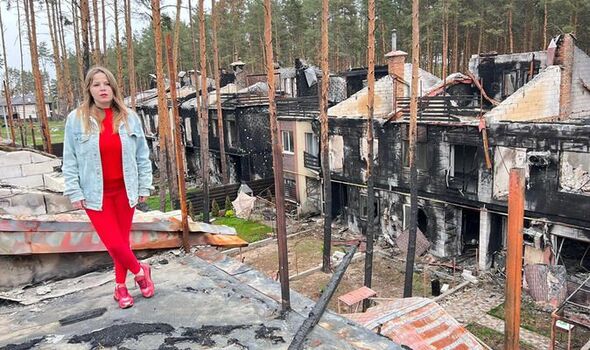 The 32-year-old said: “The smoke from burning is around the house.

“I hope they don’t want to bomb the same house again tonight.

“But I think I will leave for another place. Because it’s the second time for this building.”

In the tone of someone who has been forced to build an extra layer of resilience, she added: “Sometimes I want to cry. But you know, we are alive. So no, we cannot make regrets. It won’t change anything.”

The first time her building was hit defiantly coincided with the visit of UN Secretary-General Antonio Guterres to Kyiv on April 28.

Ms Isakova said: “The day the United Nations chief was in Kyiv, this building was bombed. Today, the same house was bombed.”

Ukraine LIVE: Follow the latest updates on the war here 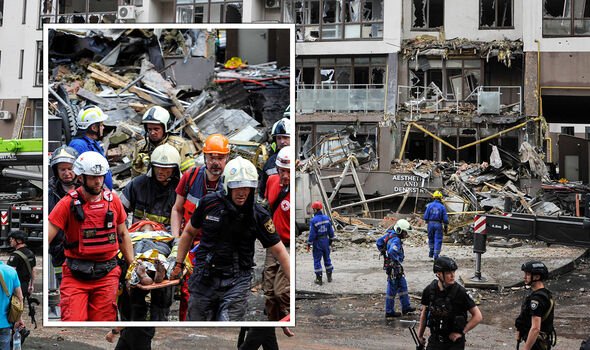 Kyiv Mayor Vitali Klitschko, who also alluded to the April 28 missile, said he thought the airstrikes were “maybe a symbolic attack” ahead of a NATO summit in Madrid starting on Tuesday.

Sunday’s horror killed at least one person and wounded six others, including a seven-year-old girl.

Firefighters put out a fire in a badly damaged nine-storey residential building in the central Shevchenkivskiy district, while Andriy Yermak, head of the president’s administration, said on Twitter a missile had also damaged a kindergarten.

The strikes extended far beyond the capital, with other areas impacted too. These include the central city of Cherkasy, where one person died, and the north-eastern Kharkiv region.

As Russian forces launched the strike at 6.22am, the G7 group of the world’s richest nations prepared to begin a three-day summit in Schloss Elmau, in the Bavarian Alps, Germany. 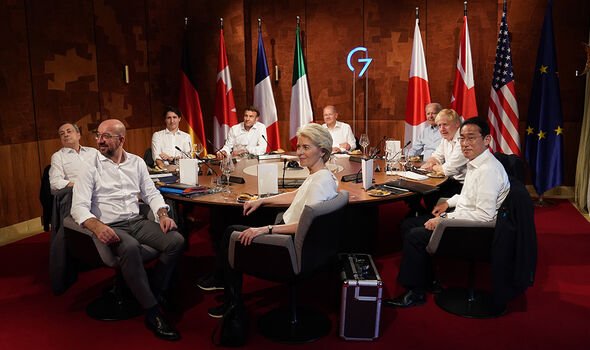 The leaders of Britain, Canada, France, Germany, Italy, Japan, the United States and also the European Union have a full agenda to tackle today and tomorrow – with the Ukraine crisis at the forefront of talks.

German Chancellor Olaf Scholz, hosting the summit, condemned Russia’s “brutal” missile attack on Kyiv, saying it reinforced the need for G7 economies to “stand together and support the Ukrainians in defending their country”.

He admitted that “all G7 countries are concerned about the crises we are currently facing”.

But in a more hopeful tone, he added: “I am very, very, very confident that we will succeed in sending a very clear signal of unity and decisive action from this summit.”

Meanwhile, Prime Minister Boris Johnson met French President Emmanuel Macron and, according to a spokesperson for Mr Johnson, the two “agreed this is a critical moment for the course of the conflict, and there is an opportunity to turn the tide in the war”.

The Prime Minister “stressed any attempt to settle the conflict now will only cause enduring instability” by giving “licence” to President Vladimir Putin.

Separately, accounts of destruction and suffering continue to emerge from across Ukraine.

On Monday morning, the mayor’s adviser Petro Andryushchenk said 100 bodies had been found under the debris of a residential destroyed building in Mariupol, the port city that fell to Moscow last month after weeks of relentless shelling.

In a post on Telegram, the official said Russian forces had no plans to retrieve and bury the bodies after the housing block was hit by an airstrike.

Meanwhile, Kremlin-backed separatists said they were pushing into Lysychansk, the last major city still held by Ukrainian defenders in the eastern Luhansk province, Donbas, after the strategically key Sievierodonetsk fell on Saturday.