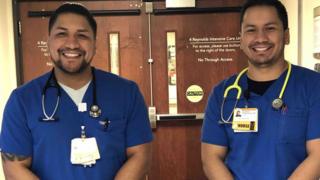 The US Supreme Court is considering a case that could put hundreds and thousands of people who were brought into the country illegally as children at risk of deportation. Some of those are healthcare workers dealing with the coronavirus pandemic.

At the beginning of April a long line of police cars snaked slowly around a hospital in Winston-Salem, North Carolina with their blue lights flashing in the bright sun. It was a tribute, they said, to the healthcare workers risking their lives to treat patients with Covid-19.

But for Jonathan Vargas Andres, an ICU nurse treating Covid patients in that hospital, these grand gestures feel somewhat empty.

He’s worked in intensive care for four years in the same unit as his wife and brother – who are nurses too – and the past week has seen a spike in cases on the ward.

Jonathan is also undocumented and in the next few weeks he’ll find out whether the country that he’s risking his life to protect will decide to deport him.

“I try not to think about it because if I think about it for too long I get tired,” Jonathan says. “I’ve basically had to zone it out for my own health.”

He speaks deliberately in a soft, southern drawl. “It’s fear more than anything.”

Jonathan is a recipient of Daca – or the Deferred Action on Childhood Arrivals. It’s an Obama-era ruling from 2012 that shielded young people who were brought to the US illegally as children from deportation.

It provided them with work and study permits. Jonathan came from Mexico when he was 12.

In 2017, President Trump decided to end the Daca programme.

The Supreme Court is now considering a series of cases that challenge Trump’s decision and is expected to release its rulings before the end of June on whether stopping the programme was unlawful.

While these cases are pending, Daca recipients are still able to live, work and study in the US.

Any day now Jonathan could be told he no longer has to right to work or live in the United States.

Who are the “Dreamers”?

There are approximately 700,000 Daca recipients in the US.

The Centre for American Progress, a left-wing think tank, estimates that 29,000 of them are frontline healthcare workers – doctors, nurses, paramedics – and a further 12,900 work in other aspects of the healthcare industry.

Jonathan describes his job as a calling. He loves being a nurse despite facing a pandemic just four years into his career.

“It’s obviously scary when you’re in there,” he says. “You get very, very, very paranoid about what you touch.”

“But you kind of have to put that in the back of your mind because you’re in there to try to help these people. It’s not about you.”

His hospital has just enough personal protective equipment (PPE). They’re using it sparingly, which does make him nervous.

But what’s even harder, he says, is having to watch people die alone.

“It’s very sad, very depressing to see families having to say their last goodbyes through an iPad,” he says. “It’s not just stressful but emotionally draining.”

At least on the ward there is solidarity though he sometimes feels like he’s living a double life.

“When I go to work and I talk to my co-workers, they don’t know about my status,” he says. “But then I go back home and realise that, you know, I’m living under the radar.”

“You don’t even know if anything that you’re doing to help your country is going to be appreciated. And in a couple months, you might be deported.”

Jonathan was born in Mexico, in a small town near Puebla in 1990. His father drove a bus for a living but the family struggled to get by. He remembers the house they lived in, it had no windows, a dirt floor, no running water.

His father left for the US first in 2000 and sent for his family two years later. Together with his brother and his mother, he crossed the river separating Mexico and the US and walked across the desert, entering the US without permission.

Until 2012, the whole family lived under the radar. As undocumented children they could attend public school but not public university, and private colleges were far too expensive.

When he finished high school he worked odd jobs. He was fixing tyres in a tyre shop when the Daca programme was announced.

“It was life changing,” he says. “I don’t know how else to describe it. Knowing that I was going to be able to have a chance to work legally and have the possibility to go to school [university].”

He had been in the US for ten years by that point and, though he says he felt American, he didn’t have the paperwork to prove it. When Daca happened he and his brother immediately tried to sign up for the military but they were rejected because of their citizenship status.

They took their desire to serve and went into nursing instead.

‘Go back across the river’

Though he loves the work, the past four years have been an anxious time.

Jonathan has started clenching his jaw in his sleep. Sometimes he does it so much that the joint swells and it hurts to eat or talk. It’s a condition usually linked to stress.

“I’ve been dealing with this stress since 2015 when Donald Trump announced that he was running for president and the first thing he did was attack Mexicans.”

“It became a very, very real when he took office.”

Since then he says he’s felt more animosity directed towards him and has experienced overt racism. He believes some people now feel an entitlement to display bigotry.

He describes an incident outside his gym before the lockdown, in which a man shouted racist expletives and told him to “go back across the river” because he parked incorrectly.

‘Scrubs are my camouflage’

Jonathan got married two years ago and his wife is an American citizen. He’s applying for a green card but it’s not a given. His illegal entry as a child could count against him.

If an undocumented child doesn’t leave the US within a year of turning 18 they take legal responsibility for their entry.

And if the Supreme Court decision halts the Daca programme he could lose his right to work.

Jonathan is trying not to think about what will happen if the decision goes against him. He says he won’t go to Mexico – he doesn’t believe the nursing profession is valued there – but he and his brother have been researching moving to Canada.

He would have to leave his parents and his life of the past 18 years behind. He’s currently studying part-time for a further qualification in nursing, he may have to quit that too.

Though the fear of Covid-19 and the Supreme Court decision hang over him every day, he feels a sense of security in his dark blue hospital clothes.

“Sometimes I feel as if my scrubs or uniform that I wear for work is some type of camouflage,” he says. “People see me wearing scrubs and they assume I’m one of the ‘good ones’ or that I am here legally.”

“But as soon as I change into regular [clothes] there’s no way for them to know I’m a nurse so I happen to become a wetback like they assume about everyone else who looks Hispanic.”