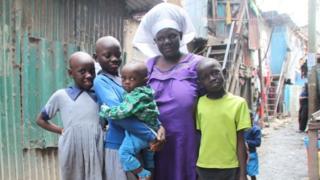 As Europe and much of the developed world shuts down in the face of coronavirus, many millions of people haven’t much hope in following the World Health Organization (WHO) advice on washing hands and keeping their distance.

About one billion people live in slum-like conditions, making up 30% of the world’s urban population. These housing facilities tend to have very little ventilation, drainage and sewage facilities, with diseases spreading easily.

Celestine Adhiambo, 43, lives in the Mukuru slum in Nairobi with her husband and six children. The family’s one-room house has no running water or electricity. She says her children can’t move around much without banging into each other.

“It is not possible for us to separate a child from another in case of any infection. We don’t have any space. No rooms here. The government should take the infected people to hospitals,” she told the BBC.

Her husband works as a carpenter and on the days he works, he earns about 400 Kenyan Shillings (£3.15, $4) and every day the family spends about 50 shillings on buying 10 buckets of water.

But the water supply is erratic and on days when there is no water, the family has to forgo the quick bath they are accustomed to.

Over half-a-million people live in Mukuru. The houses are made from cardboard or plastic material while those who are better off have houses made from corrugated iron sheets. There is no waste collection, with most of it going directly into the river.

Local NGO Mercy Mukuru runs four primary schools in the area with a total of around 7,000 students. About half of the students cannot afford soap, according to its head, Mary Killeen.

“I am worried. If the virus spreads in our locality it will be terrible,” Ms Adhiambo said.

Dr Pierre Mpele, a former WHO representative who has worked in many countries in central and West Africa says African households can be more crowded and in some cases, up to 12 people will share a small house. “Self-quarantine is not possible in many places,” he says.

It’s not just slums that are struggling with the availability of water. The cities of Johannesburg and Chennai both almost ran out of water last year.

Shanthi Sasindranath, a mother of two who lives in the outskirts of Chennai told the BBC: “If there is a shortage like last year, it will be difficult to get clean water to wash our hands multiple times.”

During the water shortages last year, her family was able to survive by buying untreated water from agricultural wells located more than 50km away.

“In the local trains, people cough inches away from your face, without even covering their mouth. If I point this out, some will say sorry, few others will just pick a fight.”

Friends and relatives visit her apartment every day and Ms Sasindranath is yet to figure out how to minimise human interactions.

“I’m telling my children to wash their hands slowly and thoroughly. I told them they must wash their hands whenever they come back from outside, even if they’ve just popped out for five minutes. As a family we are not travelling as much as we used to.”

Dr Poppy Lamberton, a lecturer in delivering health services at the University of Glasgow in the UK, said governments need to step up in a big way.

“Some governments are poor, but not as poor as individuals. In the case of an outbreak, they should be able to isolate a whole community.”

The WHO says it is working to support governments manage their response to the pandemic, but Dr Mpele wants it to come up with a guide which will work in the developing world.

He is also calling for greater efforts to engage with community leaders before a full-blown crisis occurs in Africa.

The WHO says local transmission – people with no travel history – remains low in the African continent and containment is the most appropriate strategy.

Back in Mukuru, nothing seems to have changed in recent weeks.

Ms Adhiambo says she feels defenceless and is doing the only thing she can do.

“I am praying to god to save us and our neighbourhood from this virus,” she said.