Scotland’s first minister is centre-stage in the independence debate. 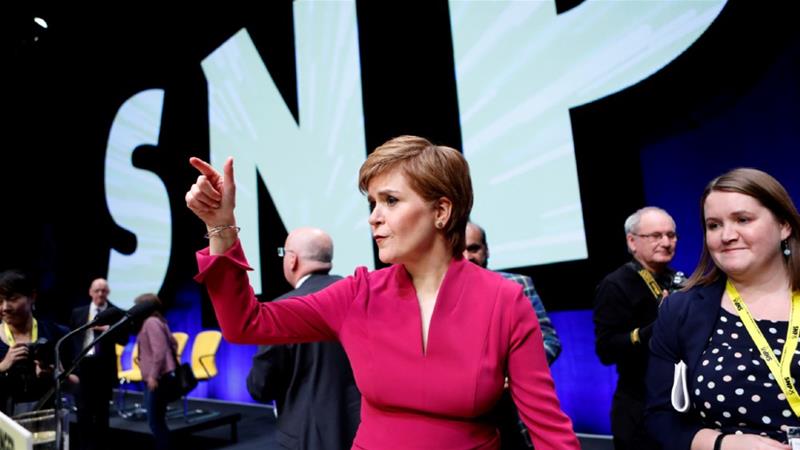 Glasgow, United Kingdom – Scotland’s multi-election winning first minister may be getting on with her day job, but she will surely have one eye on disquieting events happening within walking distance of her Scottish Parliament office in Edinburgh.

Nicola Sturgeon’s predecessor as leader of the pro-independence Scottish National Party (SNP) and Scotland’s former head of government, Alex Salmond, 65, has been standing trial since Monday for a string of sexual and indecent assault allegations, all of which he denies.

Sturgeon’s one-time friend and mentor took Scotland to the brink of Scottish independence in 2014, but how the expected four-week court case might impact the current SNP chief is unknown as the underlying politics of the trial threatens to polarise the party itself.

But such is her standing in Scotland, the United Kingdom and across Europe that all eyes are trained on 49-year-old Sturgeon, as well as the man in the dock.

“Anyone who’s seen Nicola Sturgeon perform – whether it be on the Scottish, British or international stage – knows that she is one of the UK’s most formidable politicians, able easily to wipe the floor with many of the leaders of other parties she’s up against,” Tim Bale, a professor of politics at Queen Mary University of London, told Al Jazeera.

Sturgeon joined the SNP, then just a fringe party, as a 16-year-old – and soon embarked on a law degree at the University of Glasgow. She failed in her electoral attempts to enter the UK Parliament, but when the devolved Scottish Parliament opened in 1999 she was elected as part of the body’s first batch of newly crowned MSPs.

In 2007, the SNP – under Salmond’s leadership – broke the stranglehold of the Scottish Labour Party to become the Scottish Parliament’s party of government. While Salmond assumed the role of Scotland’s maiden SNP first minister, Sturgeon became his deputy.

“In the context of the United Kingdom, there is some understandable envy that she is clearly the most competent head of government of any of the UK nations,” Natalie Bennett, the former leader of the Green Party of England and Wales, told Al Jazeera.

Yet not everyone would agree, with critics highlighting her mixed domestic record on health and education. And despite pushing for a second independence vote – after Scotland opted to remain in the EU in the 2016 Brexit referendum while Britain as a whole voted to leave – she has been repeatedly rebuffed by UK Prime Minister Boris Johnson, a Conservative and Unionist who has refused to sanction a legally binding poll, highlighting the limits of her power.

The Scottish Parliament will also be holding an inquiry into how Sturgeon’s Scottish government handled complaints against Salmond. The ex-first minister successfully sued his former administration in Edinburgh last year, following its flawed inquiry into sexual harassment claims against him, and he was awarded costs of more than £500,000 ($623,000). How this, too, might play out for Sturgeon, who is the first woman to hold the title of Scottish first minister, is again unknown.

But that has not stopped many from discussing an SNP future without Sturgeon at the helm. For her part, Sturgeon has said she has no intention of going anywhere, and is looking ahead to fighting the next Scottish Parliament election in 2021.

Yet Scottish independence advocates are watching the trial, where one of the complainants is an SNP politician, with great interest.

“I know there’s been a lot of talk about how things might go during the Salmond trial, and how it might impact on her, which is why some people have been positioning themselves to possibly step into her shoes,” says author and independence supporter Lesley McDowell. “But I’d be very, very sorry to see her go.”