Number of white nationalist groups in US increased in 2019, while overall number of hate groups declines, SPLC finds. 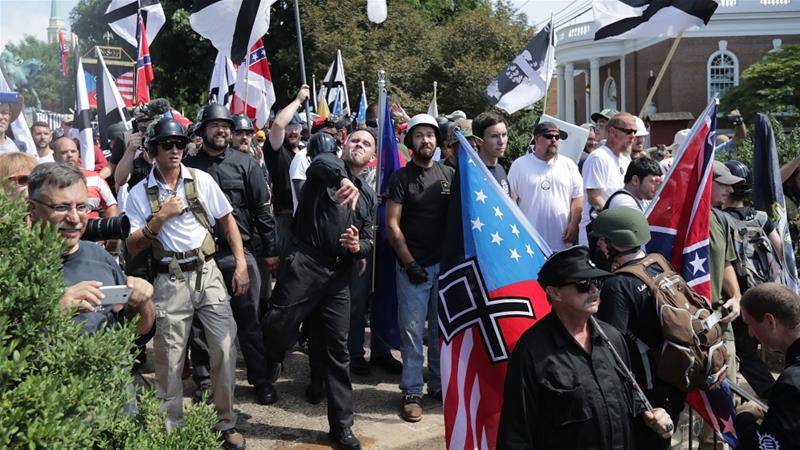 A new report on hate groups in the United States detailed an increase in the number of white nationalist groups even as the overall number of hate groups declined slightly in 2019.

Lecia Brooks, SPLC spokesperson, said in a press call on Wednesday that the drop was a “marginal decline” as “surging white nationalist movements” continued as a “rising threat to our democracy”.

The SPLC is a nonprofit organisation that advocates for civil rights, particularly of minority groups. The organisation defines a hate group as any whose “statements or principles … or practices” endeavour to “attack or malign an entire group of people”.

Brooks noted that the administration of US President Donald Trump has encouraged far-right hate groups since his 2016 campaign for president “energised whited nationalists”.

While the overall numbers dropped in 2019, there “are other indicators that show hate is still a great problem in this country”, Brooks said.

Brooks said that many are organising online “instead of joining formal hate groups … they’re using the internet to network, fundraise and recruit.”

The shooting at mosques in New Zealand that killed at least 50 Muslim worshippers and was streamed on social media in March 2019 was a key example of the spread of online hate.

Ahussain said the way in which “groups have been able to organise actual real-world demonstrations” via social media, sometimes with weapons at places of worship, was of particular concern.

White nationalist groups were not the only grouping to see an increase. The report detailed an 18 percent increase in anti-immigrant groups. 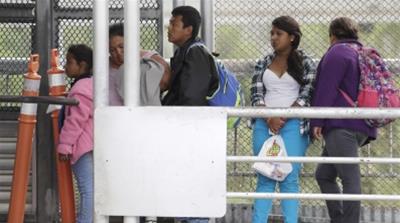 Still, the Trump administration has encouraged these groups through its “white nationalist” immigration policies, according to Erika Pinheiro, litigation and policy director of Al Otro Lado, a social justice legal assistance group that serves deportees and others.

The “government itself has used hate language” when referring to non-white immigrants and “has made sweeping changes to the law to restrict non-white immigration to the US”, Pinheiro said during the call.

These include measures to block low-income migration, policies that keep asylum seekers in Mexico, among others that contravene US law and does not provide humane conditions for migrants, Pinheiro claimed.

With the government continuing to keep detained migrants in camps along the US border – a policy that has drawn widespread criticism and legal challenges – as the coronavirus spreads “we can expect that many immigrants will die”, Pinheiro said.

With the spread of the coronavirus, many have noted an increase in attacks against Asians.

Eric Ward, executive director of the Western States Center, a rights groups based in the US Pacific Northwest noted an increase in white nationalist rhetoric in regard to the coronavirus “linking [Asians] to the coronavirus pandemic”.

Ward said the US could “fully anticipate a rise in anti-Asian violence” as the coronavirus crisis continues.

Trump and his administration have come under fire for repeatedly calling the novel coronavirus the “Chinese virus”. Trump has increasingly targeted China, noting that the virus was first reported in the city of Wuhan in 2019.

Critics have accused Trump of fuelling bigotry and putting Asian Americans in harm’s way with his rhetoric.

Shannon Minter, legal director of the National Center for Lesbian Rights, said there was an “explosion in the number of groups across the country that are targeting LGBT people.”

But the “shocking and cruel” policies of the Trump administration, such as recent measures to block transgender people from being housed in shelters, could put those already-threatened deeper in danger during the coronavirus pandemic.

Furthermore, an increase in proposed bills across the US that would block transgender people from activities like obtaining new identification that matches their gender could affect access to healthcare and benefits.

The Trump administration, for its part, has denied racist motivations. Trump has claimed to be a friend of the LGBT community, though many individuals and organisations disagree.

While there have been positive steps in the past year, including Facebook’s decision to ban white nationalist rhetoric, there is still reason to be concerned.

The internet continues to be a viable means of spreading hateful ideology that some fear is being echoed in the halls of power.

Brooks concluded by saying that hate “shows no signs of slowing down” in the US.