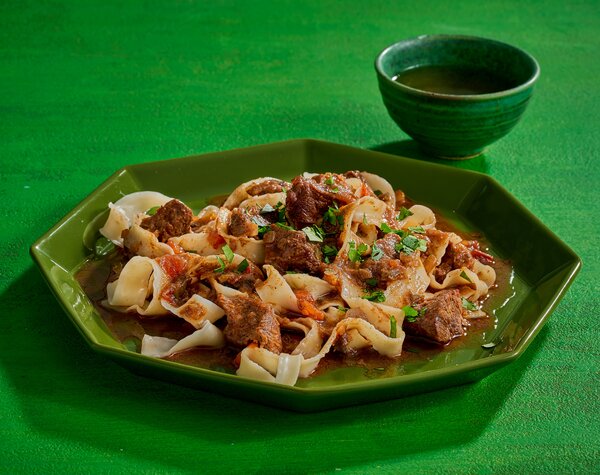 Good morning. When our Tejal Rao fell ill with Covid-19 a while back, she lost her sense of smell. It’s a common neurological side effect of the virus, but troublesome for a journalist who writes about food. “Without smells to guide me,” she wrote for The Times this week, “my sense of taste faded and food flattened out, going gray and muted, dull and lifeless. Cheese became rubber and paste. Popcorn turned into thorny foam.”

Tejal was isolated and scared, worried that it would be a permanent condition, that she wouldn’t be able to do the work she loves. But then she ordered a no-contact delivery of mapo tofu and delighted in the numbing, spicy mala flavor of it and suddenly felt hopeful. “I could taste with some dimension,” she wrote, “in color, with exhilaration. Or at least, despite the anosmia, I could feel as if I were tasting.”

And this, in turn, led her back to cooking, and in particular to cooking a mala beef braise (above) that she learned from Jason Wang, of the Xi’an Famous Foods restaurants in New York. She’s since made it with mushrooms in place of meat. She’s used the sauce to poach eggs, to drizzle over rice and to simmer tofu. “His simple recipe is a gift,” Tejal wrote, “and a way to keep my appetite up while I’m still recovering.”

I’m thinking there may be some in your circle in similar circumstances — you might well be in similar circumstances yourself. So I pass Wang’s gift along to them, to you. But I also encourage everyone else to make the dish, and to delight in its tingly, sweat-bringing intensity. It’s a thrill at a time that needs it, euphoria against the backdrop of the same-old stuff you’ve been making for weeks.

To which end, you should also take a look at this immensely flavorful Earl Grey tea cake with dark chocolate and orange zest, and while you’re at it, at this cover-band rendition of chicken shawarma, made in the oven and not on a spit.

How about a creamy spinach-artichoke chicken stew? (You can make it in a slow cooker if you like: Here’s how.) Or some fried eggs with garlicky green rice? A one-pan pasta with harissa Bolognese?

And I’d definitely like to make some baked goods, to nibble after dinner, to eat for breakfast, to drop off with neighbors: fudgy Nutella brownies, for instance, or salted chocolate chunk shortbread cookies. Maybe this carrot loaf cake with tangy lemon glaze.

There are many thousands more recipes to delight in waiting for you on NYT Cooking. Go look through them and see what piques your interest. Save the recipes you like. Rate the recipes you’ve cooked. And leave notes on them, either for yourself or for your fellow subscribers, if you’ve come up with a hack or a substitution.

Yes, your fellow subscribers. Subscriptions allow NYT Cooking to continue. They’re our life blood. I hope if you haven’t already that you will subscribe to NYT Cooking today.

In the meantime, we are standing by at [email protected] should anything go awry while you’re cooking or using the site. It won’t happen in real time, but someone will get back to you, I promise.

Now, it’s a long distance from chickpeas and chile crisp, but here’s new fiction from Allegra Goodman in The New Yorker, “A Challenge You Have Overcome.”

Today is the home cook and television personality Graham Kerr’s birthday. He is 87. My colleague Kirk Johnson caught up with the former “Galloping Gourmet” at home in Washington a few years ago, and it’s a delightful read.

In case you missed it, here is the Times obituary for Sylvain Sylvain of the New York Dolls, who died last week at 69. And here he is with the Teardrops, “Formidable,” live in 1981.

Finally, I don’t know if you want to read William Feaver’s “The Lives of Lucian Freud: Fame, 1968-2011.” But you definitely want to read Dwight Garner’s review of the volume, in The Times. So do that and I’ll see you on Sunday.