BBC Weather: Rain to hit some western parts of UK

The weather for the UK this weekend is a bit of a mixed picture, with some areas basking in sunshine and others under a bit of fog or cloud. But with clouds clearing off the coast and burning off in the sunshine, some rare ‘fogbows’ could be spotted by keen weather-watchers.

What is a fogbow?

A fogbow has some similarities to its more common relative, the rainbow.

The traditional rainbow is formed through a process called refraction, when the rays of light in a raindrop are separated out into colours.

A fogbow, however, forms from sunlight interacting with water droplets contained in fog, mist, or cloud.

These water droplets that make up fog are so tiny compared to raindrops – between ten and a thousand times smaller, and nearly always less than 0.1mm in diameter – that the process of diffraction of the light by the droplet becomes a dominant effect. 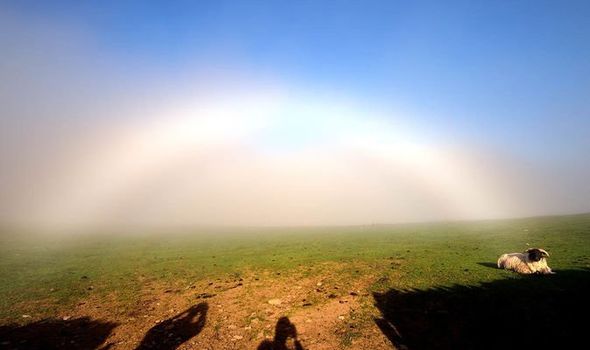 The process of diffraction broadens the reflected beam of light which smears out the colours to give the characteristic ghostly white or very faintly coloured fogbow.

This also makes the fogbow much broader than a rainbow.

The fogbow, also known as a white rainbow or ghost of a rainbow, is seen much more rarely than the common rainbow.

The Met Office said: “Fogbows are often seen alongside another optical phenomenon, also caused by diffraction, called a ‘glory’.

“A glory is a sequence of multiple, pale-coloured rings at the bow’s centre.” 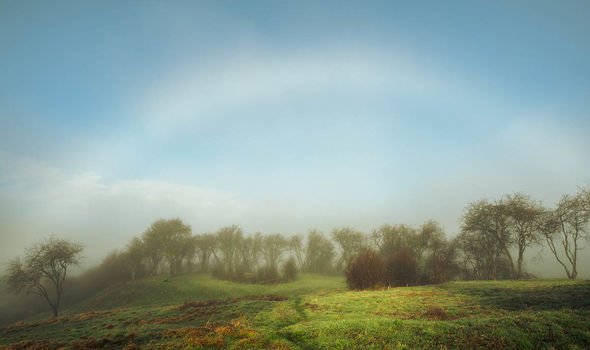 How do fogbows form?

The Met Office said the fog bank needs to be relatively diffused and thin to allow the light to pass through the droplets and create the effect.

To view a fogbow, you’ll have sunlight behind you and water droplets in front.

The Met Office said: “A similar effect can also be seen from aircraft in cloud droplets, when they’re known as cloud bows.” 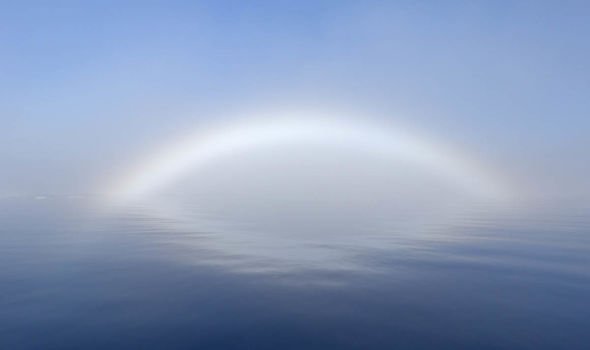 What is the weather forecast this weekend?

For Saturday, BBC weather said: “Cloud will eventually clear the south-east this afternoon.

“Most of England, Wales and eastern Scotland will have a dry, fine, warm day. 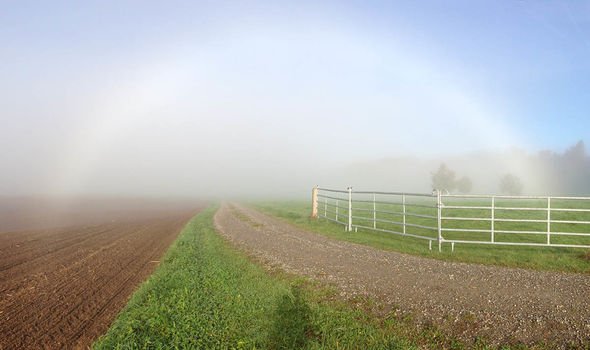 Into Sunday, the forecast expects Scotland and Northern Irealnd to have “a sunnier warmer day and it should remain dry.

“Wales will see sunshine and showers.

“Much of England will be cloudy with spells of rain, but warm sunshine for some.”

And the outlook for early next week expects a mixture of sunshine and rain, with temperatures remaining near normal for the time of year.