An Aboriginal chief’s violent arrest in Canada has been captured on dashcam footage – prompting Prime Minister Justin Trudeau to say black and indigenous people do not feel safe in the country.

The shocking 12-minute video shows a Royal Canadian Mounted Police officer hold his arm and elbow up as he pushes Athabasca Chipewyan First Nation Chief Allan Adam to the ground.

In the clip – taken on 10 March in Alberta’s Fort McMurray – the officer is seen repeatedly punching Mr Adam in the head. 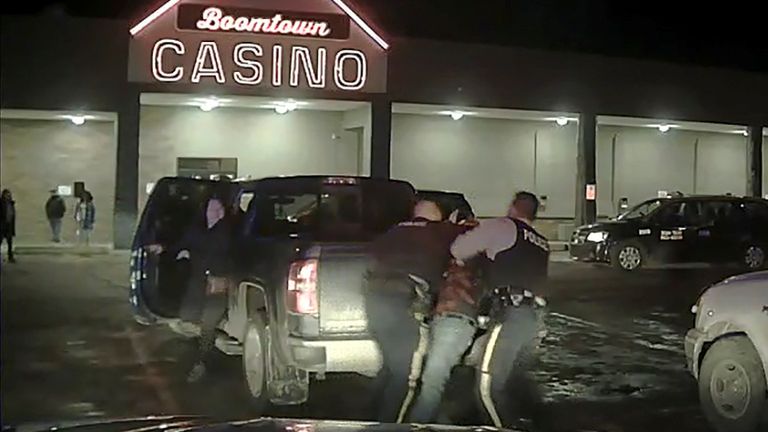 Mr Trudeau said he had “serious questions about what happened” in the “shocking” video, and called for an independent and transparent investigation.

“We also know that this is not an isolated incident,” he said.

“Far too many black Canadians and indigenous people do not feel safe around police. It’s unacceptable. And as governments, we have to change that.”

The Athabasca Chipewyan First Nation said the Royal Canadian Mounted Police video was released publicly as part of a court application to get criminal charges against Mr Adam removed. The RCMP said in a statement that the dashcam video has been reviewed by supervisors and “it was determined that the members’ actions were reasonable and did not meet the threshold for an external investigation.”

RCMP Commissioner Brenda Lucki initially said she “can’t say for sure” if there is systemic racism in the force, but later said in a statement that she should have said “definitively that systemic racism exists in the RCMP”.

“Throughout our history and today, we have not always treated racialised and indigenous people fairly,” she said.

Mr Adam’s lawyer, Brian Beresh, has filed a court motion to have the criminal charges dropped.

“All of this resulted from an expired license plate tag. The video speaks for itself,” Mr Beresh said in a statement.

The Athabasca Chipewyan First Nation called for the officers involved to be punished and criminal charges brought.

He noted that although aboriginal people represent 5% of Canada’s population, they make up 30% of the prison population.