Surge in US coronavirus cases comes as the country reopens, raising concerns on the national response to the pandemic. 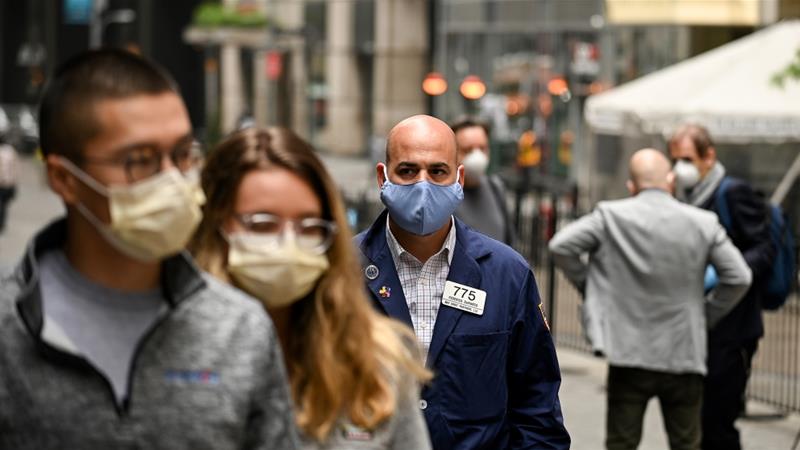 The United States on Wednesday passed the three million mark in confirmed coronavirus cases, according to a Johns Hopkins University tally, as the pandemic surges throughout much of the country, presenting challenges in testing.

Four months into the US coronavirus outbreak, Americans confronted with an alarming resurgence of the scourge are facing long lines at testing sites and going a week or more without receiving a diagnosis. Some sites are running out of kits even as testing is ramped up.

Labs are reporting shortages of materials and do not have enough workers to process the tests, leading to severe backups that could worsen as economies reopen and new infections emerge.

Scenes of testing sites turning away people and motorists waiting in the summer heat in long lines separated into numerous lanes by traffic cones have left Americans frustrated and wondering why the US cannot seem to get its act together, especially after it was given fair warning over the past several months as the virus spread from China to hot spots such as Italy, Spain and New York.

“It’s a hot mess,” 47-year-old Jennifer Hudson of Tucson, Arizona, told The Associated Press news agency. “The fact that we’re relying on companies and we don’t have a national response to this, it’s ridiculous … It’s keeping people who need tests from getting tests.”

It took Hudson five days to make an appointment through a CVS pharmacy near her home. She managed to book a drive-up test on July 5, more than a week after her symptoms – fatigue, shortness of breath, headache and sore throat – first emerged. The clinic informed her that her results would also probably be delayed.

The number of tests a day in the US is up to about 640,000 on average, an increase from about 518,000 two weeks ago, according to an AP analysis. Newly confirmed infections per day in the US are running at more than 50,000, breaking records at practically every turn.

In an especially alarming indicator, the percentage of tests coming back positive for the virus is on the rise across nearly the entire country, hitting almost 27 percent in Arizona, 19 percent in Florida and 17 percent in South Carolina.

As more people are tested, an increase in the raw number of positive tests is to be expected. But if the virus is being brought under control, then the percentage of positive results relative to the total number of tests should be coming down.

The White House has stated its support for schools reopening in time for the first semester as the pandemic spreads.

“We’ve got to reopen our schools,” Vice President Mike Pence, head of the national coronavirus task force, said at a briefing on Wednesday, in order to “keep the momentum” of the economy.

President Donald Trump has made the economic reopening of the US a top priority. Trump pushed for reopenings after months of lockdowns that may have helped increase the spread of the virus.

Trump threatened to cut off funding to schools that do not open and criticised the Centers for Disease Control and Prevention (CDC) guidelines for reopening schools as “very tough and expensive”.

I disagree with @CDCgov on their very tough & expensive guidelines for opening schools. While they want them open, they are asking schools to do very impractical things. I will be meeting with them!!!

Pence downplayed the comments, saying the Trump administration was working hard to save lives.

The US has more than 131,000 confirmed coronavirus deaths, the highest of any country in the world.