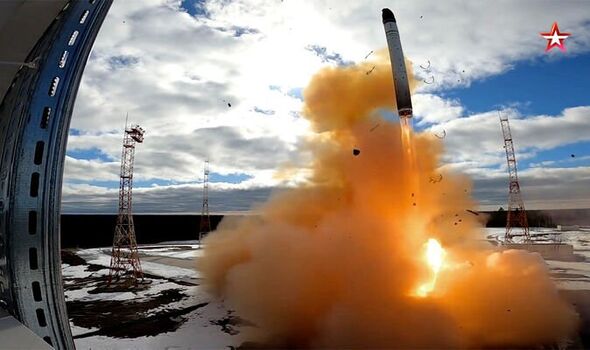 Officials in Kamchatka Krai, in Russia’s Far East, have warned of the closure of “the fall area for movements of people, equipment of all kinds, aviation flights, and tourist groups”, as Moscow gets ready to deploy the Satan-2, officially called the RS-28 Sarmat intercontinental ballistic missile (ICBM). Ahead of its test launch, which according to the Russian government is to take place between June 6 and 10, several districts of the region are under confinement in the face of the possible “fall of the separating parts of the launch vehicle or its fragments, as well as in the event of an emergency in the field”. Vladimir Putin’s administration test-fired the Satan-2, which covers an area of 6,200 to 11,180 miles, on April 20. After, it said its “practice warheads” had struck assigned targets. The announcement of the launch follows reports of strategic weaknesses in Russia’s military, with the UK’s Ministry of Defence (MoD) saying: “Russian air activity has been largely restricted to deep strikes using air and surface-launched cruise missiles to disrupt the movement of Ukrainian reinforcements and supplies.” These strikes alone, it added, “have failed to have a meaningful impact”, while “Russian stocks of precision-guided missiles are likely to have been significantly depleted as a result”.

FOLLOW BELOW FOR LIVE UPDATES ON THE CONFLICT IN UKRAINE…

Hello, I’m Teresa and I’ll be bringing you all the latest developments on the conflict in Ukraine. Please feel free to get in touch with me as I work if you have a story or tips to share! Your thoughts are always welcome.