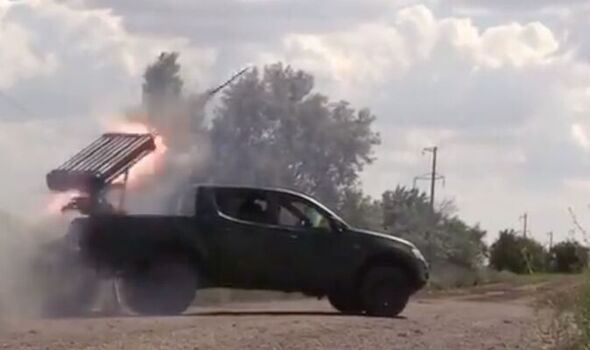 Ukraine’s army announced it had launched airstrikes on Zmiinyi Island, also known as Snake Island, causing “significant losses” to Russian forces. In a post on Facebook, the military’s southern operational command said it had used “aimed strikes with the use of various forces” on the island. The command added: “The military operation continues and requires information silence until it is over.”

The MoD said: “Heavy shelling continues as Russia pushes to envelop the Sieverodonetsk area via Izium in the north and Popasna in the south.

“Russia is highly likely preparing to attempt to deploy a large number of reserve units to the Donbas.

“The Russian authorities have not released the overall number of military casualties in Ukraine since March 25.

“The DPR casualty rate is equivalent to around 55 percent of its original force, which highlights the extraordinary attrition Russian and pro-Russian forces are suffering in the Donbas.

“It is highly likely that DPR forces are equipped with outdated weapons and equipment.

“On both sides, the ability to generate and deploy reserve units to the front is likely becoming increasingly critical to the outcome of the war.”

Good morning from London. I’m Tara Fair, I’ll be bringing you all the latest developments on Ukraine. Please feel free to get in touch with me as I work if you have a story or tips to share! Your thoughts are always welcome.