Following a week of mystery attacks on the occupied peninsula – which have caused chaos to rail links – at least four more explosions rocked a major Russian military airport on the Moscow-controlled territory. 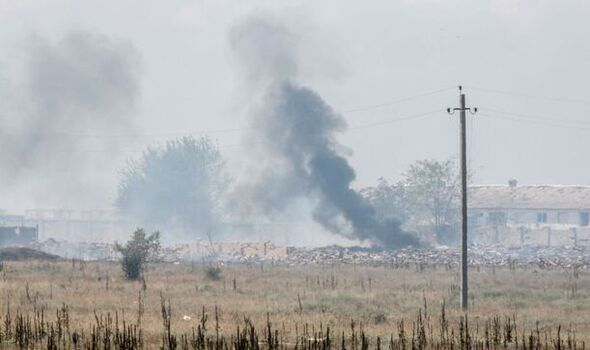 Kremlin forces are said to have shot down a drone at the Belbek military airport, north of the Black Sea fleet’s headquarters in Sevastopol, during the apparent attack.

While no one has claimed responsibility for the latest in a string of similar raids in Crimea, Ukraine has repeatedly hinted at being behind them.

There have been numerous blasts over the past 10 days at Russian installations in Crimea, which Putin annexed in 2014.

One such attack on the Saky airbase destroyed more than half of the Black Sea Fleet’s naval aviation combat jets, western officials said yesterday.

The attacks in Crimea come as Ukrainian President Volodymr Zelensky’s forces are believed to be preparing a massive counter-offensive in the south the country in the coming weeks.

The defending military have already made territorial gains in the Kherson region and efforts continue to retake Kherson city.

And Putin’s forces are not just struggling on the ground. The head of Britain’s GCHQ intelligence service yesterday said Russia has lost the war in cyberspace.

Sir Jeremy Fleming said: “Putin has comprehensively lost the information war in Ukraine and in the west. Just as with its land invasion, Russia’s initial online plans appear to have fallen short.”

The intelligence chief, wrote in The Economist that both countries have been using their cyber capabilities in the war in Ukraine. But he said the Kremlin had lost out. However, he warned: “We should not underestimate how Russian disinformation is playing out elsewhere in the world.”

Sir Jeremy said Russia had deployed WhisperGate malware to destroy and deface Ukrainian systems. He said Moscow has used the same playbook before on Syria and the Balkans and said online disinformation is a major part of Russia’s strategy. However, GCHQ has been able to intercept and to provide warnings in time.

Without going into any detail, Sir Jeremy said the UK’s National Cyber Force could respond to Russia by deploying a UK military unit that employs offensive cyber tools.

His words came as Western officials said Putin’s war was at “near operational standstill”. A government briefing said attacks behind the Russian front line are having a “significant psychological effect” on Kremlin military leaders – and are being witnessed by the Russian public.