Large swathes of the UK will be set for a weekend washout across August 20 and 21, with one forecaster indicating “violent” thunderstorms to commence in the week starting August 22. WX Charts, an interactive weather model, shows a huge band of rain moving in from the east by 6pm on the Saturday, blanketing most of the north and large parts of the south west. Typically, the south east, which has suffered with a lack of rain over the summer remains untouched. That’s until Sunday where the band finally reaches parts of Essex, London, Kent and Sussex.

These showers start to break-up, becoming far more scattered, but a big cluster of rain appears to settle over central and northern parts once again by 6pm on Sunday.

Early indications show by the Monday heavy and potentially torrential rain will centre on the south west.

But senior meteorologist at British Weather Services, Jim Dale, told Express.co.uk there are some signs of thunderstorms hitting from the Monday which will not only spell the start of the end of summer, but could also cause flash flooding in some places.

He said: “It’s the breakdown coming ahead of time and into the south and southeast, it could be violent thunderstorms but one to watch as it is still a week away.” 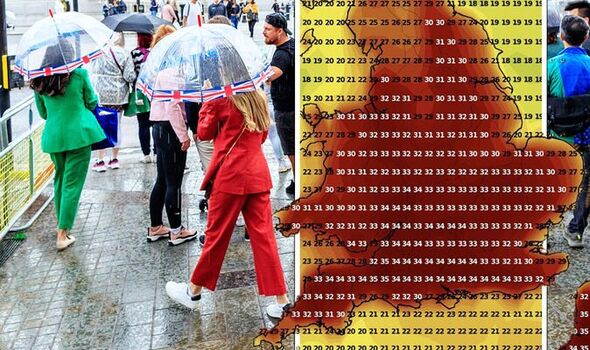 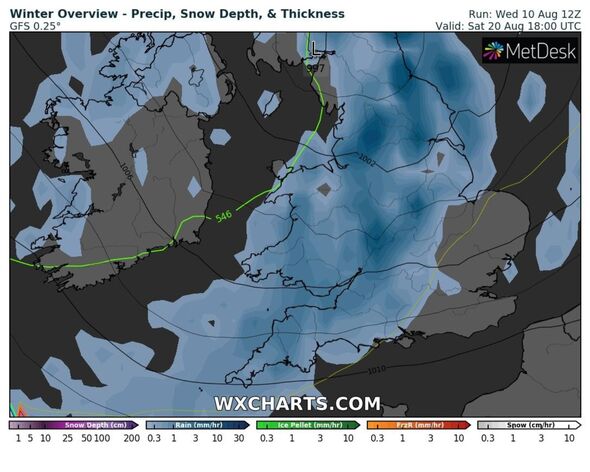 He added: “Hot and humid air will be replaced by cooler air, it is a classic ending with a bang situation with possible flood scenarios.”

The Met Office, however, has remained on the side of caution.

A spokesman told Express.co.uk: “There’s a potential for some thundery activity later in the month but it’s simply too early to put specific dates, severities or locations on it.”

The weather will be on the opposite side of the spectrum in comparison to the four days of this week, where an amber extreme heat warning has been put in place by the forecaster. 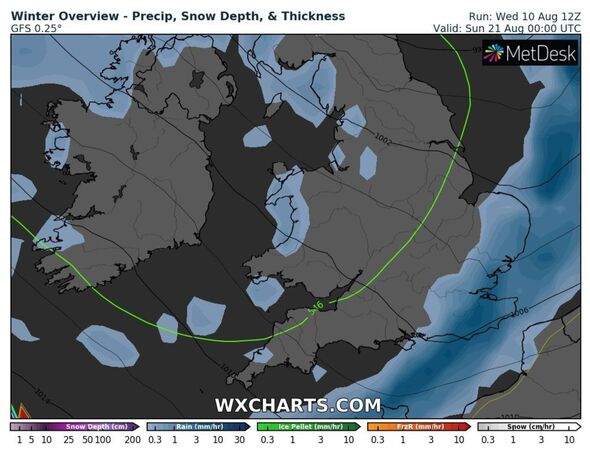 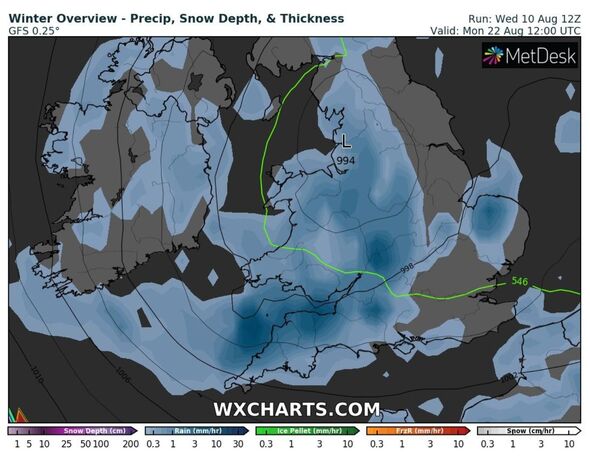 Met Office deputy chief Meteorologist Dan Rudman said: “Thanks to persistent high pressure over the UK, temperatures will be rising day-on-day through this week and an extreme heat warning has been issued.

“Temperatures are expected to peak at 35C on Friday and Saturday, or even an isolated 36C on Saturday. Elsewhere will see temperatures widely into the high 20s and low 30s Celsius.

“Coupled with the high daytime temperatures there will be some warm nights, with temperatures expected not to drop below the low 20s Celsius for some areas in the south.”

The forecaster has ramped up its Fire Safety Index threshold to exceptional for large areas of the south and Midlands, and there is also a heat health warning in place until Saturday, August 13.

A risk of thunderstorms and scattered showers also persists throughout the first half of next week.

Maps show the south west map cop the brunt of the first large-scale shower on Wednesday, August 17 before they again become far too scattered to make an impact on the UK’s drought areas.

This is especially evident as maps show the end of August looking somewhat dry.

Mr Dale added: “It will help for sure but will be variable with some drought areas likely to miss out. We really need sustained rain which looks unlikely.”