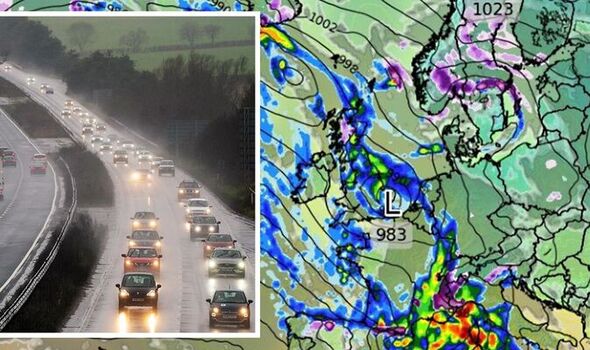 Volatile weather fronts thrown in from the Atlantic will bump into high-pressure buildings over Norway and Sweden. Instead of sweeping quickly across the UK, they will stall, putting swathes of the country in the firing line for a relentless deluge.

Meteorologists warn rain will set in later this weekend before the heavens open from Monday.

Jim Dale, meteorologist for British Weather Services, said: “There is a blocking high-pressure system over Scandinavia, and this will bring slow-moving frontal systems across Britain next week.

“These fronts will bump against the high which will stop them moving through quickly, leading to another week of wet weather.

“This situation of slow-moving frontal systems can bring a lot of rain in a short time, and this can spell flood danger, and while there may be some wind, the rain is going to be the main issue.”

Unsettled weather will be driven by a powerful jet stream which has swerved south across Britain acting like a conveyor belt for storms.

The jet stream, a fast-flowing ribbon of air high in the atmosphere, forms a channel between polar air over the Arctic and milder air to the south.

Between the two air masses lies the Polar front, which has followed the southwards path of the jet stream over Britain to drive the cold weekend weather.

Mr Dale, author of Weather Or Not? said: “The polar front has moved southwards and brought polar air over the UK, hence the lower weekend temperatures.

“The jet stream has also come southwards, and this will help to steer unsettled weather systems into Britain.

“I do not see any change next week from the wet weather we had last week, and while it will be windy, this will probably be localised.”

The raging jet stream will power a ‘breeding ground’ for choppy weather systems, according to the Met Office.

However, as the Polar vortex shifts next week it will bring milder air in from the south causing temperatures to rise.

Met Office meteorologist Alex Deakin said: “A powerful jet stream developing over the Atlantic will drag areas of low pressure over the UK.

“This active jet stream will remain pretty intense into the early part of next week, and it is likely to be a breeding ground for areas of low pressure, sending them our way.

Milder temperatures are likely to set in through the week with the arrival of the Polar vortex unlikely to trigger a ‘beast from the east’, he added.

He said: “The Polar vortex at the moment is particularly strong.

“When the Polar vortex weakens, it can indicate that the UK will turn colder, and it can be an indication of seeing a ‘beast from the east’.