The Met Office has issued yellow weather warnings for snow and ice across parts of the UK this week as temperatures drop. Wintry showers, sleet and ice are forecast to hit the north of England, Scotland and Northern Ireland.

Elsewhere, wind, rain and cold temperatures are forecast with heavy rain in the west on Thursday.

The severe weather warnings for snow and ice follow days of heavy rain, adding to already dangerously swollen rivers across the UK.

Weeks of concurrent storms have caused flooding across the UK, and at the time of writing, there were 217 flood warnings in place.

Of these, 171 were flood alerts, warning flooding is possible – be prepared. 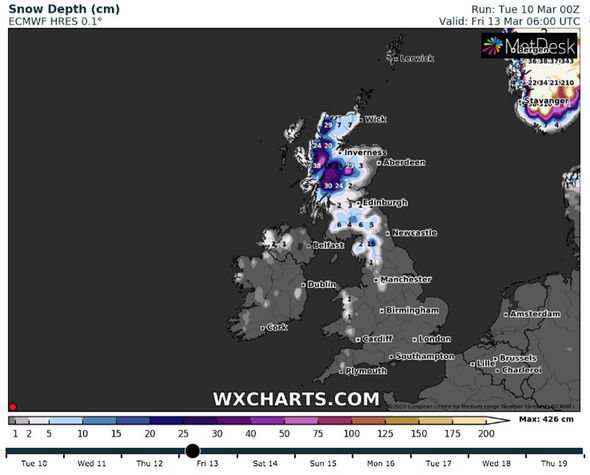 In total 46 flood warnings are in place, warning flooding is expected and immediate action is required,

Now more rain and even snow are on the way across the UK, with yellow snow and ice warnings in place.

Maps from Windy, WXCharts and Netweather show snow accumulations across the UK this week, heaviest in the Met Office warning areas of the North of England, Northern Ireland and Scotland.

According to Windy.com, heavy snow accumulations can be seen across Scotland and the North of England. 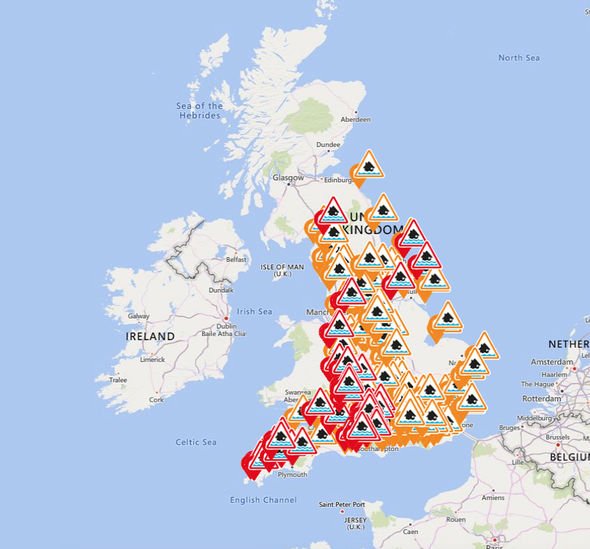 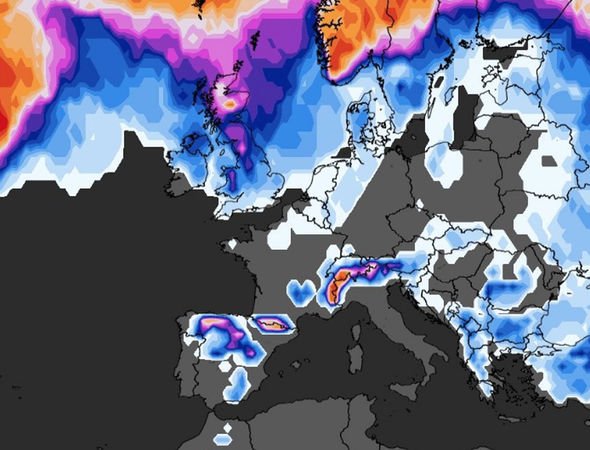 Netweather snow risk maps also show snow across Scotland, as well as heavy flurries to Northern Ireland and the North of England.

Finally, snow depth maps from WXCharts show snow reaching up to 14.9inches (38cm) across the hills of Scotland towards the end of this week.

Met Office snow warnings are in place across the UK over Wednesday and Thursday as showers will fall as sleet and snow from Wednesday evening onwards.

The Met Office warns some accumulations of snow are expected, but mostly above 150m.

The snow and ice warning is in place from 9pm on Wednesday through to 10am on Thursday.

This will be accompanied by ice, which could lead to slips and falls as well as difficult driving conditions on untreated roads.

Rush hour on Thursday morning could be especially impacted in the warning areas, as wet and snowy roads turn icy overnight. 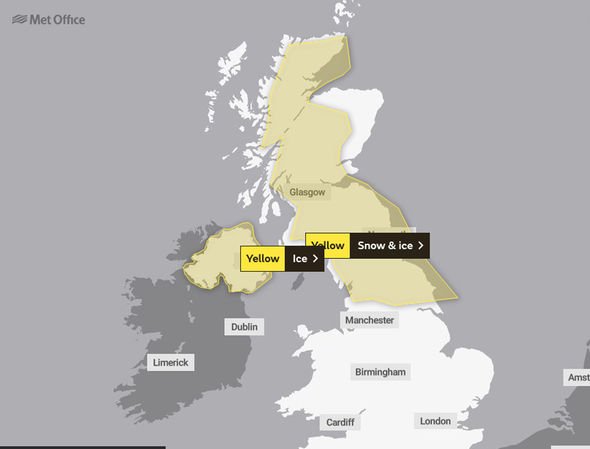 A further warning for ice is in place, between 9pm on Wednesday until 10am on Thursday.

This is for County Antrim, County Armagh, County Down, County Fermanagh, County Londonderry and County Tyrone.

The Met Office warns rain is expected over the east of Northern Ireland on Wednesday evening before spreading west across the country.

This will create wet roads and paths, and as temperatures drop overnight icy stretches are expected to form.

There could also be some sleet and snow showers mixed in, however, any accumulations will be small.

Southern UK cloudy with outbreaks of rain. Elsewhere, clear spells and windy with evening showers in the North and West becoming heavier and more frequent later. Colder than last night.

Early cloud and rain over southern UK clearing leaving the rest of Wednesday fine and generally dry. Elsewhere, windy, showery and colder than today with showers wintry on northern hills.

Outlook for Thursday to Saturday

Thursday windy with showers, heaviest and most frequent in the west and wintry on hills. Less windy Friday with many places dry. More cloud on Saturday with rain in places.