Forecasters predict the mercury will plunge to well below freezing from the start of next week, with temperatures plummeting to as low as -5C on Friday, December 4. The freezing temperatures are set to coincide with 48-hours of snowfall, which is expected to hit Scotland and even spread to the southeast of England from Thursday, December 3, weather charts suggest.

There is a high risk of snow across Scotland next week, with parts of England and the southeast also at risk of seeing snow showers.

Netweather’s snow risk charts show there is currently a 100 percent risk of snow across western Scotland on Thursday, December 3 at 6am.

The risk is highlighted in a colourful weather chart, which shows the northwest of Scotland turn red and white to indicate the high snow risk.

As the day progresses, the risk of snow moves further south, covering the east of Scotland and northeast of England.

A further bout of snow is also expected in the south of England. 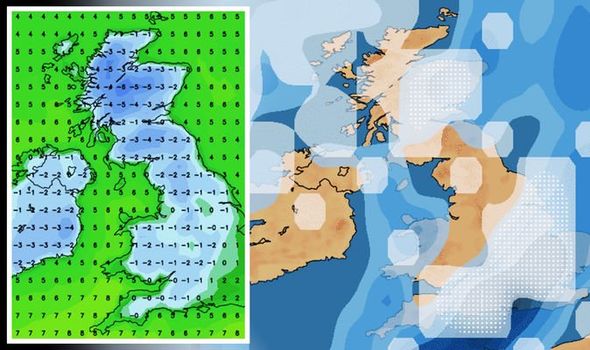 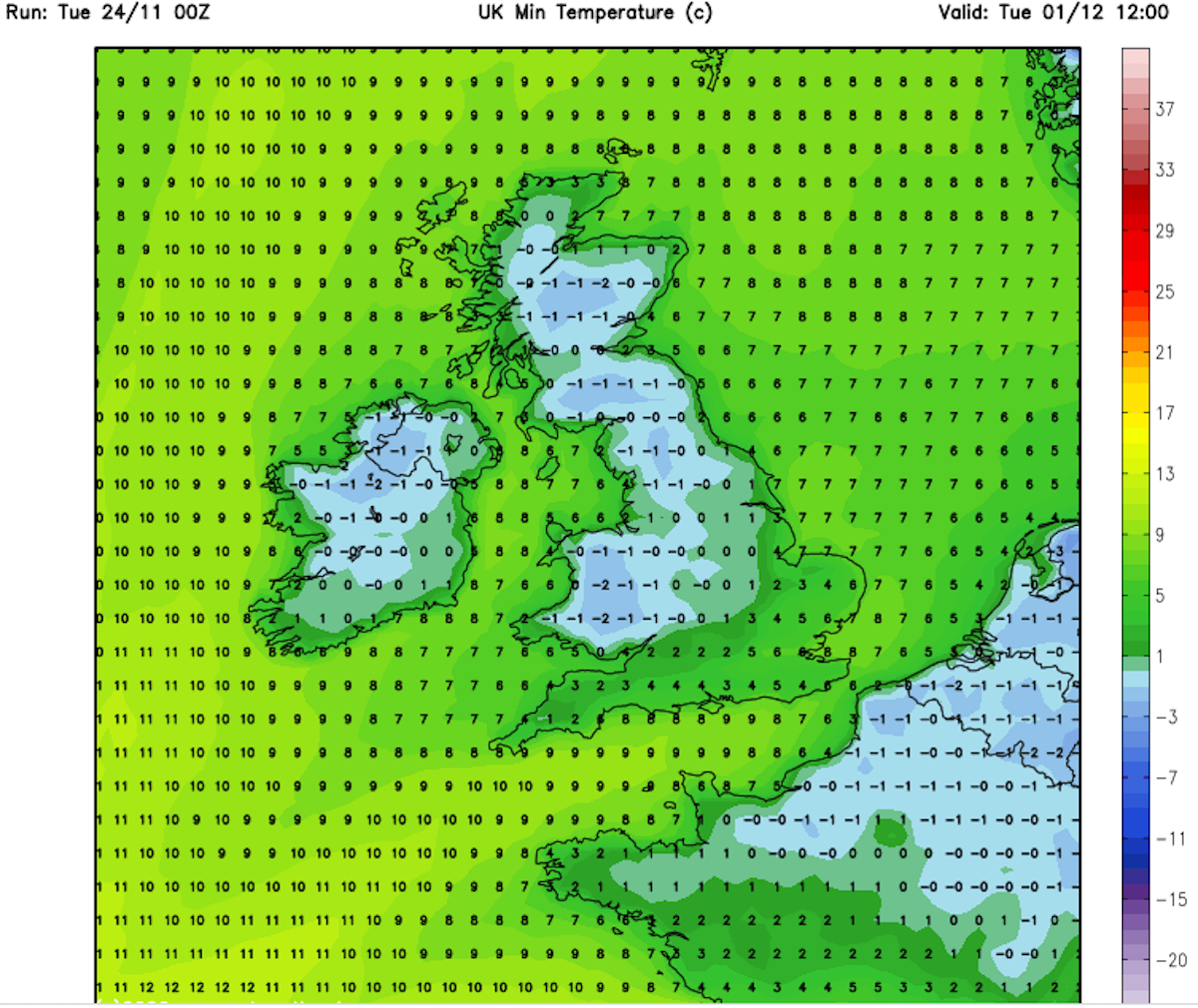 The weather map, valid for 6pm on December 3, shows the northwest and parts of north Wales turn red with a high snow risk; while parts of the south of England are covered with a medium risk of snow.

The green and yellow colours covering the south indicate there is between a 30 to 75 percent risk of snow at this time.

By Friday morning at 6am the snow risk has moved further south still, covering the capital and other parts of the southeast with a medium snow risk.

At 6pm, northwest Scotland is set for another high risk of snow. 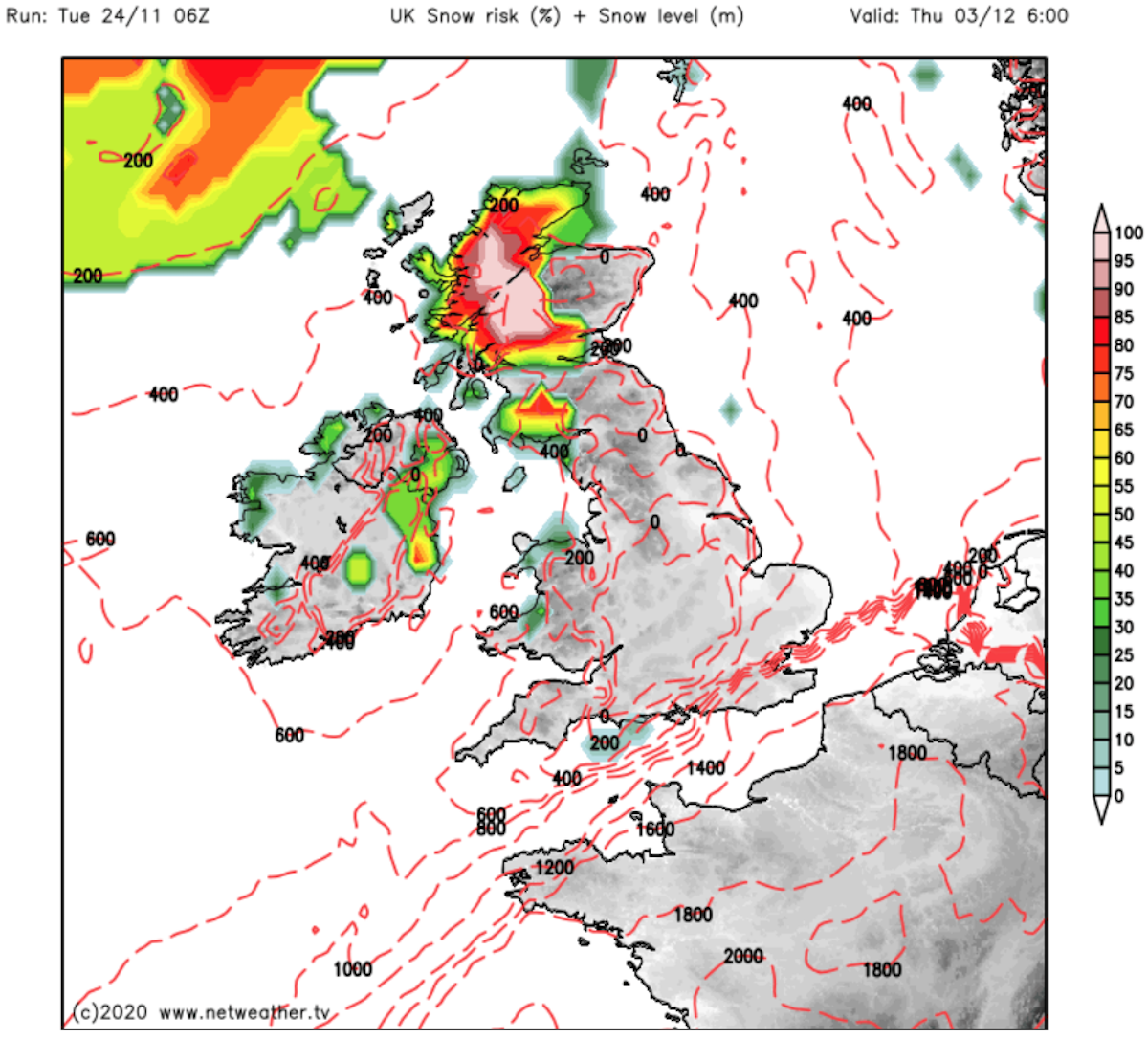 The risk of snow continues until Saturday, December 5 at 6pm for Scotland.

Forecaster Brian Glaze of the Weather Outlook also expects snow to sweep across the UK during the same period.

A weather map for Thursday, December 3 at 3pm shows up to 5cm of snow is expected across Scotland, Wales and the south of England.

BBC Weather forecasters claim the UK can expect bouts of polar air to sweep across the country from the start of December. 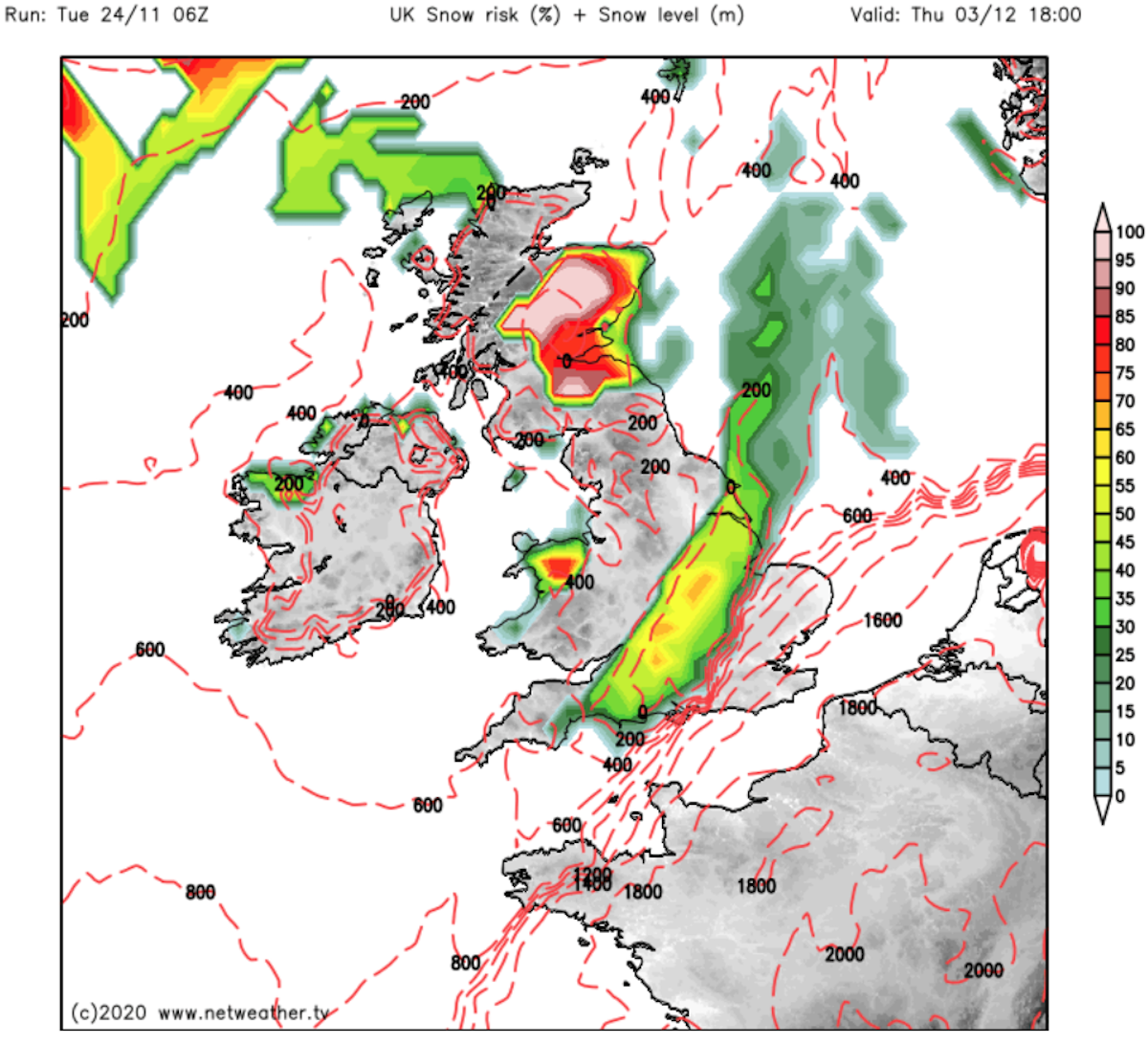 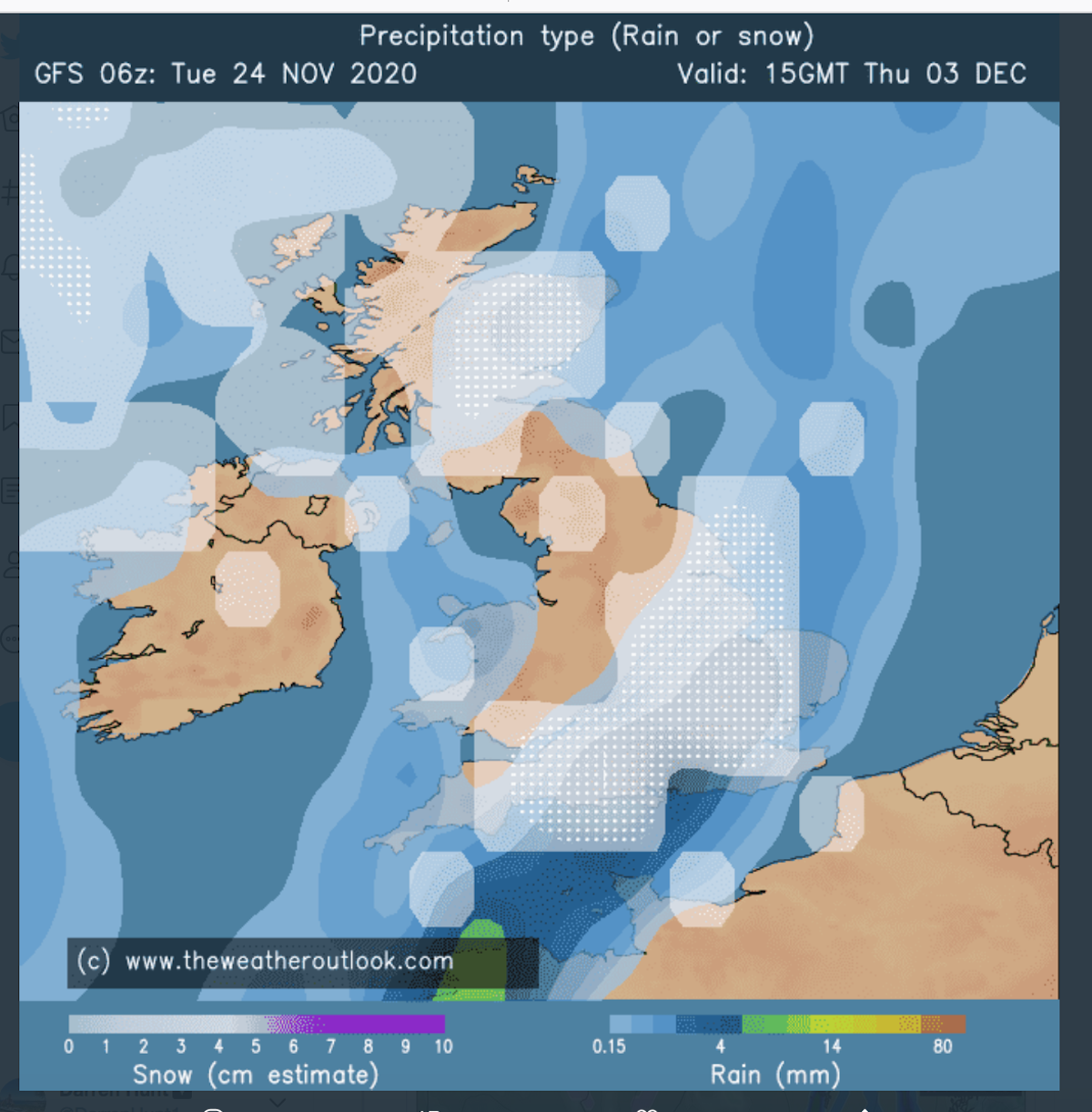 They state: “High in the atmosphere around the North Pole, a belt of strong westerly winds is predicted to become very strong during this week.

“Short-lived ‘shots’ of cold polar air will occasionally sweep out of Greenland and over the UK, especially Scotland.

“This will bring cold and showery days, with some hail, sleet and upland snow in the north and west.” 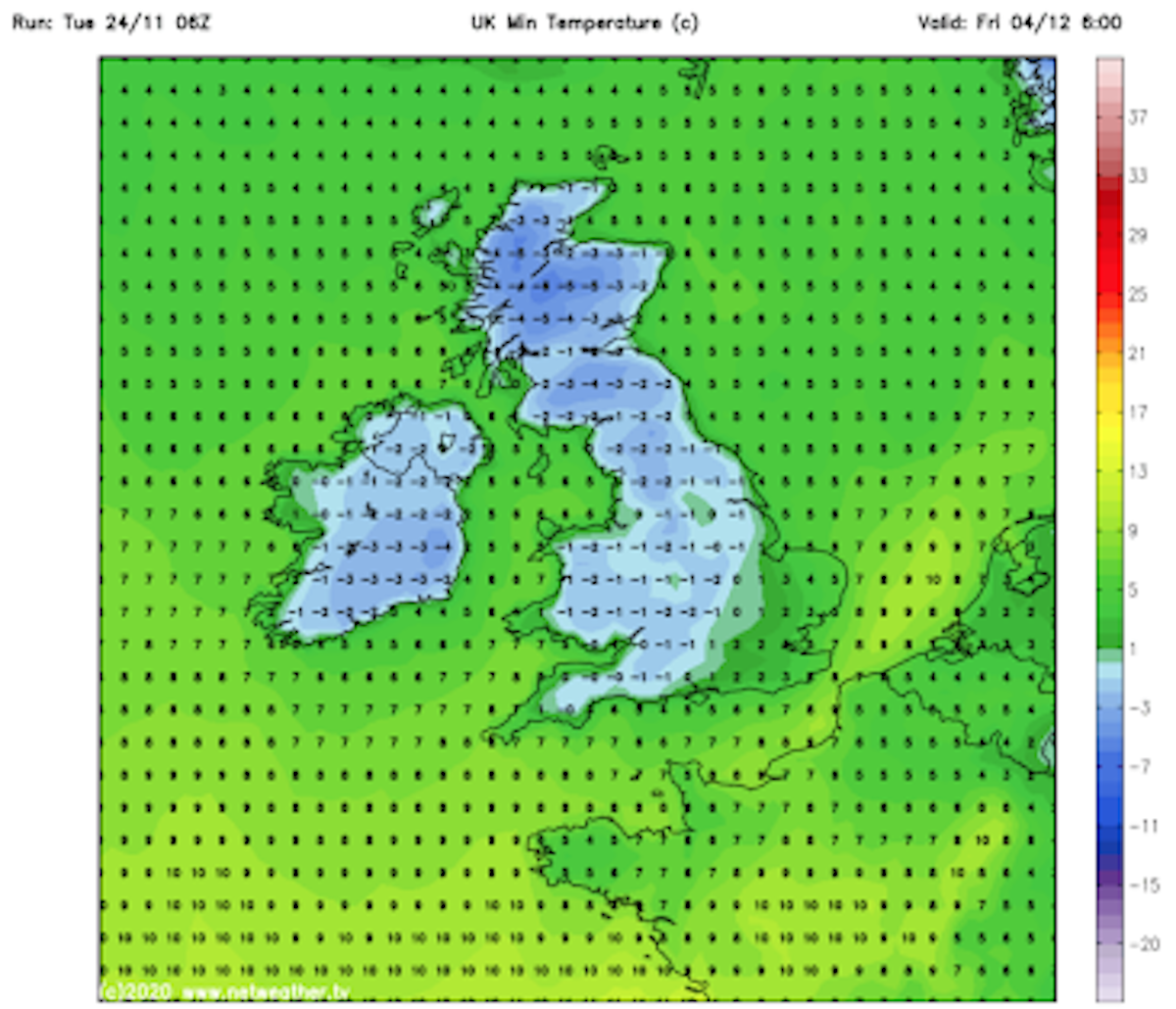 Maps by Netweather show cooler temperatures will start to move in from the start of next week, with the mercury dropping below freezing from Monday night.

As the week progresses temperatures are set to stay around the freezing mark for much of the UK overnight, though the southeast could dodge the cold spell to start with.

By the early hours of Thursday morning, the mercury is expected to drop to -3C in Scotland, settling around 3C in the southeast.

Temperatures are forecast to drop even further in the early hours of Friday morning, with weather maps showing thermometers could drop to as low as -5C at 6am.