Friday will spark the start of a weekend washout in some places, with bands of rain moving across Wales and into the west of the country. Senior operational meteorologist at the Met Office, Annie Shuttleworth, told Express.co.uk: “Southern areas of the UK may see some long-lived showers and possibly thunderstorms on Friday. “The details are still uncertain as they always are with showers at this lead time.” The Met Office’s forecast for Friday and the weekend adds: “Rather cloudy with some sunshine across the south, far west and east Scotland.

“Hot in the southeast Sunday, cooler elsewhere with occasional showers.

“Sunny spells and showers Monday, heavy in the north.” 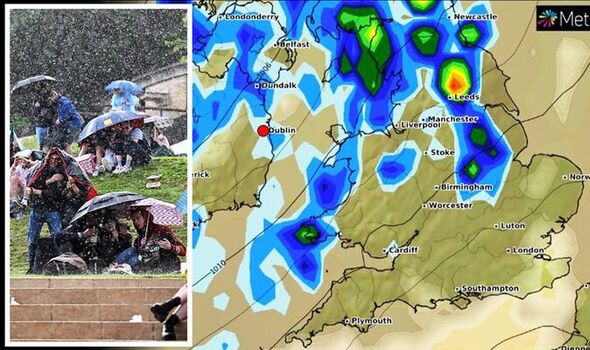 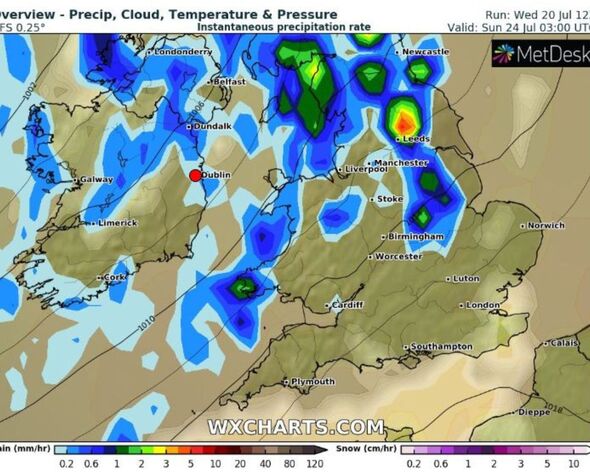 A smaller cluster of rain clouds appears over Southampton at the same time.

These showers continue to move east, covering parts of Birmingham and the midlands by 6pm.

By 6am on Saturday, the country looks far clearer and cooler, but a strong band of rain starts to move eastwards from the Atlantic. 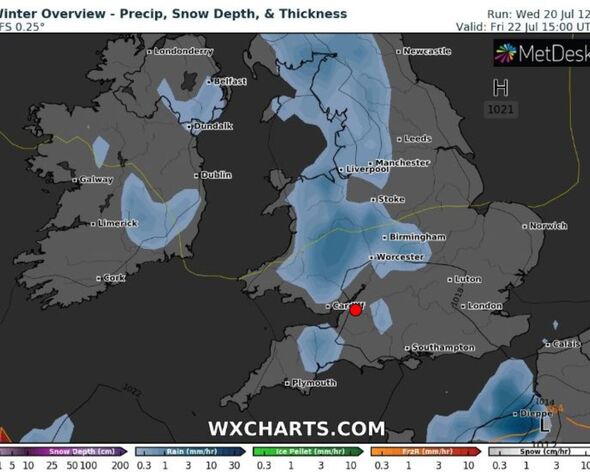 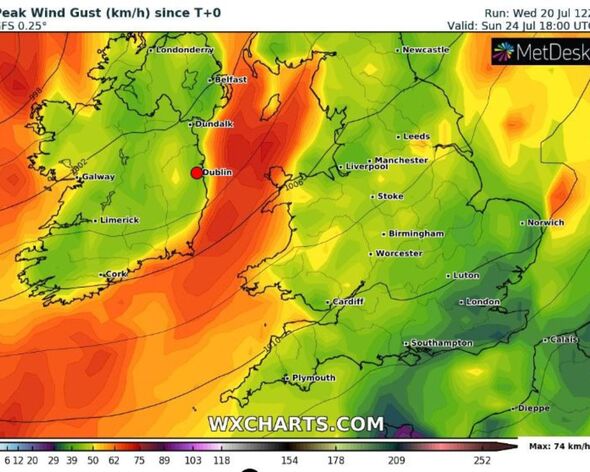 It first comes crashing over Northern Ireland by midday, continuing for much of the day before it disperses into scattered showers over Wales, Bristol and parts of the northwest by midnight.

Sunday appears to be the worst day, with several clusters of rain blanketing much of the northwest and parts of the northeast by midday.

This will also clear up again by midnight, but only for a short spell, as more rain is forecast for these areas by Monday morning.

The pattern will continue for much of next week, the Met Office’s long-range forecast says.

“Outbreaks of rain across the north and west moving southeastwards across the UK on Monday, becoming lighter through the day, with the far southeast probably staying dry.

“The rest of the week sees sunny spells and further showers, which are expected to be most frequent in the north and west at first.

“Light or moderate winds, but fresh or strong in the northwest.”

It appears the northwest will be bearing the brunt of the rain and potentially strong winds, as the south, east and southeastern parts of the country will remain very warm.