But while the hot weather coincides with a bank holiday this Friday, the UK’s lockdown remains firmly in place. This has meant that over the past weeks, many Britons have made use of gardens or balconies to enjoy the sun as much as possible from their homes.

Hot weather maps from WX Charts show a plume of deep red and orange air sweeping over the UK and many parts of Europe.

Temperatures are forecast to soar to a scorching 21C just outside London today.

And on Saturday, London and Kent will see highs of 23C.

Meanwhile, many parts of North Yorkshire, including York, will see a sizzling 22C, according to WX Charts. 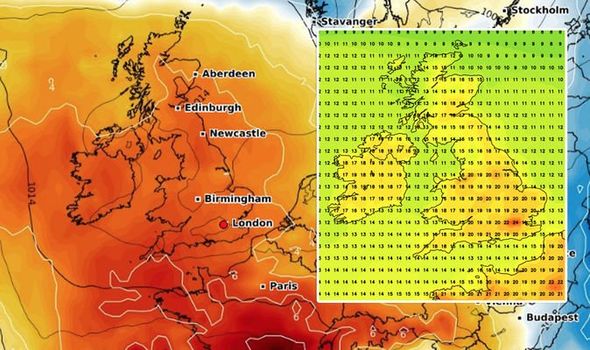 But Bank Holiday Friday will be the peak of the mini-heatwave this weekend, as temperatures may rise to 25C.

Despite this, the heat will bring with it heavy rain at sporadic times in some parts of the UK.

Though most of the UK will be fine on Thursday, a few places in Wales, western and central England may experience heavy showers and possibly some thunder.

And these showers will be more widespread in Northern Ireland. 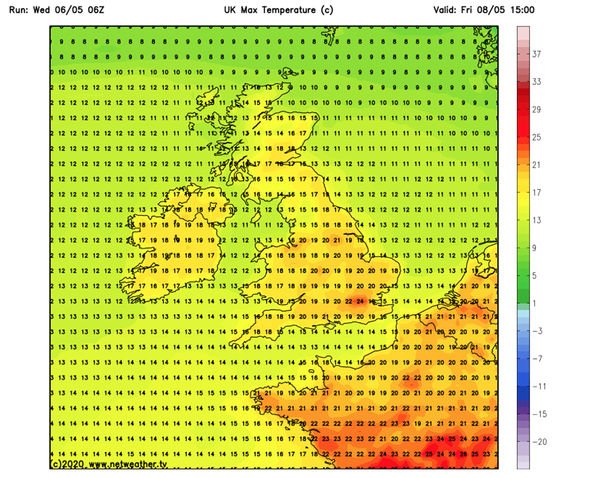 But temperatures will climb into the 20s across southern parts of the UK, while the north of England, Scotland and NI will see temperatures just below 20.

This rain should fade the evening goes on, according to the Met Office, though some may go on towards the west and in northern mainland Scotland.

It will be a similar story for Friday, where temperatures are expected to increase from Thursday.

John Hill from bookmaker Coral has said that the company has cut its odds on Friday being “the hottest May bank holiday” the UK has ever seen. 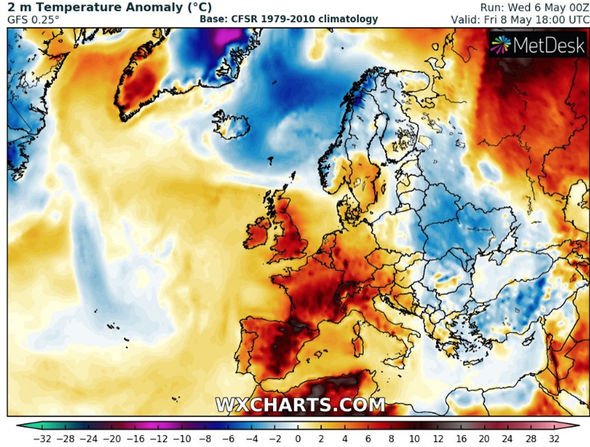 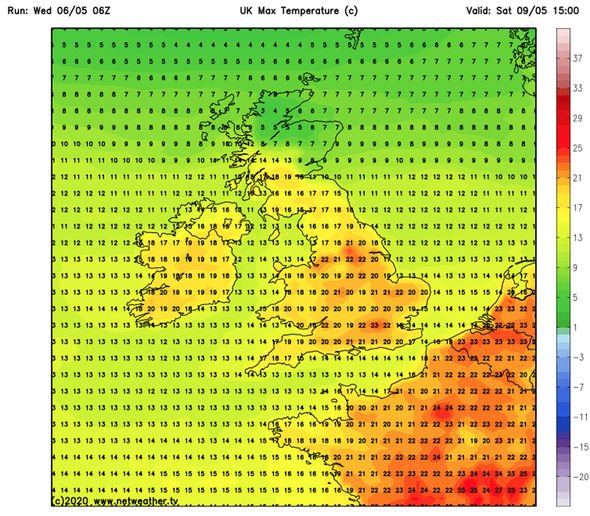 He said: “With temperatures set to rise over the new few days, we have slashed the odds on Friday being the hottest May bank holiday we have ever had in the UK.”

Scattered showers are expected in some parts of England and Wales, which may turn heavy and thundery.

But in Northern Scotland it may be chillier with some rain in places.

Saturday should see the last of this very warm weather, particularly in central and southern areas, though again there may be a few thunderstorms in the afternoon. 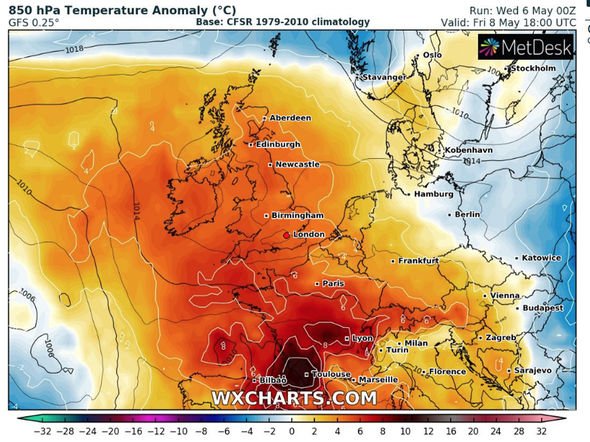 Sunday will bring much colder weather, though, with the Met Office noting that there may be some wintry showers in the north.

The weather is also set to get wetter and windier after temperatures plummet at the end of the week.

For the period from Monday, May 11 to Wednesday May 20, the Met Office claims there will be coastal gales and generally longer rainy spells.

They said: “A few longer spells of rain are possible across southern parts accompanies by strengthening winds and a risk of gales along coasts. 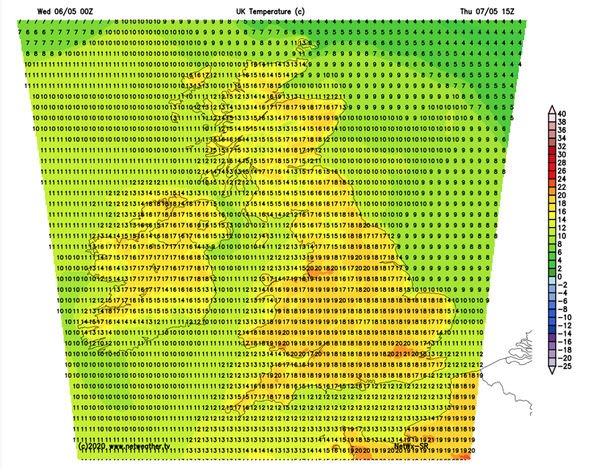 There may even be a chance of some overnight frost in rural parts of the country.

Though across the middle of this period, it is expected to get drier and brighter across the UK with some sunny spells.

Pollen is forecast to be medium across the most of the UK from Thursday to Saturday, with the exception of northern Scotland where it will remain low.

The count will begin to fall to low levels from the north going southwards on Saturday, before becoming low across the whole of the UK on Sunday as temperatures drop.