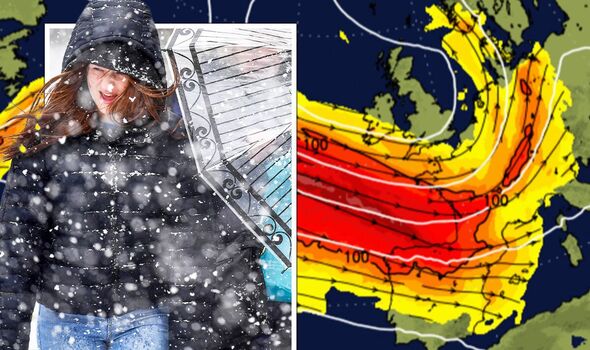 Stormy weather will whip up today as a barrage of s cyclonic low-pressure systems plough into the UK on a high-speed jet stream. Government forecasters have issued warnings for inches of rain across Scotland over the next 24 hours as a raft of Environment Agency flood alerts take force across the country.

A conveyer belt of Atlantic storm systems will hammer the nation through the coming days as forecasters keep watch on a menacing storm system threatening to strike at the weekend.

A swathe of Polar air pulled across Britain by the jet stream at the end of the week will add to the chaos.

Jim Dale, meteorologist for British Weather Services, said: “The main story is going to be the rain, which over the next few days will hit parts of the country which have already seen a lot, so there will be a risk of flooding.

“There will also be some wind with this, and we will see temperatures drop at the end of the week as a dip in the jet stream brings the Polar front across Britain, largely across Scotland but perhaps into northern England.

“There will be the risk of snow in the north of the country if that dip is low enough, so this is going to be one to watch.”

Snake-like twists of the jet stream will drive Arctic air southwards sending the mercury in parts plummeting below freezing, he warned.

In the meantime, temperatures will stay mild for the time of the year as winds come in from the Atlantic, he added.

He said: “The jet stream is meandering and bringing down the Polar front.

“So, in addition to the next few days turning unsettled, it is going to feel cold across Scotland by the weekend.

“Through the start of the week, though, it will be relatively mild and temperate.”

The Met Office has issued warnings for heavy rain across northern Britain today and tomorrow where up to two inches could fall.

As Atlantic winds arrive, snow in parts of the country left from before Christmas will thaw driving the floods.

Met Office meteorologist Craig Snell said: “As we go through the next few days it is likely to stay unsettled across the country.

“We will start to see some milder air return from the Atlantic, but with the jet stream close by, that is always going to indicate a fairly changeable week ahead.

“For most it is going to be a pretty miserable start to Tuesday, with plenty of rain around and as the afternoon goes on another band of rain moves in from the southwest and some of this could be heavy.

“It will be fairly mild, with most places in double figures.”

Western regions will bear the brunt of the wind and the rain, particularly through mid-week, he added.

Meteorologists are keeping a close watch on a low-pressure system threatening to hit the UK this weekend.

Mr Dale said: “It is still early to say for sure, but there is a low coming in at the weekend which could be one to watch.”

A spokesman said: “Please take action to protect yourself and your property and monitor local weather and river conditions.

“Avoid contact with, walking or driving through flood water. Consider activating any property flood protection products you may have.”