Britain has baked in glorious late summer highs over the past few days, with temperatures comfortably sitting around the mid to high 20C for much of the country. This has been accompanied by clear and sunny skies, seeing Brits head in their droves to supermarkets for last-minute barbecue essentials. However, the hot weather will not stay long, as this week conditions are forecast to drastically change.

This weekend Britons revelled in the September warmth, heading to beaches, parks and enjoying time in the garden.

However, forecasters are warning the warmth will soon dissipate as a blast of cold air will track across the UK from the Arctic.

BBC meteorologist Susan Powell said this week will see “big changes” to “our weather” despite summer having “clung on through the weekend”.

Ms Powell said: “By mid-week, it will be much cooler, much windier, and for many, wetter as well. 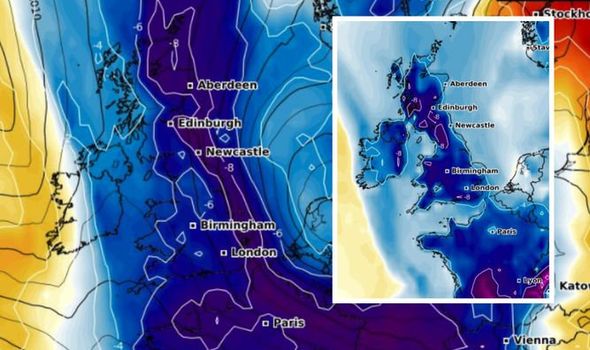 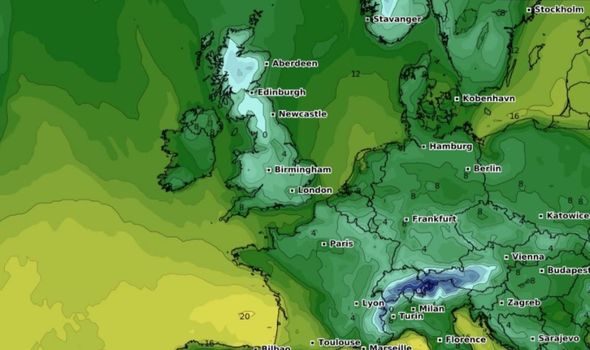 “The reason for the change – we lose the persistent area of high pressure.

“That will still be with us for Monday and Tuesday, [but] areas of low pressure will take over from the Atlantic, eventually dragging in Arctic air.”

Parts of the UK will see frost, and some high mountains of Scotland are forecast to see snow as the temperature well and truly plunges.

Netweather forecasters predict rain for the northwest today, but this will “struggle to make too many inroads further southeast initially”. 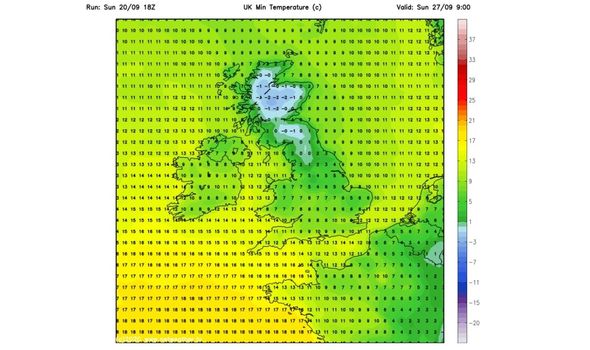 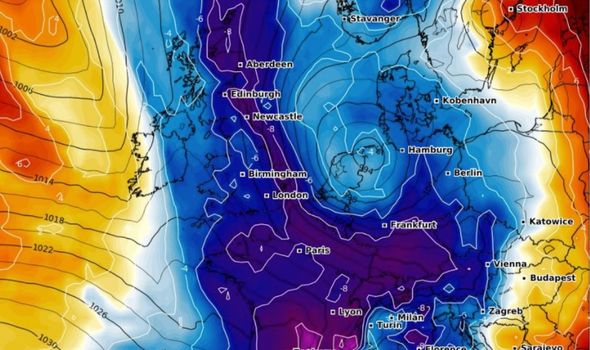 However, the band of rain will start to make a move southeast through the day.

Netweather forecasters say behind the rain: “Winds will turn round to a cooler northwesterly direction, with sunny spells and showers developing.

“Temperatures will be warmest in eastern and central England, with highs of 22 to 24c again, but they’ll be dipping away as the rain moves through with 9 to 12c about the peak for parts of Scotland and Ireland into the afternoon.”

Temperature maps from WXCharts and Netweather have turned blue this week as the cold weather sets in.

And as we head into the weekend, these maps turn purple, signifying a drastic dip in temperatures for this time of year.

Netweather maps show temperatures dipping to -2C widely across Scotland this weekend, with the mercury struggling to reach 10C elsewhere.

And there could be some unsettled and potentially stormy conditions on the horizon, with strengthening winds forecast from Wednesday.

And this could lead to the Met Office naming the first storm of the 2020/21 storm season. 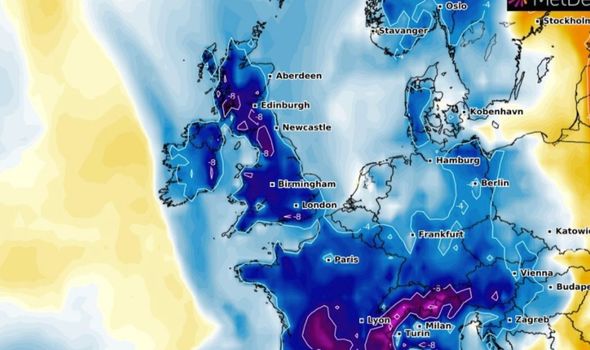 If this area of winds and heavy rain triggers enough warnings, Storm Aiden could be named this week.

A Met Office forecaster said: “Rain and strengthening winds with possible gales in the West are expected on Wednesday, with further rain and windy conditions through the rest of the week, when the North may see gales.

“Temperatures will be cool and frost may be seen in parts of the North.”

And elsewhere wintry weather will make an appearance, with the potential for snow across the highest mountains in Scotland.

This will be a rare occurrence, as snow does not usually fall in these areas in September.

“Snow is expected by the weekend on Scotland’s high ground and even possible on northern England’s highest Pennines, which is very rare in September.”