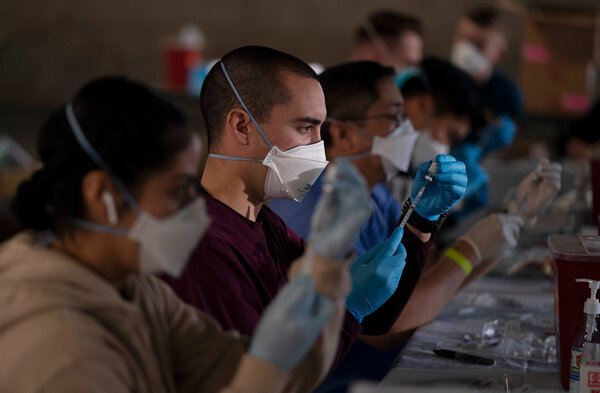 The United States hit a big milestone this week a year into the coronavirus pandemic: the average number of vaccine doses being administered across the country topped two million doses per day, according to data from the Centers for Disease Control and Prevention. A month ago, the average was about 1.3 million.

Mass vaccination sites across the country are opening up or increasing their capacity, in part to respond to the new influx of doses from Johnson & Johnson, which only needs one done and doesn’t require refrigeration systems in sub-Arctic temperatures, making it easier to store at non-medical facilities like stadiums and convention centers. Two sites in New York City — Yankee Stadium and the Javits Convention Center — will be stocked with the Johnson & Johnson vaccine and will be open around the clock.

But even as more people get vaccinated, it’s still not clear how easily vaccinated people may spread the virus. The answer to that question maybe coming soon but until then, scientists urge people to keep wearing their masks.

Here’s what else we learned this week:

A New York Times analysis found that the vaccination rate for Black Americans is half that of white people, and the gap for Latinos is even larger. Public health experts have said that obstacles to vaccine access deserve much of the blame for vaccination disparities.

A panel of experts in Canada recommended letting four months pass between doses for the three vaccines available there. The interval has been three to four weeks for the vaccines from Pfizer-BioNTech, Moderna and AstraZeneca. At least three provinces — British Columbia on the Pacific Coast and Labrador and Newfoundland on the Atlantic Coast — had already made plans to accelerate the vaccine rollout by extending the interval between doses.

Who Is Eligible for Vaccines in Each State

Every state has started widely vaccinating older adults, though with different minimum ages. All states have started expanding eligibility to other groups. See more »