BRASILIA (Reuters) – Calls for Brazil’s military to close Congress and the Supreme Court have screamed from banners at marches attended by President Jair Bolsonaro in recent weeks, but retired generals and close observers of the armed forces call it empty talk. A defender of Brazil’s 1964 military coup and the two decades of dictatorship that followed, Bolsonaro has allowed his sons and supporters to fan threats against democratic institutions in part because he has been backed into a corner, analysts say.

As the right-wing populist struggles with a sinking economy, the world’s worst coronavirus outbreak outside the United States, and police investigations targeting his family and friends, those anti-democratic outbursts seem likely to continue.

However, three retired generals told Reuters in recent days that there was no risk of a military intervention and expressed concern that the armed forces were being unduly politicized under Bolsonaro, a former army captain disciplined in 1986 for insubordination.

“The idea of ​​putting the armed forces in the middle of a dispute between branches of the state, authorities and political interests is completely out of place,” said Carlos dos Santos Cruz, a retired army general who served in the cabinet last year until he fell out with Bolsonaro’s sons.

“It is a lack of respect for the armed forces,” he told Reuters.

Bolsonaro himself has insisted he will defend Brazil’s constitution. But he has accused courts of abusing their authority and done nothing to stop his most fervent supporters from demanding the military intervene.

His son, Congressman Eduardo Bolsonaro, said in May that an institutional “rupture” was a matter of time.

The remarks followed a decision by the Supreme Court to investigate a suspected misinformation and intimidation network run by the president’s backers on social media that played a large role in his 2018 election. The inquiry could lead an electoral court to question his victory and potentially annul the result.

The threats of democratic rupture are aimed at intimidating rivals, prosecutors, and the Supreme Court, according to political scientist Christian Lynch. But military commanders have publicly dismissed any likelihood of a coup.

“The Supreme Court called Bolsonaro’s bluff,” said Lynch, a professor at Rio de Janeiro State University Social and Political Studies Institute. “He didn’t have the coup card. He was bluffing all along.”

For retired General Roberto Peternelli, who was elected to Congress in 2018 for the same party that nominated Bolsonaro, the military would simply not obey a presidential order to shut down Congress or the Supreme Court.

“The armed forces totally respect the constitution and such an order would be unconstitutional and illegal,” said the ex-paratrooper, who commanded the Brazilian army’s helicopter fleet, in a telephone interview.

Retired General Paulo Chagas, a former infantry officer, said the president did not have the power to close Congress or the top court and would lose legitimacy if he attempted it.

Some critics say Bolsonaro is already politicizing the military, which worked for decades to establish itself as an apolitical defender of democracy after the human rights abuses of the 1964-1985 dictatorship.

With military brass in a third of Bolsonaro’s cabinet posts, including two active duty generals among his closest advisors and retired General Hamilton Mourao as his vice president, the reputation of the armed forces is tied up with the government.

According to a Federal Audit Court investigation, there are now as many as 3,000 military personnel in government jobs. 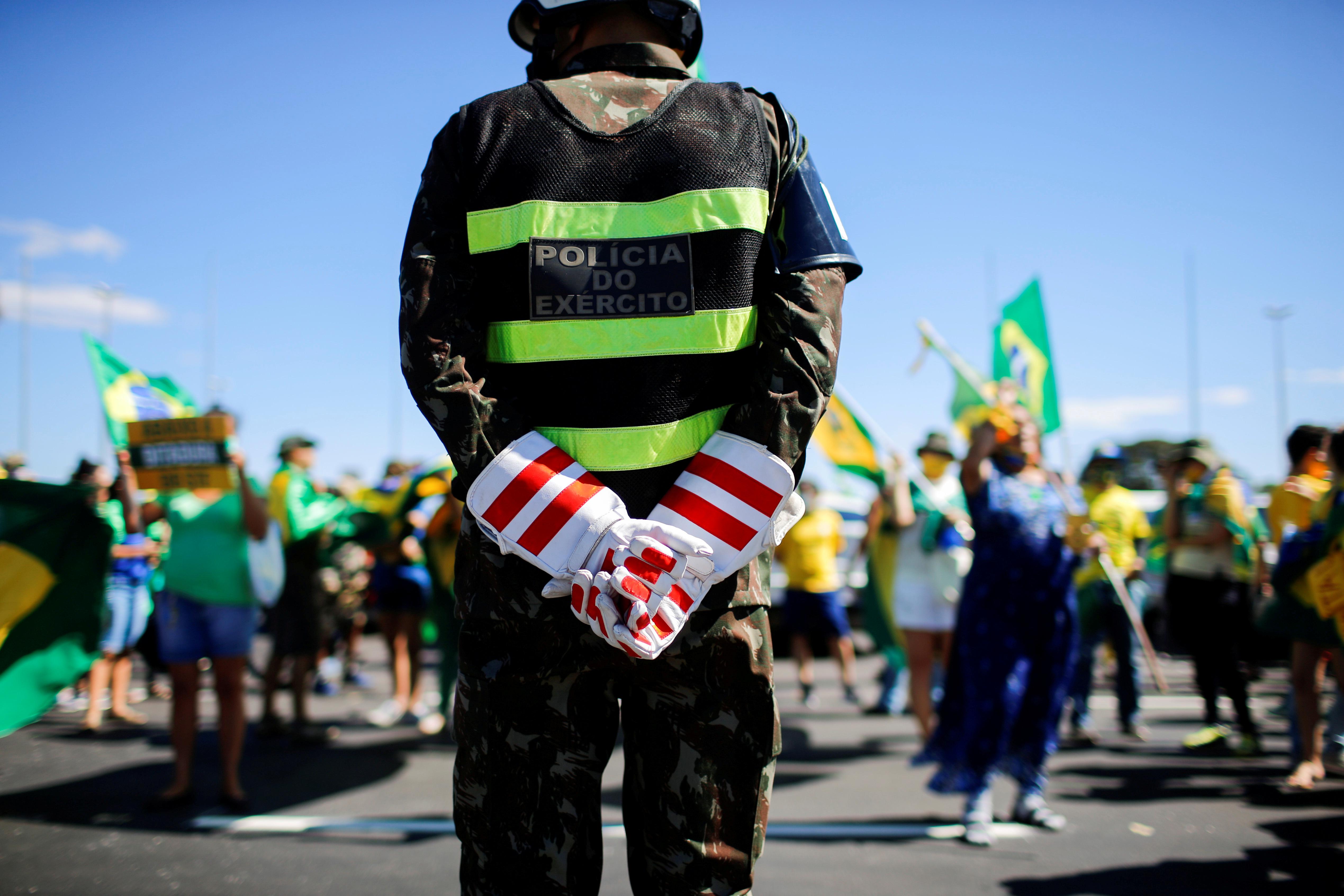 Chagas, who campaigned for Bolsonaro’s election, said he still believes the president is the best man to lead the country, but he suggested active duty officers should refuse or retire from government jobs in order to keep a distance between the military and political spheres.

Paulo Kramer, a University of Brasilia professor who knows many of Bolsonaro’s cabinet well, said the generals who are in the cabinet, such as top security advisor Augusto Heleno, remember vividly how the legacy of the 1964 coup stained the reputation of the armed forces.

“This generation of General Mourao and Heleno are vaccinated against any coup attempts. They feel uneasy when the president and his sons make those threats,” Kramer said.