Islamabad, Pakistan – Thousands gathered in the central Pakistani city of Gujranwala to protest the government of Prime Minister Imran Khan, as an opposition alliance kicked off a campaign it hopes will be able to take advantage of rising prices and other frustrations to overthrow the government.

Important leaders from each of those main opposition parties were expected to address the gathering later on Friday, including PML-N chief Nawaz Sharif, PPP chairman Bilawal Bhutto Zardari, and JUI-F chief Fazl-ur-Rehman.

Sharif is expected to speak live via video link from London, capital of the United Kingdom, where he has resided since leaving Pakistan on medical bail as he continues to appeal corruption convictions issued by an Islamabad court.

Maryam Nawaz, his daughter, is also expected to address the gathering of thousands, who made their way to Gujranwala from across Punjab province, home to more than half of Pakistan’s 207 million people, and other regions.

The government has dismissed the protests as a sideshow, with Information Minister Shibli Faraz challenging the opposition to fill the stadium where it is to be held.

“The way they have systematically destroyed institutions and placed people in positions to serve them, this is why the economy has been destroyed,” Faraz said earlier on Friday, addressing the country’s Senate.

“This country has seen itself become poorer and the institutions become weaker as they got richer.”

The PDM alliance’s campaign, launched after its formation on September 20, has been marked by how it has taken blunt aim at the country’s military, which has directly ruled the country for roughly half of its 73-year history and is accused of poll rigging to bring Prime Minister Khan to power.

On Friday, that same candidness – rare in Pakistani political discourse – was on show ahead of the rally.

“We want to be successful in this effort non-violently and democratically,” said PPP chief Bilawal Bhutto Zardari. “And I am sure that Imran Khan’s ‘facilitators’ will realise that the way that society is suffering right now, Imran Khan is not worth it.” 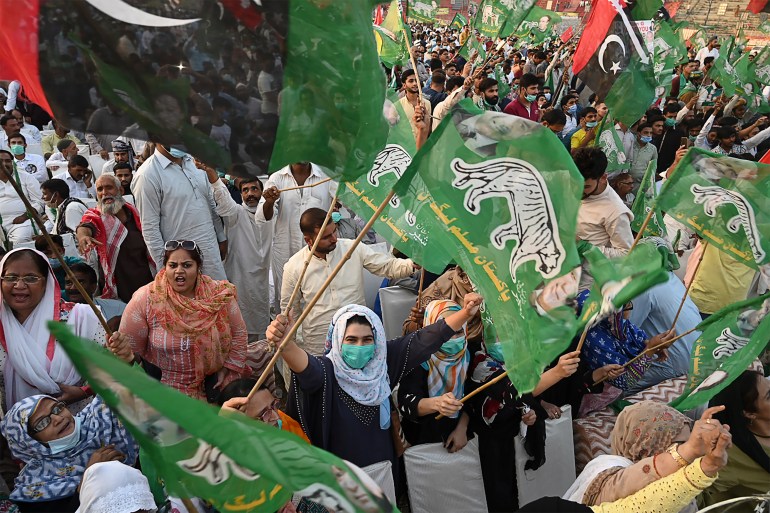 Khan’s Pakistan Tehreek-e-Insaf was elected to power after a general election in July 2018 where the opposition alleged there had been widespread rigging during the vote-counting process, as an online results system broke down on election night.

They have also alleged an anti-corruption campaign by the country’s independent National Accountability Bureau inordinately targeted PML-N and PPP candidates ahead of the polls.

Sharif was removed as prime minister in 2017 after the Supreme Court ruled he had lied on a wealth declaration, and the former premier was convicted and sentenced to 10 years in prison on corruption charges days ahead of the July 2018 election.

Following his election, Khan has made that anti-corruption campaign a centrepiece of his rule, with large numbers of opposition politicians either jailed, facing trial or under investigation for corruption.

Several of those arrested have since been released on bail, although authorities arrested Sharif’s younger brother Shehbaz, a key leader of the PML-N, on corruption charges days after the PDM was formed. He remains in custody.

Critics, including rights groups and the opposition, say the anti-corruption drive has been one-sided, mainly targeting Khan’s political opponents while leaving members of his governing party or their allies largely untouched.

“The [anti-corruption watchdog] seems reluctant in proceeding against people on one side of the political divide … while those on the other side are being arrested and incarcerated for months and years without providing any sufficient cause,” read a Supreme Court verdict in a corruption case in July.

Khan has dismissed this criticism, arguing on Friday the opposition is only holding protests to attempt to secure concessions in the corruption proceedings against them.

The PTI’s rule has also been marked by narrowing media freedoms, with coverage of opposition figures or criticism of the military heavily restricted.

Following the speech by Sharif at the PDM’s formation event on September 20, Khan’s government issued orders that news media channels were no longer permitted to carry statements by him or any other political leaders who are currently wanted on corruption charges.

Khan’s government remains largely popular, buoyed by its handling of the coronavirus pandemic, which has seen Pakistan register a relatively low death toll, with 6,718 dead and 321,877 cases since the outbreak began.

In recent weeks, however, it has faced a fresh challenge, with rising inflation across the country, particularly for food staples such as flour, pulses and vegetables.

In October, Pakistan’s Bureau of Statistics clocked year-on-year consumer inflation at 9.04 percent, with prices of essentials such as potatoes and tomatoes rising by more than 50 percent.