You don’t need a trust fund to eat well in the city. Pete Wells picks his favorite spots for a frugal feast.

S & P Lunch took over a Depression-era sandwich shop in the Flatiron district.Credit…Lanna Apisukh for The New York Times

I loved a lot of restaurants in 2022. Here are some where a normal person can eat an astoundingly good meal for about $10. An abnormal person, by which I mean anyone who orders the way I do, might spent twice as much. It will be worth it.

As you wander through Chinatown’s first Flushing-style food court, your eye may be caught by the signs hawking Sanmiwago’s Taiwanese noodle soups and fried chicken. Maintain focus, because dumplings are the goal. The choices are fairly standard — chicken with cabbage; pork with kimchi, corn or chives; steamed or pan-fried. Once you’ve made your choice, you’re handed a beeper. Then you wait. And wait. Each batch is rolled at the last minute, and just when you are thinking you should just walk out to find something else to eat the beeper flashes, and you are handed what may well be the freshest-tasting dumplings in Chinatown. The pan-fried ones are especially good, with tissue-thin wrappers that are both tender and crisp at the same time. 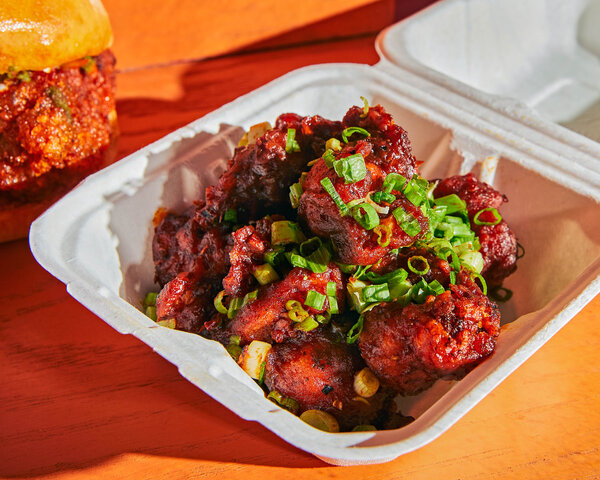 The chef Chintan Pandya has opened so many restaurants in such a short time that it’s hard to keep up; he’s in danger of becoming the Joyce Carol Oates of Indian food. Some time between the arrival of Semma and the birth of Masalawala & Sons, while the rest of us were napping, he whipped up this tiny, speedy East Village kitchen. The ostensible star is fried chicken and it is very good, tangy and tender, with a firm shell that holds up whether you order it by the piece or pressed into a sandwich. But the vegetables are no afterthoughts. The fried mashed potato sandwich called vada pao looks small and harmless but has been drenched in thecha, a condiment of coconut and garlic mashed with dried chiles. Underestimating it would be a mistake.

With her first brick-and-mortar location, Evelia Coyotzi finally gets to stretch out a bit after selling tamales on the sidewalks of Queens for two decades. All the standard tamales are here, of course — pork in a guajillo adobo, chicken in salsa verde or mole poblano — along with Oaxacan-style tamales, shaped more like muffins than cigars and stuffed with things like fried pork skin in tomatillo salsa. For the first time, though, you can get quesadillas and picaditos, both made with very good masa. Sweet, colorfully dyed fruit tamales are available for breakfast, along with steaming cups of atole. The doors open at 5 a.m., which is worth keeping in mind the next time you have an early flight at La Guardia, about 10 minutes away by car.

Myo Lin Thway began Burmese Bites as a stall in the Queens Night Market selling two items. Later it operated from a cart parked in downtown Long Island City. Now it does business in the food court at the foot of the escalators in the Queens Center mall, next to the Panda Express outlet. The menu has grown since the early days. There is, of course, tea leaf salad, topped with so many peanuts, rice snacks and other crunchy bits that you could serve it as bar snack; the tangy and savory rice-noodle salad nan gyi kaukswe thoke; and ohno kaukswe, noodles in a creamy, fragrant chicken-curry soup thickened with coconut milk. But the main event — not just of Burmese Bites but of the food court itself and perhaps the entire mall — is still palata, the flaky flatbread that Mr. Thway makes by twirling and tossing and thwacking and stretching a lump of dough until it is so thin that when he holds it up in front of his face you can see him on the other side. Then he folds it into a neat envelope and cooks it on the griddle. The most popular version is keema palata, stuffed with fragrantly spiced minced chicken. The menu helpfully describes this as a “Burmese quesadilla.”

True, this venerable pre-Depression lunch counter was cheaper when it was still called Eisenberg’s and you could get tuna salad smeared over egg salad on rye for $8. Now the sandwich costs $13, but the rye is better. So is almost everything else. The old emblems of Jewish New York are here: sweet, pinkish chopped liver with packets of saltines; pepper-crusted pastrami, steamed overnight and sliced thick, but not too thick. The new owners also brought on some innovations like a double-decker with turkey, corned beef and Swiss on rye. S & P calls it the Jersey Joe in reference to its origins across the Hudson River, where it is known as a sloppy Joe.