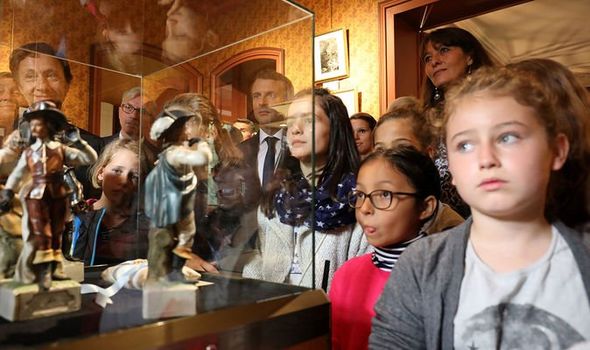 France reported a big drop in its coronavirus death count on Sunday, with 242 deaths in 24 hours, a fall of more than a third on the previous day. Staff at both French “collèges” and “lycées” – dealing with children aged 11 to 18 – should wear masks, President Emmanuel Macron’s coronavirus task force added, though it admitted making masks mandatory for the youngest of school children, aged from 4 to 11, would be “impossible”.

The council added school staff should do their utmost to ensure that children in one class do not “cross paths” with pupils from another year group, and called for all children to have lunch at their own desks “if possible”.

Parents should take their child’s temperature before sending him or her off to school, the pandemic task force added.

France has ramped up the domestic production of masks to ease an acute shortage that has prompted nationwide anger and disbelief.

Critics argue that the government’s early claim that masks were not useful was, in fact, prompted by a shortage of them.

French Education Minister Jean-Michel Blanquer said on his Twitter account later on Saturday that the scientific council’s findings would be included in the government’s considerations on how to reopen the country’s schools next month.

France has been on full lockdown since March 17 in a bid to contain the spread of the coronavirus, and the centrist government is hoping to gradually lift the restrictions on movement and restart economic activity from May 11 onwards.

The stringent restrictions on public life allow people to leave their homes only to buy food, travel to work, exercise alone or seek medical care.

M Macron is aiming to loosen the confinement then with schools reopening first, although his government is yet to say how it might work in practice.

Prime Minister Edouard Philippe is due to present the government’s lockdown exit strategy to parliament on Tuesday, and lawmakers will then vote on the measures.

The government is also debating whether or not to proceed with a controversial software and smartphone application aimed at being able to trace the coronavirus, with some expressing concerns over the potential for data abuse and privacy violations.

The decision to ease confinement measures comes amid a slow but steady drop in coronavirus-related deaths.

France reported a big drop in its death toll on Sunday, with 242 deaths in 24 hours, a drop of more than a third on Saturday’s count.

The number of hospital deaths – 152 – was the lowest daily toll in five weeks, health officials said, adding that 90 people had died in nursing or care homes. The country’s total death count currently stands at 22,856 – the fourth-highest tally in the world.

While the number of deaths from the flu-like infection has risen, the rate at which fatalities have increased has steadily fallen over the last two weeks. The number of critically ill patients being treated in intensive care units dropped for the 18th day in a row.