The video footage released by Ukraine’s military forces showed their army aim and attack an abandoned Russian tank. The Ukrainian army hit the Russian tank, which contained ammunition so hard that it engulfed the tank with a large fireball. All the Ukrainian army left of the tank was a pile of burning metal on the scorched earth. The invasion of Ukraine has been raging for over four months, and Ukraine’s armed forces have been continuing to push back on Russian advancement with the help of NATO-gifted weapons.

The video footage shows the Russian T-80 MBT tank stationed out in an open field in Dibrovne, Kharkiv, surrounded by big black potholes in the earth from previous heavy artillery strikes.

The Ukrainian army then strikes the Russian military tank, which causes an instant red hot fireball to engulf the tank.

The ammunition aboard the tank caused such an intense blast, a mushroom-shaped smoke dome formed over the ruins.

And smoke continued to rise out of the top of the tank as the remains of the vehicle look unrecognisable.

Toward the end of the video, the tank appears to of disappeared, all that is left is a burning pile of mental dented into the scorched earth. 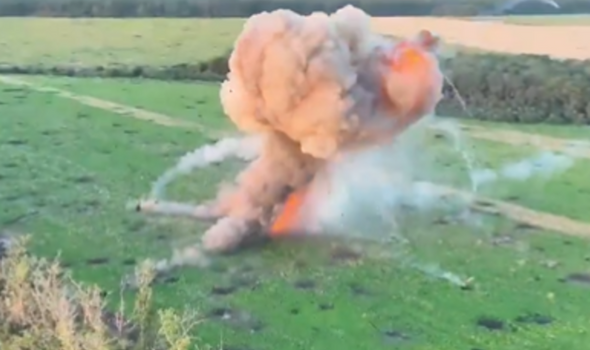 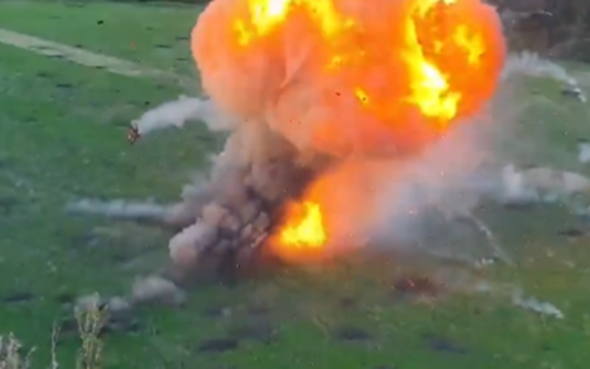 Users on social media have been reacting to the explosive footage.

One Twitter user @Peter_Fox59 said: “I read one Russian report saying their tanks don’t carry more than 10 artillery rounds to prevent this happening. Apparently, not everyone got the memo.”

@AproposBash said: “They’re going to be picking up hunks of metal while farming those fields for generations to come.”

@IsalibaCurtis said: “Am I just sick or does anyone else zoom in on the blazing wreck looking for fried orc components? I’m always keen to know if the vehicle was occupied or abandoned. My logic: Why is a T-80 in the middle of an open field when there’s a hedgerow running around the edge?”

@Hauda01 said: “Wow like, I didn’t know that a tank turret could fly that high up in the air.”

@AussieBob91 said: “An Olympic event where Russians aren’t banned for state-sponsored doping but are instead encouraged to load up their tanks.”

@Big_Blyatowski said: “I have to say the quality of the video coming out of the war is improved 1000%. Sweet HD aerial shots!” 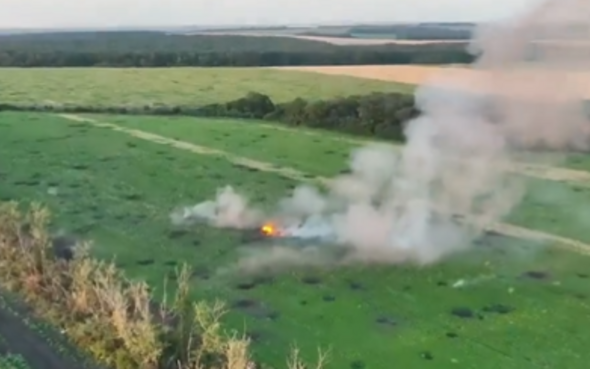 Britain and other NATO-aligned countries have been continuing to send top-of-the-range weapons to Ukraine since the beginning of the invasion.

Military experts have been encouraging Western countries to continue to send more heavy artillery, one even advised Ukraine to start producing their own nuclear weapons.

Dr Paul Maddrell, a war expert from Loughborough University, said: “If I were the president of Ukraine, I’d strongly be considering developing nuclear weapons. Ukraine had nuclear weapons in the 1990s when the Soviet Union collapsed.

“There were nuclear weapons on Ukrainian territory, which became Ukraine’s and Ukraine agreed to give them up to denuclearise Europe and make it a safer place.

“Well, if it had kept those nuclear weapons, Putin would not have invaded because he would have faced a nuclear attack on his country.

“Zelensky, if he’s prevented from joining NATO, may well think that the only way forward is to develop nuclear weapons – as he may do.”