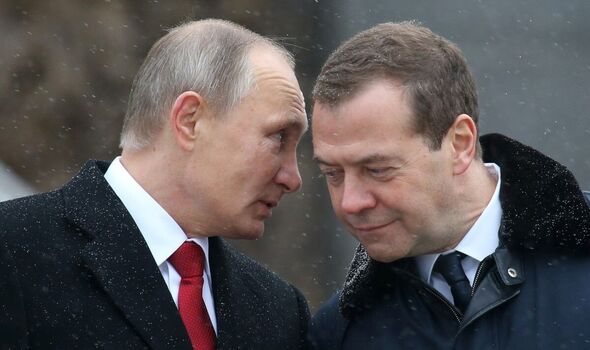 The military-political leadership of Ukraine and the armed forces of its allies will now be considered “legitimate military targets”, Security Council Deputy Head Dmitry Medvedev wrote on the Telegram. According to him, during the conflict with Ukraine, issues of legal military purposes are interpreted differently. At the same time, there are “rules of conduct in times of war (jus in bello), which originate in sacred sources.”

Medevedev has listed the criteria of another nation’s army which he believes would classify them as legitimate targets.

They would also be: “Any military and auxiliary equipment of the enemy” and “any objects related to military infrastructure, as well as civilian infrastructure that contributes to the achievement of military goals.”

Vladimir Putin has said the ultimate goal of the war on Ukraine will be the liberation of the Donbass and the “creation of conditions that guarantee the security of Russia.”

It comes after Russia launched another series of strikes on Ukraine today.

Authorities reported explosions on social media in the capital Kyiv, southern Kryvyi Rih and northeastern Kharkiv as air raid sirens were sounded across the country warning of a new devastating barrage of Russian strikes on critical energy facilities and infrastructure.

Odesa, located in the Black Sea, was also targeted, including the cities of Vinnytsia, Poltava, and the northern Sumy region.

There was no immediate word of casualties, as air defence systems went into operation across Ukraine.

It was also unclear what infrastructure had been hit.

“The enemy is massively attacking,” Oleksii Kuleba, head of Kyiv’s regional military administration, said in a post on Telegram.

Strikes targeting energy infrastructure have been a key part of Moscow’s new strategy to freeze Ukrainians into submission.

Later in the day, it was revealed 40 Russian missiles were fired on the Kyiv region this morning, according to the Ukrainian capital’s military spokesperson, Mykhailo Shamanov.

Ukrainian air defences shot down 37 of 40 incoming missiles in the Kyiv area in what was one of Russia’s latest attacks since the start of the war in February, Shamanov said on television.