Russia: Fight breaks out where soldiers are located in Penza

A Russian lieutenant colonel has had his face “smashed” and bones broken by conscripts after telling them they were “cannon fodder”. In footage released online, the top officer can be seen being punched in the head before several others attack him, before he manages to flee. The incident occured at the Rubin Palace of Sports in the Russian town of Penza, 600 kilometres southeast of Moscow, where men have been stationed in a makeshift barracks before being sent to the frontline in Ukraine.

The brother of a draftee said of the ordeal: “My brother messaged me just now. There was a Lt Colonel walking among [the newly-mobilised], telling them: ‘You are all cannon fodder, you are facing slaughter’.

“There was a fight, the colonel’s face was smashed. They could hardly pull them apart. One person fell sick [after the cannon cannon fodder threat].

“Two ambulances rushed there in one hour. Many people felt sick, many were in tears. One tried to escape, they caught him. It’s a f***ing nightmare what’s happening there .

“There were 1,080 people there now, in Rubin [sports palace]. They’ll end up in knife fights, it’s a complete mess there. All of them are drunk. Every single one of them.” 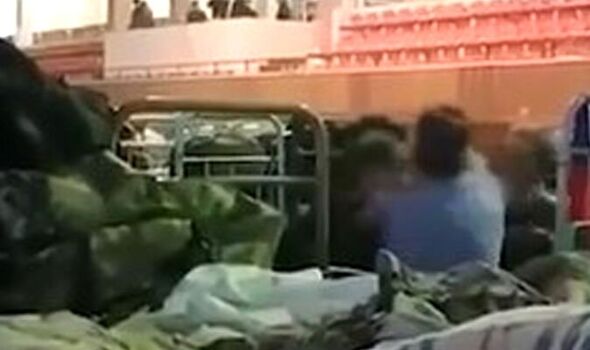 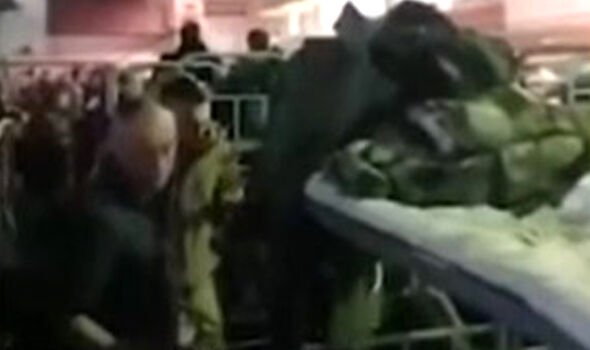 It is unclear if the video showing a punch-up was the one referred to by the brother of the draftee or just another brawl between officers and reservists.

The reports are just the latest of many stories of fighting and drunkenness among newly mobilised conscripts.

Discontent among the Russian population over mass mobilisation has been rife over accusations that the reservists are not being properly equipped before being sent to Ukraine.

Russian officers – often themselves conscripted – have been advising new recruits to bring their own sleeping bags, tourniquets, medicines and roll mats. 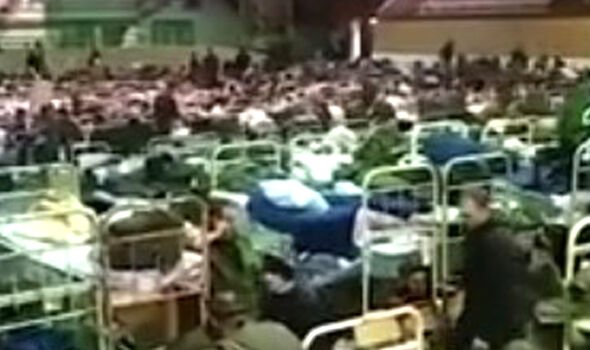 Another video posted online showed a newly-recruited tank commander complaining that he was told he will receive “no training whatsoever” before being sent to Kherson, a recently annexed area of Ukraine to fight.

The commander said: “The officials have told us that there will be no training prior to us being sent to the conflict zone.

“Our commander officially confirmed that we’ll be sent to Kherson on the 29th September. Make your own decisions about what to do with that moving forward…

“There’s been no training whatsoever – no shooting, no theoretical training… nothing. F***.” 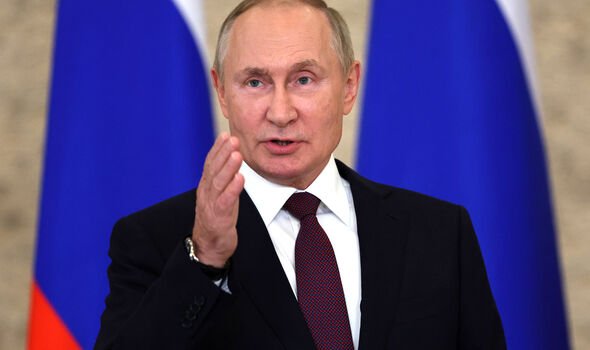 Meanwhile, as European countries including Finland and Georgia begin to turn away Russians fleeing conscription, Uzbekistan has said it has no plans to deport Russians, the Tashkent government said on Friday.

Hundreds of thousands of men, some with families, have left Russia since President Vladimir Putin ordered a partial mobilisation last week; many headed to Uzbekistan, Kazakhstan and other Central Asian former Soviet republics.

Uzbekistan’s foreign ministry said in a statement it remained committed to principles such as respecting other states’ sovereignty and territorial integrity and supported a peaceful settlement of the Ukrainian conflict.

“…Foreign citizens who have not broken the law are not subject to forced deportation,” it said.

Uzbekistan has not said how many Russians have arrived in the country since the mobilisation announcement, but neighbouring Kazakhstan has said it saw about 100,000 arrivals.