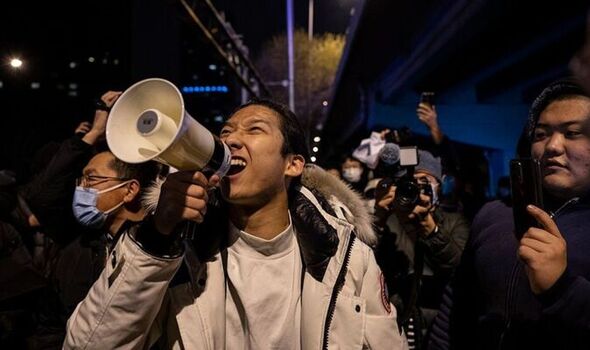 President Xi Jinping of China attempted to erase evidence of the largest demonstrations against China’s government since the 1989 Tiananmen Square protests yesterday. However, the leader showed no signs of changing his tune on the zero-Covid policy which prompted the unrest.

Student demonstrators flooded the grounds of two universities in Beijing over the weekend.

It came as crowds chanted anti-Communist party slogans and openly demanded the removal of president Jinping.

Tsinghua University cancelled classes for students yesterday as well as giving free bus rides to students to return them to their hometowns.

Publicly, it stated that health reasons were why students were being sent home, but many suspected it was trying to end the autumn term early to prevent further mass protests.

On Sunday, students held up blank pieces of paper to protest against the lack of free speech.

The mute gesture of defiance quickly spread among protestors elsewhere in the country.

The White House spoke of its solidarity with protestors in China, adding that the zero-covid policy is incredibly irrational.

“We think it’s going to be very difficult for the People’s Republic of China to be able to contain this virus through their zero-Covid strategy,” a National Security Council spokesman said.

Other world leaders, including Prime Minister Rishi Sunak, urged Beijing to “respect” protests against its pandemic policies, which continue to keep tens of millions of people subject to lockdowns and mass testing, with restrictions on travel.

The authorities in China responded to the widespread and large demonstrations by increasing online censorship while imposing tighter security measures.

Barriers were erected around Wulumuqi Road in Shanghai, which was the scene of a vigil on Saturday.

The scene erupted into clasehs between police and protestors who believed Covid restrictions contributed to a fire in an apartment block in Urumqi, Xianjing.

People visiting the street, which is named after Urumqi, were arrested or pulled aside by officers yesterday and told to delete any video or images they had taken.

“As a Shanghai citizen, I have the freedom to record this,” said one man, who was questioned but released after filming near the street.

“This is Shanghai now. There’s no freedom,” he added.

Censors were quick to remove all photos and videos of demonstrations from social media sites.

The protests began on Saturday in Shanghai and Beijing but by Sunday had spread to other cities, including Nanjing in the eastern province of Jiangsu, and Chengdu in Sichuan, more than 1,000 miles to the west.

Residents of Wuhan, in central Hubei also rebelled against the lockdown measures.

News of the protests spread within China on forums like WeChat, but by yesterday all videos of the uprising quickly disappeared from the web.

They were replaced by messages saying the content was “non-compliant” and “sensitive”.