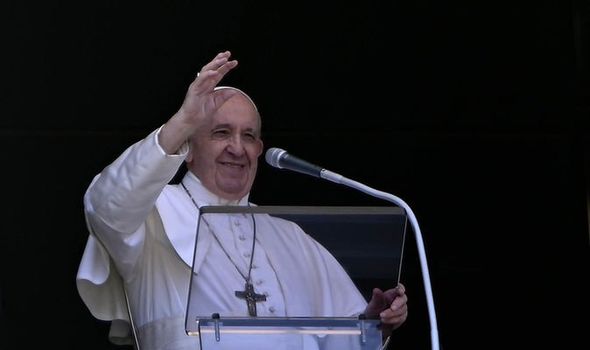 The film, directed by Russian-born Evgeny Afineevsky, also shows him encouraging two gay men to raise their children in a parish church. The film explores the issues Pope Francis cares about most, including environment, poverty, migration, racial and income inequality.

Pope Francis told the documentary: “Homosexual people have the right to be in a family. They are children of God and have a right to a family. Nobody should be thrown out or made miserable over it. What we have to have is a civil union law. That way they are legally covered.”

While serving as archbishop of Buenos Aires, Francis endorsed civil unions for gay couples as an alternative to same-sex marriages.

However, he had never come out publicly in favour of civil unions as pope until now.

The premiere comes after the pontiff praised a breastfeeding mother as he reverted to going without a coronavirus face mask during the Vatican general audience.

Francis mentioned Valentina Frey, from Switzerland, at the start of the audience in the Paul VI hall while she breastfed her daughter Charlotte Katharina.

He said the act was an example of “tenderness” and “beauty” before continuing his speech. The Holy Father said: “Something caught my attention while the readers were reciting the Biblical passages. There was the baby over there that was crying.

“I was looking at the mother who was nursing the baby and comforting her. God is like this with us. He often tries to comfort us and nurse us. It is a beautiful image. Never silence a baby in church because that is the voice that draws God’s tenderness.”

Pope Francis’s words of support for same-sex civil unions will bring encouragement to families around the globe who have longed for wider acceptance.

He has not altered the official doctrine of the Catholic Church and experts have noted that while Archbishop of Buenos Aires he opposed same-sex marriage but supported legal protection for gay couples.

Yet the significance of his endorsement of civil unions should not be underestimated in a world where homosexuality remains illegal in many states and in which anti-gay violence and discrimination is rife.

His words ignite hope that we are edging towards a reality in which we will not just tolerate but love our neighbours.