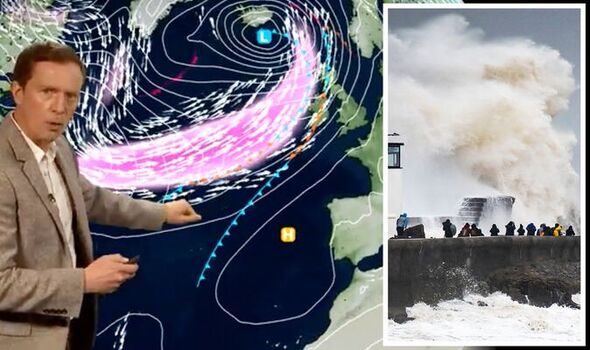 Scotland, Wales and northern UK face ‘peril’ over the next 36 hours from than three inches of rain ‘cascading over mountains’. Brutal 80mph gusts will hammer exposed regions sparking warnings for ‘flying objects’ and structural damage.

Government forecasters are ‘concerned’ about an area of strengthening low pressure being whipped towards the UK by a supercharged jet stream.

The Met Office has issued severe weather warnings for rain across western Scotland on Tuesday and wind across much of northern Britain mid-week.

Weather experts warn the Atlantic is ‘firing up’ this week to hurl violent weather fronts at the UK.

Jim Dale, meteorologist for British Weather Services, said: “The rain will be largely across western Scotland through Tuesday and into Wednesday, and here we could see 80mm [3ins] within around 18 hours.

“Some of these downpours will be very heavy and mark the second major rain event of the season, following on from recent floods in Cumbria.

“The problem will be the volume of rain in a small time, and how it cascades over the mountains.

“There is every chance of regional flooding from this, and people should be aware, this would be classed as a moderate peril.” 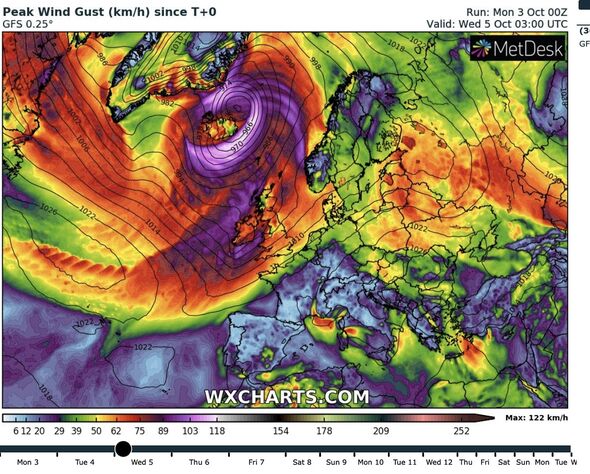 A second low-pressure system approaching the UK around mid-week will dish up a blast of strong winds, he added.

He said: “We could see gusts of up to 70mph in exposed regions and this brings the danger of flying things and structural damage.
“The other problem is the trees still in full leaf, and with these sorts of winds, that can present a danger.

“There is no doubt, as we said earlier, that the Atlantic is starting to fire up.

“The very unsettled weather will be mainly northern Britain while southern regions will remain relatively calm.” 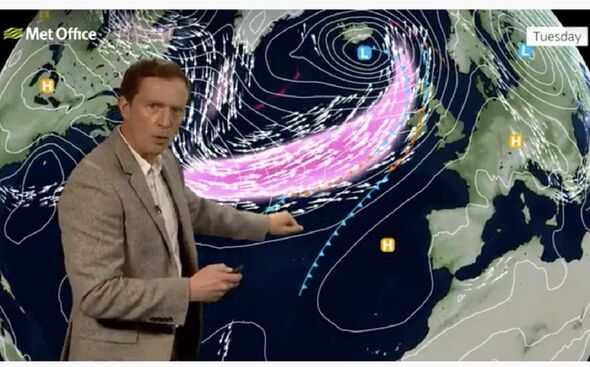 Temperatures will rise to 20C across southern Britain on Wednesday as warm air wafts in from the south.

But the mild weather will not last long with the possibility ever looming of unsettled weather across the country, added Mr Dale, author of Weather Or Not?

The Met Office has issued a severe weather warning for rain across Scotland where flooding is likely through today.

A separate wind warning will come into force on Wednesday across Scotland, northern England, Northern Ireland and Wales. 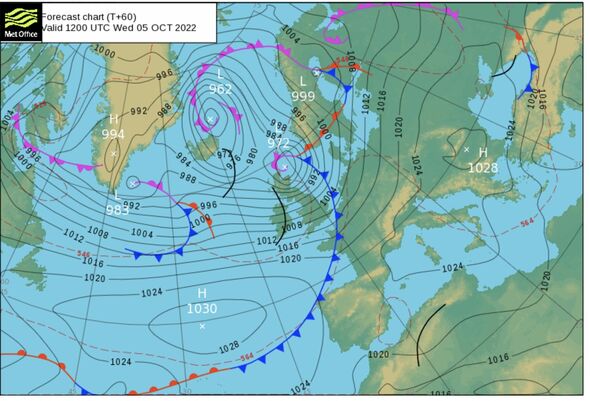 Met Office meteorologist Alex Deakin said: “It is a blusterous and boisterous start to October with some very gusty winds likely especially on Wednesday.

“Weather fronts are gathering to the northwest, and they will bring more cloud and rain as they push southwards on Tuesday.”

A ‘lively’ jet stream will pick up a ‘ripple’ of low pressure that will tear across the UK over the next 24 hours, he warned.

He said: “The jet stream is pretty lively, and this will pick up this ripple and spin it up into an area of low pressure that is likely to whiz across the UK on Tuesday and Wednesday.

“It is definitely one that we need to keep a very close eye on.

“That area is intensifying as it approaches the UK, and we are a little concerned about the intensity of this low and the wind that it brings.”