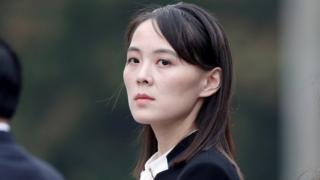 North Korea’s army has warned it is ready to enter the demilitarised zone dividing the two Koreas.

The threat is partly in response to defector groups in the South sending propaganda material north.

Over the weekend, Kim Yo-jong, the sister of North Korean leader Kim Jong-un, said she’d ordered the army to prepare for the step.

And the military now says it is ready to “turn the front line into a fortress and heighten military vigilance”.

Tensions between the two countries have been rising for some time over the cross-border leaflets, usually sent via balloons.

South Korea’s defence ministry on Tuesday responded to the renewed threats by saying it was working with the US to closely monitor military moves in the North.

What did the North say?

North and South Korea are separated by the so-called demilitarised zone (DMZ) – a buffer along the border that has separated the two countries since the Korean War in the 1950s.

On Tuesday, the North Korean military said it was “studying an action plan” for the army to move “into the zones that had been demilitarised”.

The General Staff said it was on “high alert” and ready to “rapidly and thoroughly” implement any decisions by the government.

The statement comes after the sister of North Korean leader Kim Jong-un threatened military action against the South on Saturday.

“I feel it is high time to surely break with the South Korean authorities,” said Kim Yo-jong, who holds a senior role in the North’s political hierarchy.

She promised to take “action”, said she had instructed the military, and ended her statement with: “Rubbish must be thrown into the dustbin.”

Why is North Korea doing this?

Intelligence has been stepped up along the DMZ and President Moon has appealed for calm – urging Pyongyang to avoid escalating tensions.

But just how did it get to this point over leaflets?

First, North Korea has a point about the anti-regime propaganda. The South Koreans did promise to prevent the leaflets being flown over the border as part of the inter-Korean agreement between President Moon and Kim Jong Un in 2018.

Secondly, Pyongyang is angry at Seoul for not challenging the United States’ insistence that strict sanctions should remain in place.

So it is likely this is about something bigger. The timing of the releases, and the careful escalation from cutting communications to threats of military action, look orchestrated.

North Korea could be building to a crisis to punish the South and perhaps use the tension as leverage in future talks.

As for the threats themselves, they aim to row back the hard won gains by President Moon in 2018.

A total of 20 guard towers were demolished – with the eventual hope of turning the most heavily-fortified border in the world into a peace zone.

President Moon said he was looking to establish “irreversible peace” on the peninsula. The North Koreans could be about to prove him wrong.

What is the leaflet row?

Last week, Pyongyang cut all communications with the South, including a hotline between the two nations’ leaders.

It said it was angered by North Korean defectors based in the South sending leaflets across the border.

Defector-led groups often send balloons over the border, carrying leaflets and other items, including food, $1 bills, radios and USB sticks with South Korean dramas and news.

The South Korean government has already tried to stop the groups, arguing their actions put residents near the border at risk.

President Moon Jae-in on Monday directly appealed to the North to return to dialogue and not escalate the situation further.

What is the demilitarised zone?

The demilitarised zone (DMZ) was set up after the Korean War in 1953 in order to create a buffer zone between the two countries.

Over the decades it has been the site of occasional gunfire, escapes by North Korean soldiers, and peace talks to ease tensions. From the South, it’s even a tourist destination.

During the relative rapprochement between North Korea and the US, the DMZ was also the site of direct handshakes between Kim Jong-un and both Donald Trump and Moon Jae-in.

For the past two years, the South Korean government in Seoul has tried to turn the heavily-fortified border into a peace zone.

Easing military tensions at the border was agreed between the leaders of the two countries at a summit in Pyongyang in September 2018.

So far though, despite its name, the zone remains one of the most heavily militarised areas in the world.