The military detained Myanmar’s leader Aung San Suu Kyi and other democratically elected leaders after staging a coup on Monday. The move saw thousands of people rally to show their anger at the outsing of the nation’s parliament. In the nation’s largest city, Yangon, crowds chanted “military dictator, fail, fail, democracy, win, win”.

Now there exists a near-total internet blackout in Myanmar.

The NetBlock’s organisation tweeted: “Myanmar is now in the midst of a second nation-scale internet blackout as of 10am. 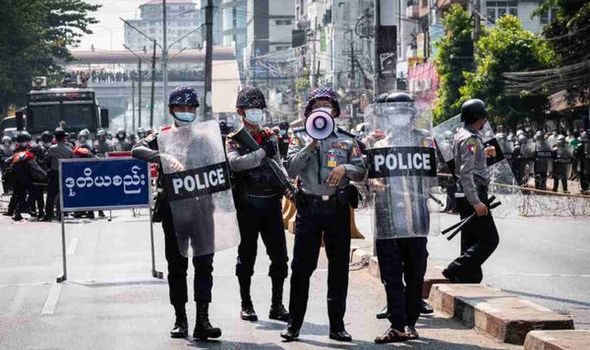 Two hours after the original tweet Netblocks then updated by tweeting: “A near-total internet shutdown is now in effect in Myanmar.

“Network data show a collapse of connectivity to 16 percent of ordinary levels from 2 pm local time.

“The information blackout is likely to severely limit coverage of anti-coup protests.”

According to Norwegian telecom operator Telenor, the military rulers imposed a block on Twitter and Instagram in the country until further notice.

This comes after the nation’s internet providers were also told to block Facebook on Friday.

The ministry of communications and information technology, now under military control, said it had blocked Facebook for the sake of “stability”.

Speaking to the BBC one female protester in Yangon said she would not accept the “unjust seizing of power”.

She said: “Because of military dictatorship, many of our lives have been destroyed.

“We cannot allow our future generations to meet the same fate.”

Speaking from Yangon, Britain’s ambassador to Myanmar, Dan Chugg, told the BBC: “The grief and the sadness of the last few days is gradually turning to anger.

“There’s quite a sense around the country of unhappiness at what’s happened, and outrage.”

Some suggest the military coup is motivated by a power struggle within the nation’s military.

Speaking to Associated Press Kim Jolliffe, a researcher on Myanmar civilian and military relations, said: “There are internal military politics around that, which is very opaque.

“This might be reflecting those dynamics and might be somewhat of a coup internally and his way of maintaining power within the military.”