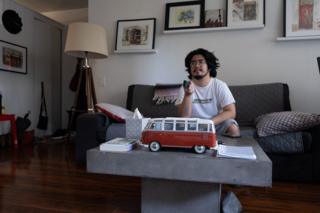 Coronavirus lockdown has given one young man plenty of time to think about how he wants to change the world.

My name is Miguel Carrion, I am 21 years old, I am living with my parents in the San Francisco Bay area.

26 March: I haven’t been getting much sleep lately, been sleeping really late. I’ve just been tired but I’m still grateful that I have my health and that you know I have a shelter, food and access to stuff that can distract me while everything is going on, and you know I have stuff I can do, and I’m grateful for that. 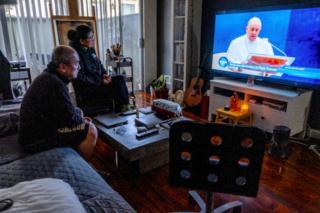 My parents woke me up to watch the Pope deliver his Urbi et Orbi message which is a plenary indulgence for the pandemic, those affected by Covid-19, and everyone else. An event that would normally draw hundreds of people to the Vatican was empty. 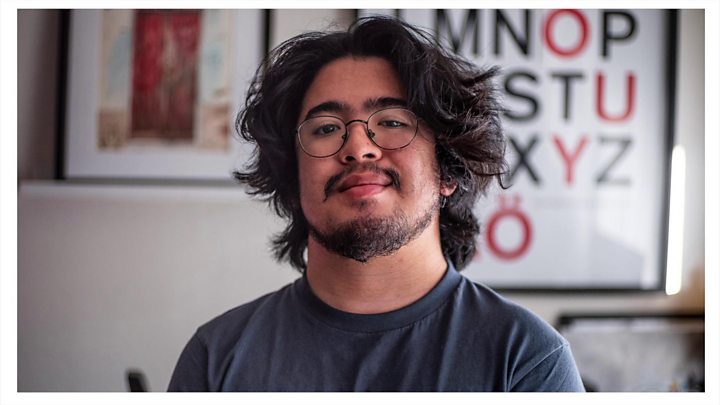 We asked three young Americans to chronicle their very different experiences of the pandemic. Read about Maddie below, a 22-year-old student living in Ohio, and Ana who’s just graduated high school in New York City. 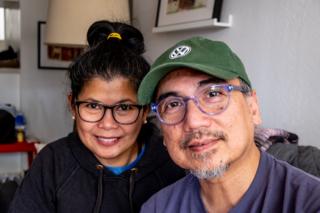 30 March: Not even a 15 hour time difference, shelter-in-place order, and community lockdown can hold back a family function. My relatives in the Philippines usually have regular get-togethers just to update each other and talk about the latest chismis (gossip in Tagalog), but due to the Covid-19 outbreak, we have all resorted to using Zoom in order to communicate with each other. Though it was past midnight for my parents and I, the fun and laughter didn’t stop for hours. 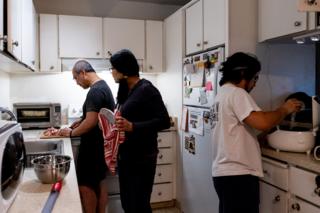 29 March: My family’s lived in this apartment for almost 10 years.

My mom came to America first from the Philippines in 2004, then my dad and I followed her in 2010. Ever since then I’ve been sleeping on the couch – it’s a small, one-bedroom apartment but it’s not too bad. 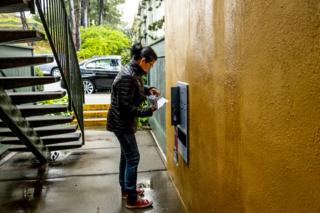 6 April: Here is my mom, retrieving last week’s mail. What was once a daily occurrence has become something only to be done once a week. My parents decided that it was best to only grab the mail once a week to reduce having to touch something that other people may have come into contact with. 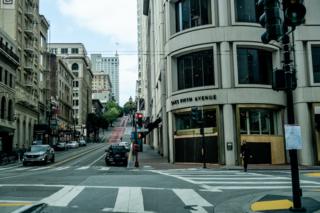 9 April: San Francisco in the time of Covid-19. What was once a bustling city full of tourists and locals is now close to empty. In Union Square, shops of all kinds are boarded up with sheets of plywood, the usual city traffic has halted, and sidewalks are no longer crowded.

Though closed, most of these high-end designer stores will be able to financially recover. But I worry about the fate of hole-in-the wall and mom-and-pop shops. 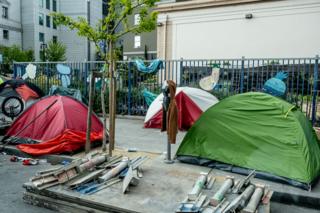 Driving through, I’ve seen a lot of tents lining the sidewalks. Despite the rich residents and lavish tech companies that inhabit the city, it seems that the most vulnerable citizens are left out by the local government.

A lot of people were saying, instead of forcing the people experiencing homelessness to stay in the streets, why doesn’t the city put them up in the hotel rooms since they’re empty anyway? The suggestion went all the way to the mayor. I think it’s a good idea. 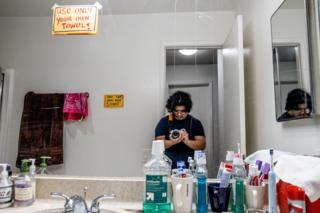 15 April: Self portrait in a newly organised bathroom. Since the beginning of the shelter-in-place order, my mom had put up two signs ordering all of us to only use our own towels when drying our hands and took away the old communal hand towel. My mom also took the liberty of giving each of us our own tubes of toothpaste and bottles of mouthwash while labelling each item.

16 April: It’s been more than a month since this project started, and I wish I could say that things are going back to normal, but obviously that’s not what’s happening. The only thing we can do is do our part and try to flatten the curve.

It’s frustrating that a lot of people don’t feel the same way. And that they’re going out there and protesting in huge groups of people in public and trying to end the quarantine when obviously that’s not going to work. It’s frustrating to see because it will probably just make everything last longer. It’s also incredibly selfish. 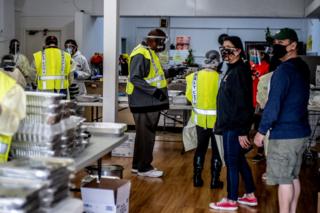 10 May: On Mother’s Day, my parents and I dropped off trays of chicken adobo and rice in Daly City. The donation was for a free community feed hosted and organised by Pilipino Bayanihan Resource Center and the Filipino American Democratic Club of San Mateo County.

Volunteers cooked and dropped off trays upon trays of the adobo and rice. Families and individuals were invited to drive up to the curb and receive pre-packaged plates of the classic Filipino dish to feed themselves and their families. 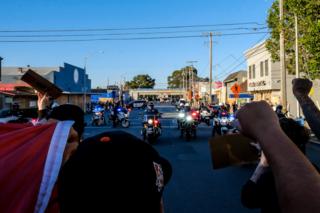 3 June: My family’s been in quarantine for three months now. So I attended a protest in San Mateo county. It was a protest in solidarity with the other Black Lives Matter protests that are going on around the country and around the world. I’ve never been to a protest of that size, and it was just amazing to see all these people coming together for a common cause, fighting for what’s right.

Not everyone can go out all the time and always be out protesting, which is understandable because there’s still coronavirus happening. And there are some people who are older, or some people who are probably immuno-compromised, or maybe it’s just harder for them to self-isolate after going to a protest.

But even now, a lot of people are still showing up and showing out, and it’s incredibly important for us to all keep doing that. 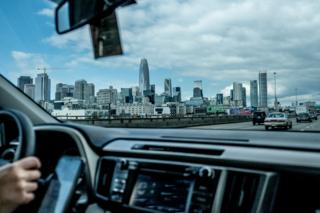 I hope that with everything that comes out of this, other than that people come out healthy and safe and okay, is that we just see that the system we live in doesn’t work. The country we live in is not really as great as some people might think it is, if it was ever great, and that everything needs to change. And we all have to do our part in changing things. Because we all live here, we’re all in it together.