Speaking on Channel 1, Mikhail Delyagin said: “Mr Scholz, the grandson of a Hitlerite war criminal, in his rhetoric and gesticulations, has been imitating Hitler.

“I’ve watched lots of his speeches. He’s a complete copy.

“This man is trying to imitate him.

“He is imitating Hitler, consciously, consistently, and deliberately.” 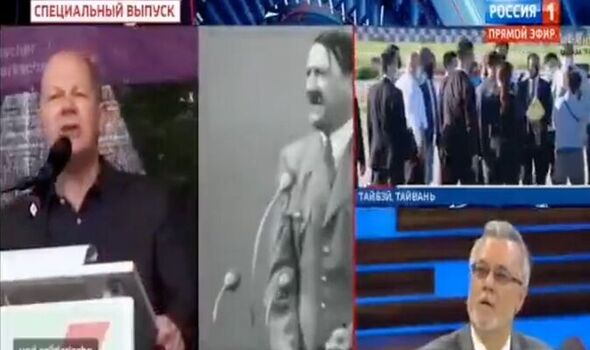 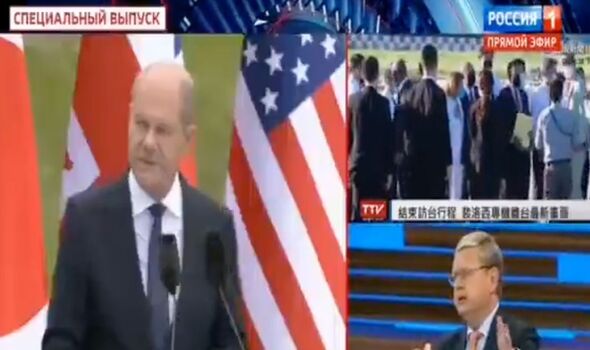 As the Russian minister made the remarks, pictures of Mr Scholtz and Hitler were seen appearing in the background in an attempt to compare the two characters.

The images in the background showed the two characters holding a speech in front of an audience.

Referring to the images shown on TV, a Channel 1 host is heard commenting: “Here, watch this!

“These are images that appeared a while ago for comparison of how they gesticulate with their fists.”

The video was posted on Twitter by BBC correspondent Francis Scarr.

He commented: “On Russian state TV they’re really going in hard with the attacks on Olaf Scholz today.

Mr Scholz has been the subject of an intense misinformation campaign, with Putin-backing Telegram groups alleging a connection between the German Chancellor and high-ranking Waffen SS official.

A spokesman for Mr Scholz dismissed the claim as “utter nonsense.” 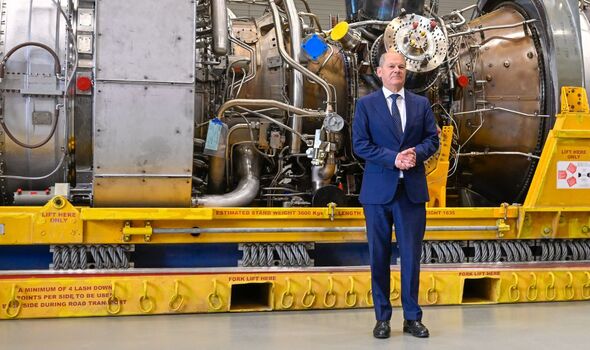 The Chancellor’s grandparents worked on the railways in the port city of Hamburg.

The comments came as Mr Scholtz paid a visit to Nord Stream 1 gas turbine in Germany.

According to Siemens Energy, the visit was held on Wednesday morning in Muelheim an der Ruhr, in northwestern Germany.

The planned visit comes after Russia’s decision to significantly reduce gas flows through the Nord Stream 1 pipeline into the EU to just 20 percent of its capacity.

Before the Ukraine war, Germany imported over half of its gas from Russia through the use of the Nord Stream 1 pipeline.