Tropical Storm Isaias has been downgraded from a Category 1 hurricane to a Tropical Storm, but the system is expected to regain its hurricane strength overnight as it tracks towards Florida. Florida’s Governor Ron DeSantis warned the public “not to be fooled” by the storm’s downgrade to Tropical Storm status. NOAA’s National Hurricane Center (NHC) expect the storm could strengthen as it approaches the state.

Governor DeSantis told reporters at a news conference: “Don’t be fooled by the downgrade.

“We do think it will be upgraded back to a hurricane later on this evening.”

Florida is preparing for Isaias’ arrival, which has prompted a state of emergency to be declared for a dozen counties on the state’s Atlantic coast. 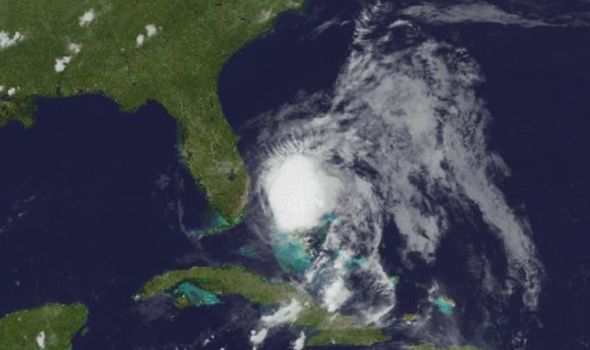 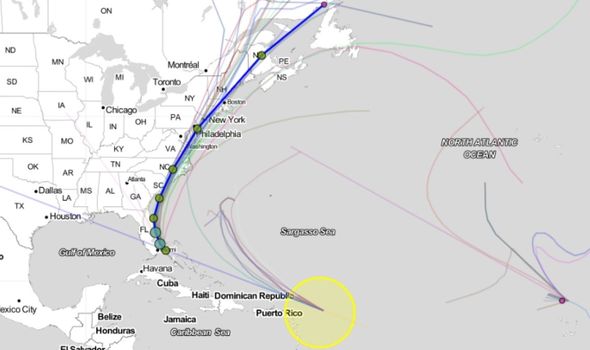 The impending storm also prompted authorities in some parts of Florida to close COVID-19 testing sites.

Hotel rooms along the east coast have been reserved for anyone who has coronavirus and needs to evacuate their homes due to the storm.

The storm has already caused destruction in the Dominican Republic, Puerto Rico and the Bahamas.

At least two people have died in the Dominican Republic, while at least one person has died in Puerto Rico. 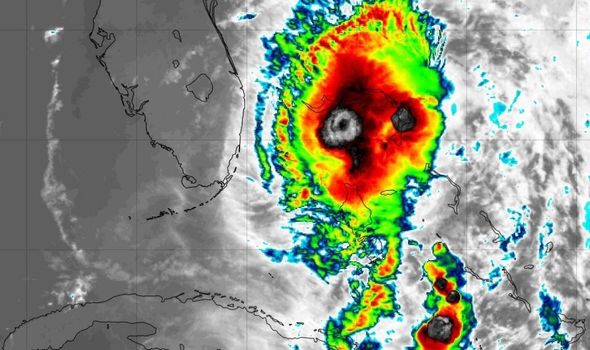 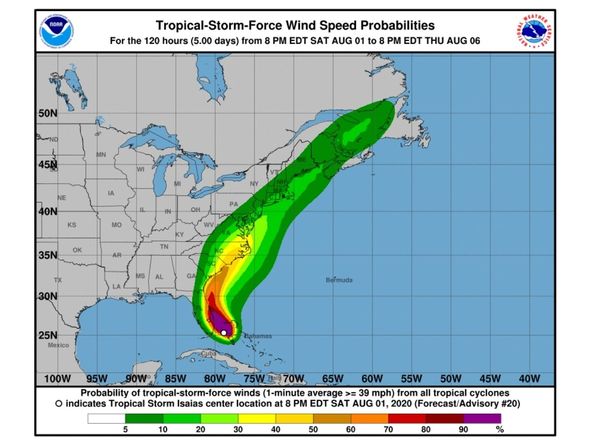 Where is Tropical Storm Isaias?

As of 2am EDT (7am British Standard Time), Tropical Storm Isaias was tracking about 70 miles east-southeast of Fort Lauderdale, Florida, and about 90 miles southeast of West Palm Beach Florida.

The storm is currently moving in a northwestward direction, at speeds of 8mph.

According to the NHC, the tropical-storm-force winds extend outward by up to 115 miles from the centre of the storm.

On its current path, Isaias is expected to move northwestward today, followed by a north-northwestward motion by tonight.

Isaias is expected to approach Florida’s southeast coast on Sunday morning, according to the current path update.

The NHC forecast Isaias will then move on Monday and Tuesday from the coast of Georgia further into the US. 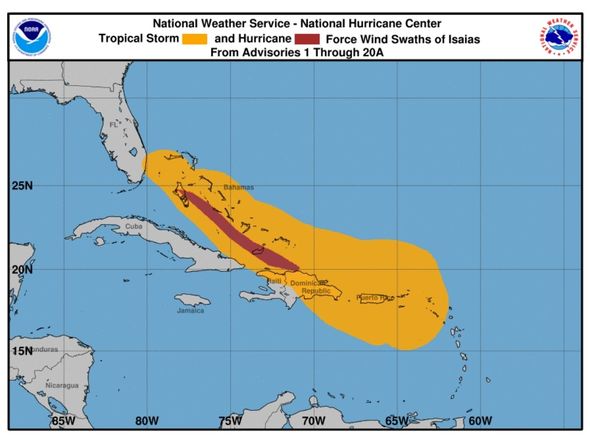 The NHC forecast states: “A turn toward the north and north-northeast is anticipated on Monday and Tuesday with an increase in forward speed.

“On Monday and Tuesday, the center of Isaias will move from offshore of the coast of Georgia into the southern mid-Atlantic states.”

The NHC has warned of a dangerous storm surge of 2-4feet for Jupiter Inlet to Ponte Vedra Beach, and of 1-3feet for North Miami Beach to Jupiter Inlet in Florida.

The NHC also warn of a dangerous storm surge which will raise water levels by as much as 3-5 feet over normal tide levels in areas of onshore winds in the Northwestern Bahamas.

In the Northwestern Bahamas this morning hurricane and tropical storm conditions are expected to continue.

The NHC also warns Isaias will bring heavy rainfall totals, potentially sparking life-threatening flash-flooding in the Bahamas and flash and urban flooding along the US east coast, with some river flooding possible along parts of mid-Atlantic states and the Carolinas.

A Hurricane Warning is in effect for Boca Raton to the Volusia/Flagler County Line Florida, and Bimini, the Berry Islands, and Grand Bahama Island.

A Tropical Storm Warning is in effect for North of Ocean Reef to south of Boca Raton Florida, Lake Okeechobee and Volusia/Flagler County Line to Ponte Vedra Beach Florida.

A Tropical Storm Watch is in effect for North of Ponte Vedra Beach Florida to South Santee River South Carolina.