But as the mercury lifts, battling weather systems threaten bouts of strong wind and heavy rain. 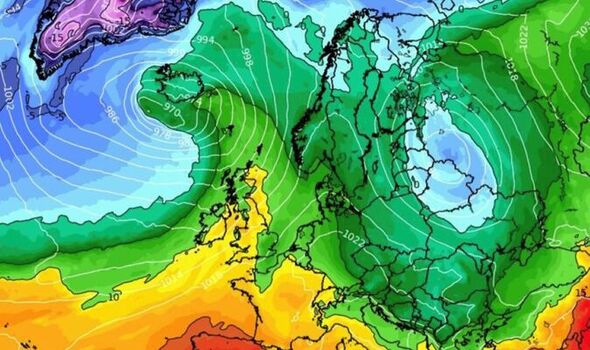 Balmy warmth will waft across southern Britain over the coming days as a plume of warm air sweeps in from the Atlantic.

For much of the country, above-average temperatures could hold out through the rest of the week.

Jim Dale, meteorologist for British Weather Services, said: “On Monday and Tuesday we could see temperatures in southern Britain push past the 20C mark.

“The warm weather will be driven by south-westerly winds driven by a ridge of high pressure to the east.

“This is going to be a spell of very pleasant, Indian-summer weather, and may hold out through the rest of the week.” 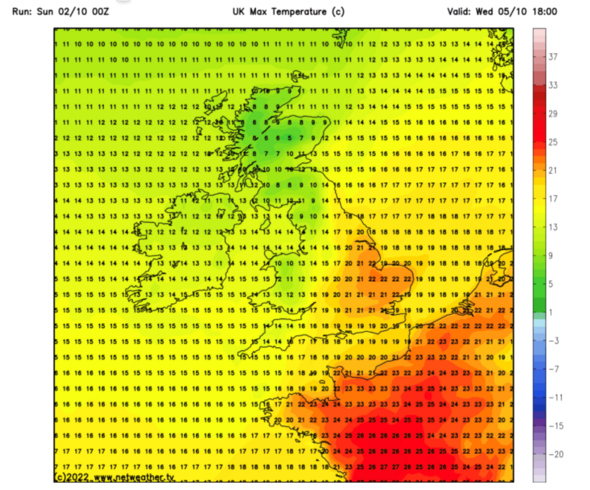 Scotland will be much cooler and more unsettled, with daytime highs of just 10C and overnight lows in single figures.

This will be driven by a low-pressure cyclonic weather system spiralling to the north-west of Britain, according to the Met Office.

A separate anticyclonic region of high-pressure over Europe, however, will join forces to pull mild south-westerly winds across Britain.

Met Office meteorologist Alex Deakin said: “With this pressure set up the winds are always going to be coming in from the southwest bringing milder air. so next week will be a bit warmer. 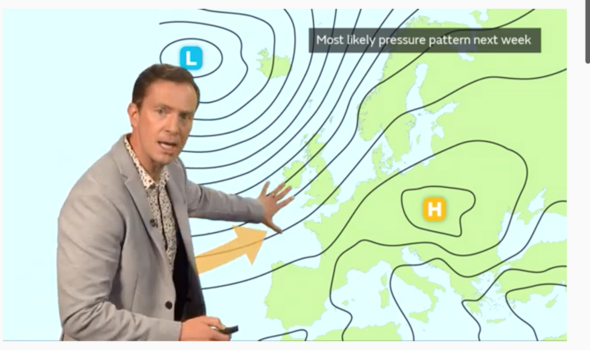 “Overall, next week is largely dry across the south and east, showery and breezy across the northwest but with that wind coming in from the southwest it will be milder.”

High pressure will heavily influence the weather through the start of the month as the nation enjoys temperatures more typical for spring.

But overnight temperatures will plunge under clear skies bringing the risk of frost to parts.

James Madden, forecaster for Exacta Weather, said: “The first half of October, so far looks like bringing settled spells of weather as high pressure retains a strong influence.

“There is the potential for a spell of Indian summer weather at the start of the week with temperatures to lift to 20C or higher in parts of the country. 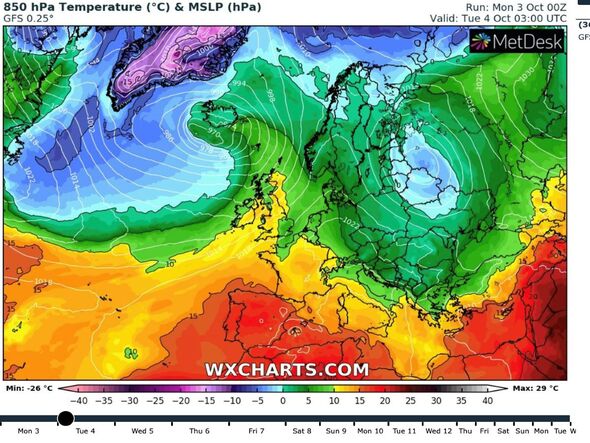 “However, the evenings and mornings will be much cooler and despite the mid-autumn warmth, there will be a risk of frosts under these conditions.”

While temperatures will start heading upwards, gales and torrential downpours will hit parts of northern Britain.

Met Office meteorologist Jonathan Vautrey said: “We will see the winds strengthening [in Northern Ireland and western Scotland] during Monday daytime with gales developing across coasts and hills, and as rain begins to push its way through, some heavier bursts are possible.

“But for much of England and Wales, it will be another fairly fine and dry day.

“The clouds will tend to make the sunshine hazier at times, but temperatures will be up a degree or so.

“Into the week ahead, the rain will move southwards and we will continue to see those strong winds.”