A developing area of low pressure has sparked a drastic shift in the calm and mild weather conditions the UK experienced at the beginning of the week. Throughout Wednesday, thundery showers are expected to sweep across almost the entire country, accompanied by strong winds which will push the temperature down significantly. The fierce conditions have prompted the Met Office to issue a yellow weather warning to areas under particular threat from flooding in addition to damage caused by intense gales.

Speaking on BBC Breakfast, weather presenter Carol Kirkwood said: “We do have a lot of rain – one batch is going north, and another batch is coming south.”

She warned the temperature was expected to gradually decline throughout the course of the day before she added: “Wherever you are today, it’s going to be a windy one.

“We say goodbye to the rain early doors across north-east Scotland, but the rain across southern Scotland, Northern Ireland, England and Wales pushes southwards through the course of the day.

“Behind it, we see a return to some sunny skies but also some heavy, potentially thundery, and blustery showers.” 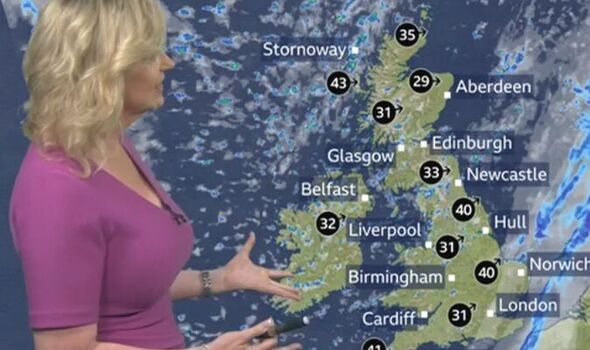 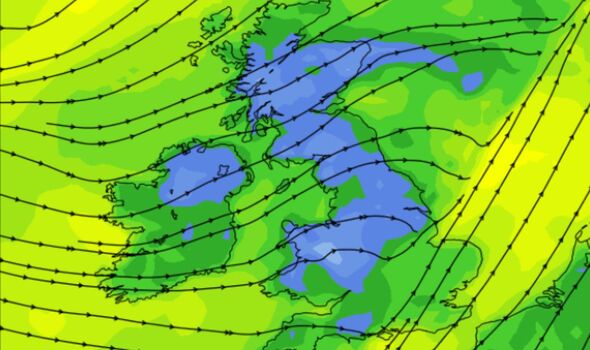 As the miserable weather front works its way across the nation, wind speeds are predicted to rapidly pick up, particularly around coastal regions.

Ms Kirkwood said: “The strongest winds today will be around the coasts, but inland we still are looking at gusty winds.

“If you have anything small and loose in your garden, it might be worth just securing it.”

The temperature across the UK is expected to settle somewhere between 11 and 16 degrees Celsius, although the wind will likely make conditions feel far colder. 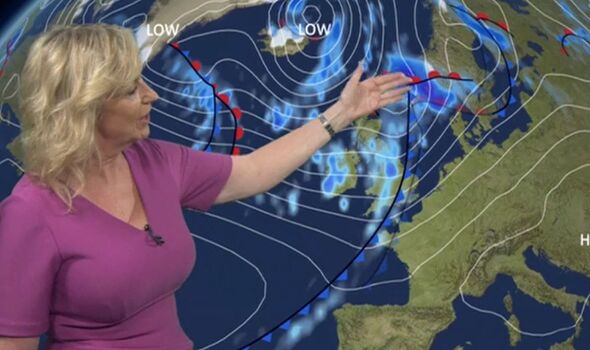 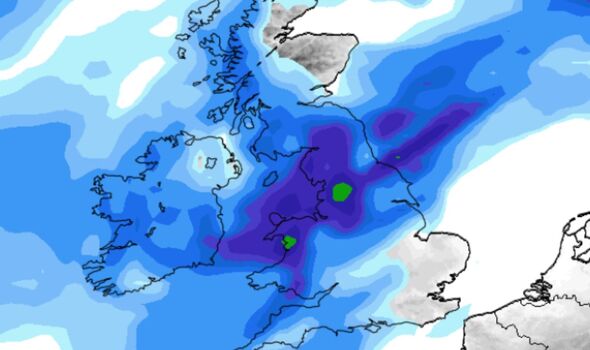 The Met Office has issued a yellow weather warning for wind across northern and western areas of the UK.

The warning has specified that strong gales could cause some damage to buildings, such as tiles being blown from roofs, and the conditions could disrupt transport services, including road, rail and ferry.

There is a particular focus on coastal regions, where the wind is expected to be strongest, due to aggressive sea conditions that could accompany the blustery weather.

A yellow warning for rain, meaning the downpours could cause flooding, has been issued for a smaller area in southern Scotland.

The weather warning issued by the Met Office, so far, does not cover Thursday as conditions are expected to have lightened slightly overnight. 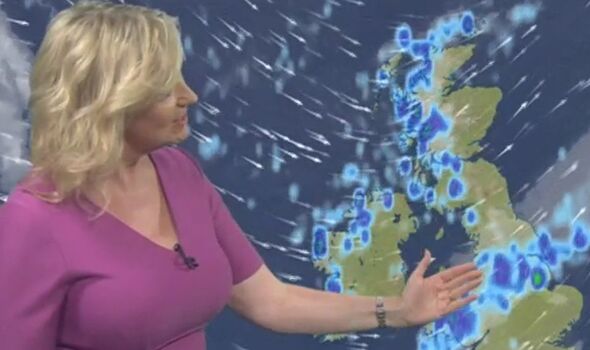 Ms Kirkwood did outline that, due to the strong winds, there would be little chance of frost or fog heading into Thursday morning.

Forecasting the picture for Thursday, the weather presenter said: “It still is going to be windy.”

Showers in the west that will remain strong overnight from Wednesday are set to spread out towards the east, with some rainfall tipped to be particularly heavy.

Throughout the day wind will again pick up the pace, creating blustery conditions as the UK heads towards the weekend.

Read next:
Major road changes come into effect today as temperatures drop
BBC Weather – 60mph winds to batter UK as “gales” to strike mid-week
Lawns should get their ‘last cut’ in October – 9 jobs to do now
Gale force winds to batter Britain as temperatures plummet to freezing
‘Surprisingly tough’ plants to make garden ‘thrive’ during all seasons