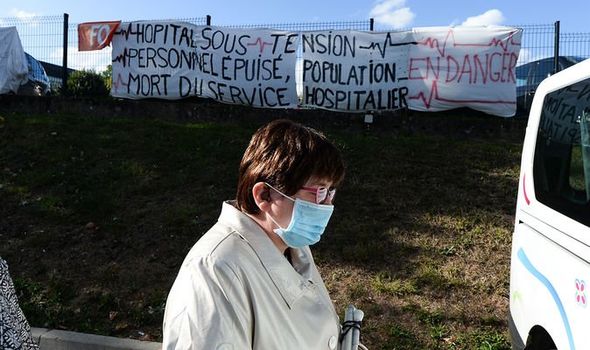 Laval hospital is having to close its emergency department for four nights this week as there are not enough available doctors. Caroline Brémaud, head of the hospital’s emergency service, said: “The situation is catastrophic, dramatic and truly unprecedented.

“When emergency rooms close, there are always lives in danger.”

She added: “we have reached a point of no return.”

The first of these closures took place on Monday – with only people who had life-threatening emergencies being taken in.

The next closures will take place tonight, and on Saturday and Sunday.

Ms Brémaud told franceinfo on Tuesday that in France, “for years the health system has been deteriorating in silence.”

Staff in the emergency room at Laval hospital have been on strike since October 9 – with the hospital calling on the French ministry of health for assistance.

Ms Brémaud described the help they had been given as “a tiny band-aid on an open wound”.

She added: “We can’t just be satisfied with small measures. We have to completely rethink our health system.”

Asked about the mood of hospital staff, she said: “We are worn out”, but added: “we have the strength to fight.

“But we need the whole population behind us. We need all citizens. We need the population to act, to react, to go out into the streets, to join associations, to make ourselves heard loud and clear.”

The emergency room was overwhelmed, she said, due to “medical deserts” within France.

This, they wrote in August: “In turn results in inadequate access to healthcare and the exacerbated health inequalities.

“Certain geographic locations,” such as rural areas, “are particularly affected, not least because health workers are gravitating towards bigger cities – and increasingly to other countries – to access better career opportunities.”

However, the reasons for this localised dearth of healthcare workers can be numerous and diverse.

It could be that medical institutions do not offer enough places on training programmes, or because working conditions are “challenging, especially where supplies, equipment and digital technology are lacking”.

Dr Zerbib and Mr Marschang wrote: “Moreover, many hospitals and healthcare services are closed down or rationalised in areas where it is deemed too costly to operate them.”

They warned: “Unless concerted action is taken now, medical deserts will become a common feature of the European health landscape over the next years.

“For the time being, neither Europe nor the Member States are efficient enough to reverse this deplorable trend.

“What is urgently needed is a thorough dusting of policies and attitudes to ensure Europe’s health workforce doesn’t get stuck with its head in the sand.”

Ms Brémaud commented that the situation could be helped by private doctors being able to practice wherever they wish.

“We also need to reopen beds,” she said. “To do this, we need carers. And how do you attract care providers? We have to give them a good quality of life at work and decent working conditions.

“We love our job, but what makes us leave are the deplorable working conditions.”