SANTIAGO (Reuters) – For many in Santiago’s Plaza Italia, ground zero for mass protests in Chile that have raged for months, the chaos seemed never to end. Bloody clashes with police forces, tear gas, hooded vandals, broken windows and graffiti were a daily event. 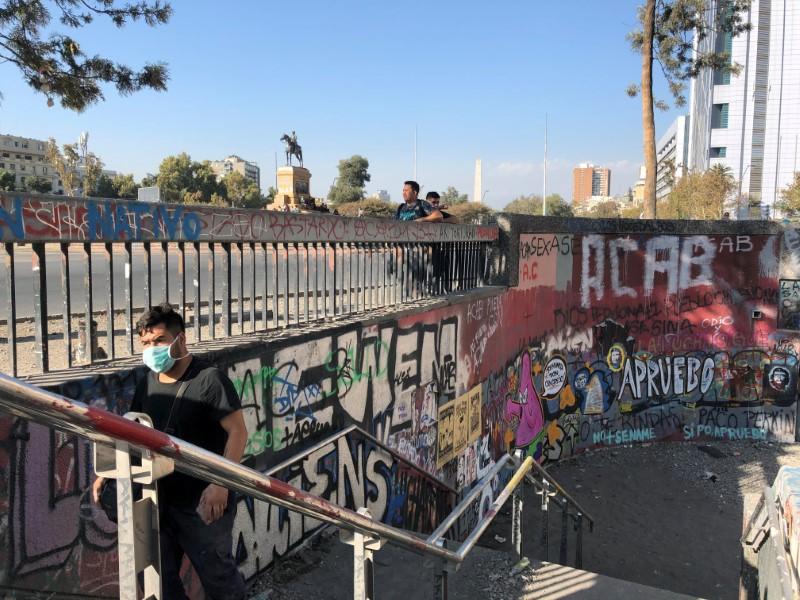 The city of 6 million’s central square, dubbed “Plaza Dignity” by throngs of angry protesters who dutifully gather here most evenings and weekends, has fallen silent. On Friday and Saturday evening, the few remaining demonstrators were repeatedly shouted down by drivers in passing vehicles who yelled at them to go home.

“First we need to stay alive, then we keep trying to change the world,” said Enrique Cruz, a street vendor who said he supported the cause but recognized it was time to put it on hold.

Though Chile has yet to declare a full lockdown, authorities shut bars, discos and restaurants last week. On Sunday, a night-time curfew took effect.

Cases of coronavirus in Chile have surpassed 600 on the 20th day of the outbreak, seemingly overnight trumping talk of ailing pensions, piddling salaries and the high cost of public transport that have recently dominated discourse.

Few police patrolled the plaza last Friday night, the weekday evening that had in the past seen the largest and most violent protests.

A handful of demonstrators huddled around a monument to Chilean war hero Manuel Baquedano, in the center of the plaza. Some wore hoods over their faces, others had swapped to surgical masks.

Chile’s protests began in October over a hike in metro fares. In the months that followed, riots reeked havoc across the country, devastating the economy, sowing billions of dollars in damages and leading to thousands of arrests and injuries.

Protesters won a major concession late in 2019, when lawmakers agreed to hold a referendum on whether to draft a new constitution.

The vote, originally slated for April 26, was rescheduled earlier this week for Oct. 25 as coronavirus fears took hold and upended priorities.