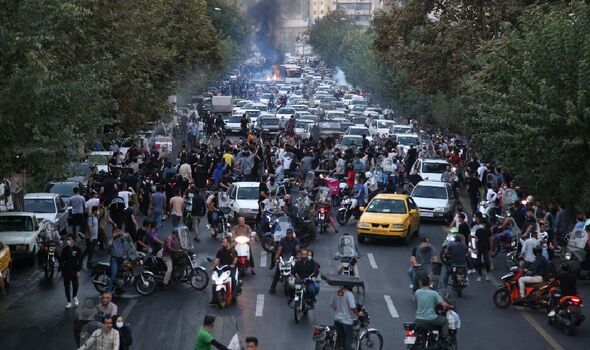 State media said the arrests were made in central Kerman province and claimed the demonstrations had been led “by elements in the UK”. The statement said: “Seven main leaders of the recent protests related to the UK were detained by intelligence services, including dual nationals trying to leave.”

The Foreign and Commonwealth Office said it was investigating the claims and seeking more information.

Tory MP Alicia Kearns, chair of the foreign affairs committee, advised all British nationals to leave Iran immediately because of the “industrialised” level of people being taken state hostage.

She said: “My concern is very grave. The fact is that Iran has shown that it will happily arrest anyone that has dual citizenship.

“If I was a British foreign national in Iran I would absolutely be leaving.”

The seven people were said to be part of a network calling itself Zagros and were accused of “fuelling the flames of the protests”. The group’s social media channels were blocked after the arrests.

Protests calling for the fall of the clerical regime are posing one of the biggest challenges to the Islamic Republic since the 1979 revolution.

At least 66 foreign and dual nationals have been detained since 2010 – with 15 linked to Britain, including Nazanin Zaghari-Ratcliffe and Anoosheh Ashoori, who were released in March.

Charity Human Rights Watch said the practice of politically motivated detention of dual nationals in Iran has grown since 2014.

As many as 506 people have been killed since demonstrations began.

Protests broke out in September after the fatal beating of Mahsa Amini, 22, by morality police for “improperly” wearing a hijab.