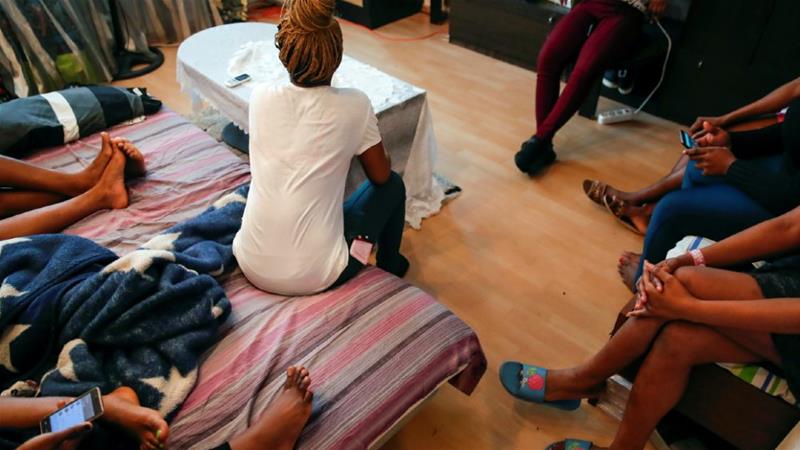 Survivors of Sexual and Gender-Based Violence (SGBV) who have been forced to leave their home countries are now facing greater risks in the United Kingdom due to the spread of coronavirus and the restrictions brought into force to fight it, according to a new study.

These survivors, mostly women, are having to deal with increased vulnerability to further abuse and exploitation, researchers reported on Tuesday. Many are trapped between remaining in abusive situations or becoming homeless, as they do not qualify for public housing.

Isolation, limited social contact and no access to services also reminded some survivors of the restrictions they faced in conflict and under siege before they fled their homes, reported researchers in Forced migration, SGBV and COVID-19 (pdf), published by the University of Birmingham, working with Refugee Woman Connect.

“You know when you already have a problem and another comes on top, it makes the problem bigger – like when it’s just one problem, but if you already have all those underlying things carrying this and that trauma, layers and layers of different things,” a West African woman in her 40s, now living in the UK, told researchers.

Survivors of SGBV often require continued treatment for injuries and conditions, but many of those who are undocumented also reported feeling anxious about seeking medical help, scared of being reported and deported. Others worried they would not be a priority for access to a ventilator if needed.

“As a charity, we are seeing a huge increase in hardship for SGBV survivors in the UK asylum system particularly,” Pip McKnight, head of policy at Refugee Women Connect, told Al Jazeera.

“This is a population already suffering from the structural inequalities of the UK asylum system, which operates a ‘hostile’ policy for those that are destitute and in need of asylum support. This support is set at 50 percent of mainstream benefits – about five pounds ($6.10) per day – which requires those in receipt of asylum support to rely on the charity sector … With access to food banks limited, food prices rising and services closing, we are seeing our clients really struggle.”

The study looked at the experiences of survivors the UK, Turkey, Tunisia, Sweden and Australia, and was based on interviews with 52 survivors and 45 service providers. Researchers estimate hundreds of thousands of people living in these five countries alone face increased risks.

Those risks are likely to be replicated far beyond the countries studied, said lead author Jenny Phillimore, professor of migration and super-diversity at the University of Birmingham.

“Unfortunately, forced migration and Sexual and Gender-Based Violence are closely connected, and where you have refugees, you have reports of such violence – see, for example, the Rohingya,” Phillimore, a world expert in refugee integration, told Al Jazeera.

“SGBV is perpetrated within conflict, flight, in camps and in countries of refuge – and perpetrators are combatants, governments, other refugees, traffickers, immigration officials, aid workers and kin.”

Few survivors of forced migration and SGBV are in an economic position to live off savings and what work was available in the informal economy has largely dried up in the age of lockdown.

Falling outside social protection even as many charity groups have paused operations, increased economic hardship brings with it increased vulnerability to expoitation, while many living in overcrowded shared accommodation are simply unable to self-isolate or maintain social distancing.

Governments have been “oblivious, on the whole” to the issue, said Phillimore.

“There has been some attention paid to forced migrants, but nothing specific for SGBV survivors – which is pretty similar to ‘normal times’,” she told Al Jazeera.

“Some terrible things happen to these women even in countries of refuge in ‘normal times’. They are simply numbers.

“That said, the Tunisian government has been giving irregular migrants a three-month ‘grant to remain’, which has made all forced migrants’ situations less precarious.”

Governments do not have a unified approach to the coronavirus crisis itself, let alone to the emergency effect it is having on the most vulnerable.

“Unfortunately, the rights of forced migrants are often the last to be considered, and in the UK the response is as we would have expected – and in keeping with hostile environment policies,” said McKnight of Refugee Women Connect.

“We have seen examples of good practice in other parts of Europe. Ireland created a temporary firewall between immigration control and health and policing services, so no one would avoid healthcare or reporting crimes to police – for example, in cases of domestic abuse – for fear of exposure to immigration services. [Also,] Spain released all those from immigration detention during the pandemic, recognising they are not criminals.”

Researchers are urging governments around the world to urgently ensure basic safety nets are put in place for all forced migrant populations – regardless of legal status.

They are also calling for access to universal healthcare and the revocation of all financial medical costs, as well as the availability of emergency housing for all survivors of violence. Providing cash to pay for food, the distribution of hygiene products and giving access to digital resources and psycho-social counselling would all help the situation, they add.

“Women need access to shelters regardless of their immigration status,” said Phillimore. “In an ideal world, they would be regularised or receive positive outcomes on their asylum cases, getting special consideration for the multiple traumas experienced – that is really blue-sky thinking.”

But what can people do?

“These women are very isolated, but also they have been so abused that they trust no one,” said Phillimore.

“Everyday acts of care by ordinary people – sharing food, clothes and offers of assistance, by other women – can not only help with material aspects but help rebuild their faith in humanity.”

And people are already helping.

“In fact, we’ve been overwhelmed by the generosity of our communities in helping to ensure survivors have food and cleaning products and volunteering to carry out wellbeing checks,” said McKnight.

“But there’s only so much they can do. Simple systemic changes will alleviate suffering – and potentially save lives.”