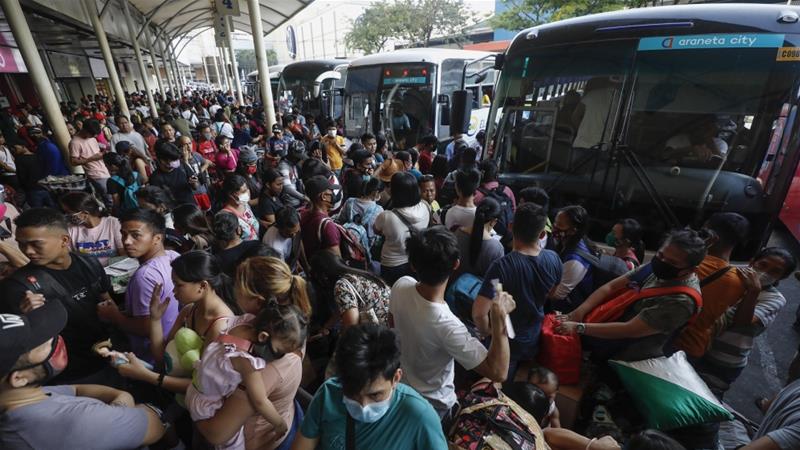 Manila, Philippines – Cecil Carino agonised over her decision. On Thursday evening, the resident of San Roque – a maze of cramped, makeshift dwellings buried within the heart of Quezon City – listened to Philippine President Rodrigo Duterte issue a lockdown order for Metro Manila due to the coronavirus pandemic, which has now spread to more than 114 countries.

The unprecedented lockdown, which takes effect between March 15 and April 14, will bar domestic travel in and out of the capital and confine more than 12 million people to the area.

It gave Carino, 37, less than two days to choose between waiting out the lockdown with her family, or taking her children to a relative’s home outside of Manila and leaving her husband, a construction worker, behind.

“[He] will stay. No work, no pay,” she said. “But it’s possible the company will shut down, maybe tomorrow.”

In his address, Duterte vowed to deploy police and military to instil “peace and order” during the lockdown, which was recommended earlier that day by an interagency committee. He insisted the measure is “not martial law”. 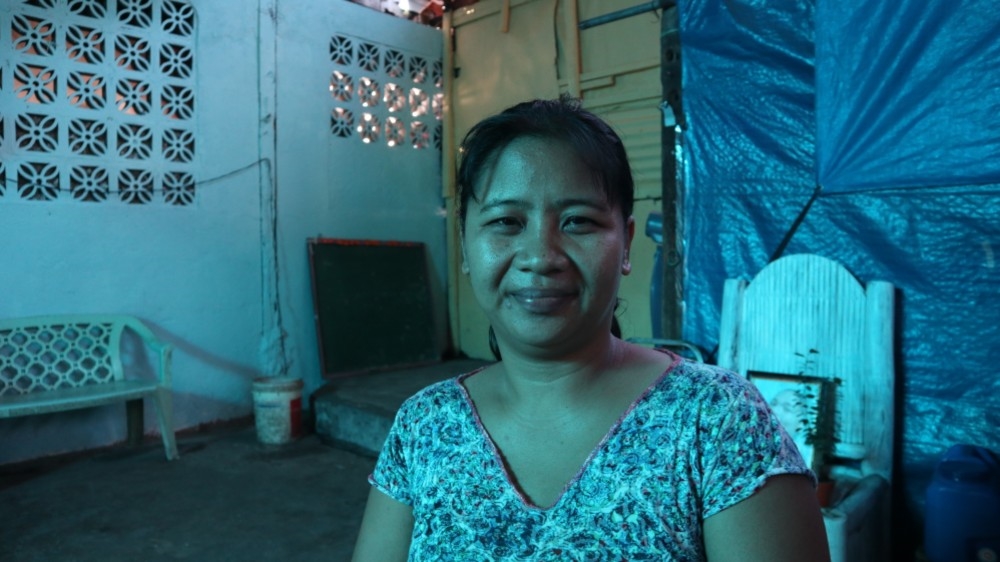 But authorities have not revealed provisions for financial assistance and healthcare subsidies, leaving impoverished neighbourhoods like San Roque, home to around 6,000 families, in a state of “confusion and panic,” said Dr Joshua San Pedro, co-convener of the Coalition for People’s Right to Health.

“It seemed mostly like a military and police solution rather than a health intervention,” he said.

The lockdown order recommends instituting citywide quarantines in any of Metro Manila’s 16 cities and municipalities, should they report more than two positive cases in different communities.

This has already happened in Quezon City, which has so far reported six of the country’s 64 confirmed coronavirus cases. Quezon City alone has a population of more than three million.

It could keep residents of San Roque – many of whom work in construction or security in other cities and make less than the area’s minimum daily wage of 537 Philippine pesos ($10.52) – stranded from their jobs and in economic peril.

“I was hoping the president would address that situation,” Carino said. “That’s why people are getting panicked. We’re not secure.” 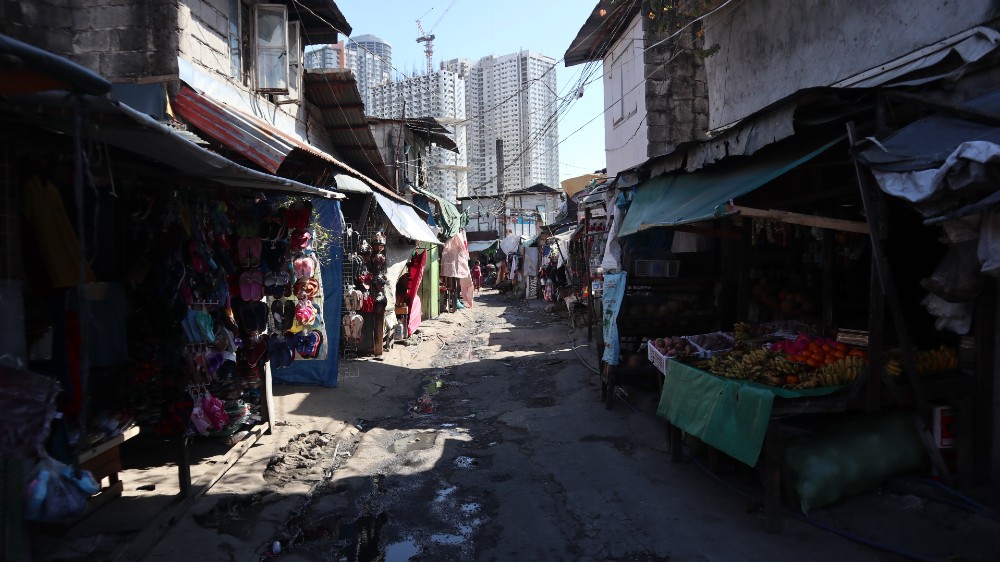 Workers will be stranded in the metropolis

San Roque, an informal settlement, has for more than a decade fought demolition orders designed to clear the land for condominiums and a casino. Its residents have more pressing concerns now.

The Philippines reported 61 of its 64 coronavirus cases in the past week, leading to heavy criticism of the government’s sluggish preparation for the pandemic.

Ely Aboga, a security guard at a mall in Makati, said he is “very scared” of the virus and is worried his neighbours in San Roque are not informed of its severity.

Aboga, 52, said he is planning to bring food and clothes to work in case he gets stranded – but he has not bought supplies for his wife and four children. He knows he could lose his job at any time should his workplace close.

“My payday is not until next week,” he said. “I can’t buy anything now.” 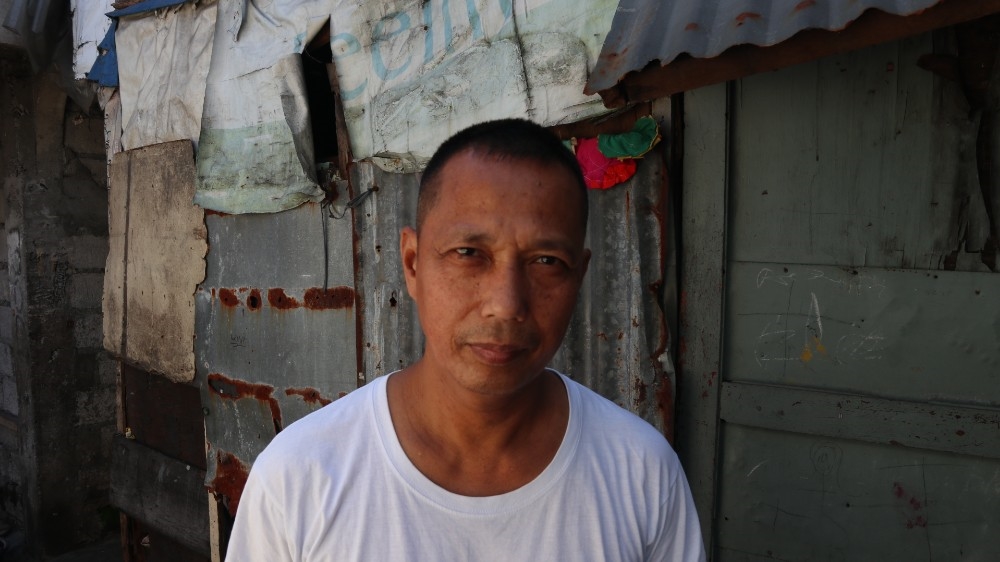 An estimated three million people, who live just outside of Metro Manila, travel every day to the capital to work.

On Thursday, the interior secretary said these workers would be allowed to commute provided that they show evidence of their employment.

This will strand thousands of “informal workers” such as tricycle drivers and street vendors, said Kai Ra Cabaron, public information officer for Kadamay, an advocacy group for urban poor communities.

On Friday, the Philippines’ trade bureau said informal workers should find work outside Metro Manila during the lockdown if they are not registered.

“They wouldn’t have the documentation, the address of their company,” Cabaron said. “They have their pedicabs, their jeepneys or their goods.”

“The government isn’t thinking of these people.”

In his address, Duterte said authorities would enforce social distancing measures in public areas, including mass transportation, which will continue to run.

This may be impossible in densely populated, impoverished communities such as San Roque, where families live in one or two-room dwellings and share bathrooms with neighbours. On Friday afternoon, water had been cut in parts of the community, keeping residents from washing their hands.

“The only thing they can follow with social distancing is minimising the beso-beso – a traditional hug or kiss on the cheek – said Estrelieta Bagasbas, chairperson of Kadamay San Roque.

“But because the homes are small, they cannot afford to do the distancing.”

Bagasbas, 64, is worried residents will not visit the hospital should they get sick.

On Wednesday, Health Secretary Francisco Duque III said coronavirus tests would be free, but residents are used to being charged around 2,000 Philippine pesos ($40) for a doctor’s visit, she said.

Some residents remain unconcerned. Children, sitting next to each other, played in an arcade; next door, young men were cramped into a pool hall. Few residents wore face masks or carried hand sanitiser; some offered the customary handshakes rather than the now-recommended elbow bumps.

But government officials have not visited San Roque to inform residents about the coronavirus pandemic, Bagasbas said. Those who understand the threat of the virus are angry, feeling as they’ve been left to fend for themselves.

“They are struggling. They are crying about the situation,” she said. “Where is our president? Where is our mayor?”

Shortage of tests and hospitals

There is a severe shortage of COVID-19 tests in the Philippines and the country’s health workers are overburdened. Last autumn, it was reported the health department’s budget was cut by 10 billion Philippine pesos ($195.8m).

WHO Philippines told Al Jazeera in an email that “we have supported supplies to the Research Institute of Tropical Medicine,” a hospital in Manila, “sufficient for 3,000 tests and will be delivering a further 1,000 kits scheduled to arrive Friday [March 13].”

Philippine National Police chief Debold Sinas said on Friday that violators of the lockdown would be subject to arrest. The country’s severely overcrowded prisons are not prepared to handle the spread of the coronavirus.

Patients “must be monitored, not by oppressive measures but by encouraging their participation in their right to health,” San Pedro said.

The state of pandemonium has left Carino unsure of what to do. She has just enough money to bring her children to Mindoro, an island south of Manila, for about three weeks, but not if the lockdown lasts longer. (Later on Friday, part of Mindoro said it would go under quarantine starting on Saturday.)

Experts have warned that Filipinos fleeing Metro Manila for the countryside may carry the virus to areas not equipped to test and treat positive patients.

Carino said she was still considering staying in San Roque and using the transportation money on food. More than anything, she wanted guidance and assurance from the government.

“Secure the people for [their] basic needs,” she said, “so the people don’t panic.”