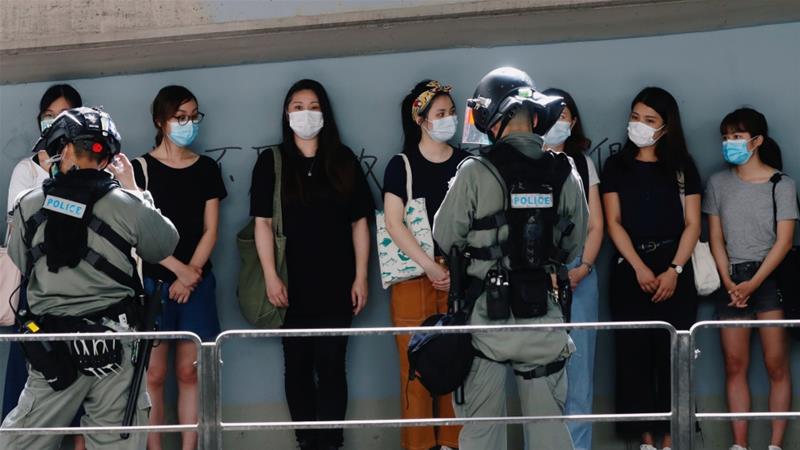 China has slammed the United Kingdom’s decision to offer a path to citizenship for Hong Kong’s residents, threatening potential “corresponding measures” and warning against interference in the semi-autonomous Chinese territory.

In a statement on Thursday, the Chinese embassy in London stressed all “Chinese compatriots residing in Hong Kong are Chinese nationals”, and said the UK’s offer was a violation of past communications between the two sides.

The British move – which could allow up to three million residents of Hong Kong to settle in the UK and ultimately apply for citizenship – came in response to a tough new national security law China enacted in Hong Kong this week.

The city was a British territory until its return to Chinese rule in 1997, and at the time of the handover, China promised to guarantee the city’s legislative and judicial autonomy under a “one country, two systems” policy for 50 years.

But with Beijing seeking to punish what it calls separatism and foreign interference in Hong Kong, critics fear the legislation could put an end to the city’s autonomy and freedoms, including the right to free speech and assembly.

It has triggered widespread criticism, with the United States also ending Hong Kong’s special status under US law, halting defence exports and restricting the territory’s access to high-technology products. The US Department of State meanwhile said it will bar officials responsible for rights abuses in Hong Kong from entering the country while the US House of Representatives on Wednesday unanimously approved a bill imposing sanctions against Chinese officials behind the security law.

Australia has also criticised Beijing’s move, and said it was considering providing “similar opportunities” to Hong Kong people as those offered by the UK.

In its statement, the Chinese embassy in London called on the British government to “view objectively and fairly” the national security law and respect Beijing’s position.

“If the British side makes unilateral changes to the relevant practice, it will breach its own position and pledges as well as international law and basic norms governing international relations,” it said, adding:   “We firmly oppose this and reserve the right to take corresponding measures.”

It did not elaborate further.

A spokesman for the Chinese foreign ministry later slammed the US and Australian moves, saying: “No foreign country has the right to interfere.”

Zhao Lijian said Washington’s move to obstruct the implementation of the new law “are doomed to failure”, saying China will “definitely take strong countermeasures and all consequences will be borne by the US side”.

China has already announced visa restrictions against the US “individuals who have behaved egregiously” on matters concerning Hong Kong.

Separately, Taiwan, a self-ruled island that Beijing claims as its own, warned Taiwanese citizens to avoid unnecessary visits to or transit through Hong Kong, Macau or mainland China, calling the law “the most outrageous in history”.

In Hong Kong, a group of pro-Beijing legislators and about 20 supporters gathered outside the US consulate on Thursday to condemn “American and foreign meddling in China’s internal affairs”.

Elizabeth Quat, a member of Hong Kong’s legislature, said the arrest of some 370 protesters during demonstrations against the law on Wednesday showed the legislation was necessary to “restore” peace to the city.

Hong Kong was plunged into turmoil last year when a bill proposing extradition to mainland China triggered months of mass protests that at times descended into violence. The protests succeeded in getting authorities in Hong Kong to shelve the extradition bill, but prompted the central government in Beijing to bypass the city’s legislature and impose the national security law.

Chinese state media on Thursday said the legislation would bring “prosperity and stability”.

“We must face up to the fact that the existence of legal loopholes in safeguarding national security has already made Hong Kong society pay a heavy price,” a commentary in the People’s Daily, the official newspaper of the Communist Party, read.