The Chang’e 5 launch happened early on Tuesday morning, Beijing time, from a Long March 5 rocket at a site in Wenchang on Hainan Island in the South China Sea. The rocket was transported last week by tractor from its hangar to the launch site in Wenchang.

The unmanned spacecraft will attempt to gather at least 2 kilograms of lunar dust and debris from the northern region of the Oceanus Procellarum.

The mission is being carried out on the near side of the moon, in a region that has not been visited before.

According to China, a lander will be placed on the Moon which will drill two metres beneath the surface.

Thanks to the samples, scientists will be able to analyse lunar soils for the first time since the 1970s, when missions from the US and the then Soviet Union returned samples. 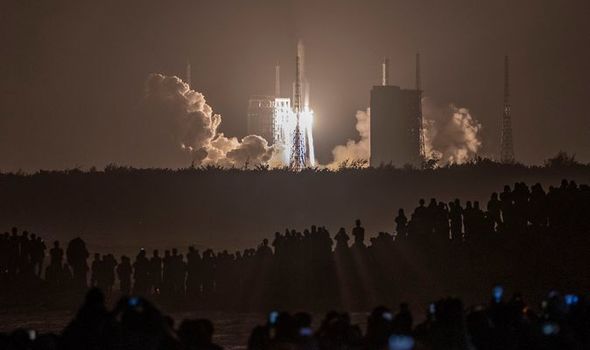 The China Aerospace Science and Technology Corporation (Casc) said: “This is currently one of our country’s most complicated and multifaceted space missions.”

The US’ National Aeronautics and Space Administration (Nasa) addressed Chang’e-5 launch on its official Twitter account, urging China to share its findings with the international community.

It wrote: “With Chang’e 5, China has launched an effort to join the US & the former Soviet Union in obtaining lunar samples. We hope China shares its data with the global scientific community to enhance our understanding of the Moon like our Apollo missions did & the Artemis program will.”

USA Today revealed that US law forbids nearly all space cooperation, outside of the International Space Station, with China. 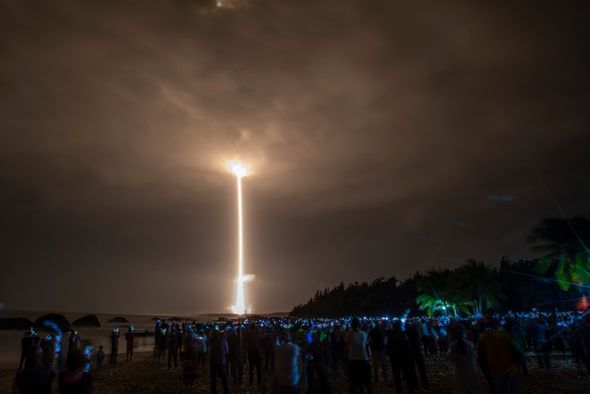 According to the outlet, experts said the prospect of the two countries interacting would be even more unlikely due to current political and military rivalry, as well as allegations of Chinese theft of technology.

Joan Johnson-Freese, a space expert at the US Naval War College, told USA Today: “A change in US policy regarding space cooperation is unlikely to get much government attention in the near future.”

Nasa has been hoping to put humans on the Moon by 2024.

However, a recent report from the agency’s office of inspector general (OIG) found that is “unlikely”.

DON’T MISS
NASA stunned by phenomenon marking X across space [REPORT]
Alien life on Venus could have been transported from Earth [INSIGHT]
Meteor shower this week: How to watch the beautiful Draconids shower [ANALYSIS] 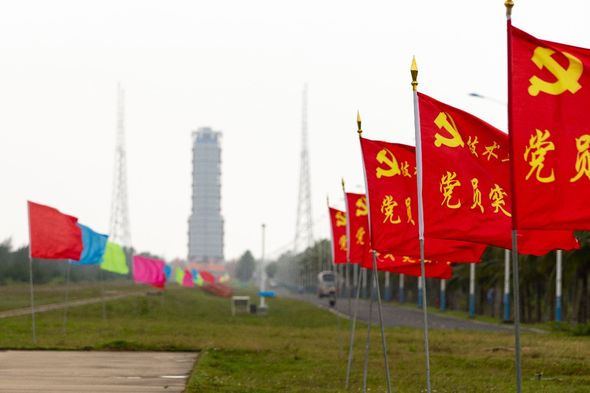 The document said it “will be hard-pressed” in “achieving any date close to this ambitious goal”.

One of Nasa’s targets is to build a ‘Gateway’ – a laboratory which will orbit the Moon.

The site has been compared to the International Space Station (ISS), which orbits Earth.

But the OIG report added the space agency is well behind schedule for this mission.

The report said: “Gateway’s initial elements, scheduled to launch together in early 2024, consist of the Power and Propulsion Element (PPE), which powers and propels the spacecraft in orbit, and the Habitation and Logistics Outpost (HALO), which provides a docking location for the Orion capsule and living and working spaces for crew members. 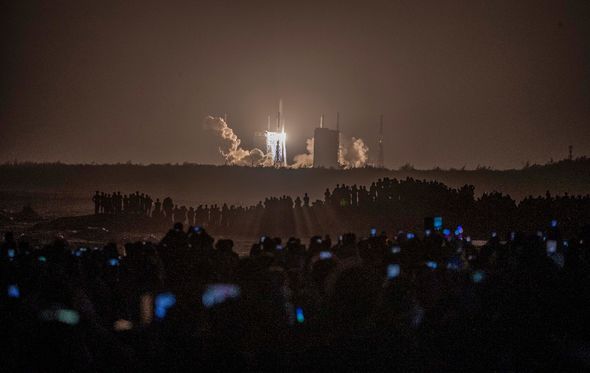 “To date, NASA has spent over half a billion dollars and almost three years of design work on the PPE and HALO.”

It continued: “The development schedules for both the PPE and HALO have been negatively impacted by the Agency’s still-evolving Gateway requirements, including NASA’s decision to co-manifest and launch the two elements on the same commercial rocket rather than separately as initially intended.

“Given this decision, the PPE is likely to launch at least 17 months behind its original date of December 2022 while HALO has two to five months of schedule risk, potentially moving its launch readiness date further into 2024.”

The paper said that the mission could be carried out with “strong, consistent, sustained leadership from the president… as well as stable and timely funding” but it added there are likely to be further unexpected costs.