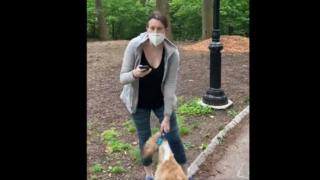 Prosecutors in New York City have filed charges against a white woman who called 911 on a black man who had asked her to leash her dog in Central Park.

Amy Cooper, who was shown calling police in a viral video, will face charges of filing a false report – punishable by up to one year in jail.

Ms Cooper lost her job and dog after the incident, and publicly apologised.

Video of the exchange shows Ms Cooper falsely claiming that the black man, who was bird watching, threatened her.

The incident occurred on 25 May, the same day that unarmed African-American man George Floyd died in police custody, triggering weeks of national and global anti-racism protests.

“Today our office initiated a prosecution of Amy Cooper for falsely reporting an incident in the third degree,” said Manhattan District Attorney Cyrus Vance on Monday.

“We are strongly committed to holding perpetrators of this conduct accountable,” Mr Vance said. He also encouraged “anyone who has been the target of false reporting” to contact the district attorney’s office.

Oh, when Karens take a walk with their dogs off leash in the famous Bramble in NY’s Central Park, where it is clearly posted on signs that dogs MUST be leashed at all times, and someone like my brother (an avid birder) politely asks her to put her dog on the leash. pic.twitter.com/3YnzuATsDm

Christian Cooper, who is prominent in the New York bird watching community, filmed his encounter with Ms Cooper, 41, after he asked her to leash her dog to keep it from scaring away birds. Mr Cooper, 57, said he offered the dog treats, as a way to convince Ms Cooper, who is not related to him, to contain her dog.

In response, Ms Cooper called emergency services. She told them: “I’m in the Ramble,” – a wooded area in Central Park – “there is a man, African American, he has a bicycle helmet and he is recording me and threatening me and my dog,” as her tone rose in apparent distress.

“I am being threatened by a man in the Ramble, please send the cops immediately!” she said.

Ms Cooper’s actions were widely condemned as racist. She was fired by the investment firm where she managed an insurance portfolio. The pet adoption agency that gave her the dog seen in the video took it back after criticism that the way she held it’s collar seemed to strangle it.

She is due to appear before a judge on 14 October.