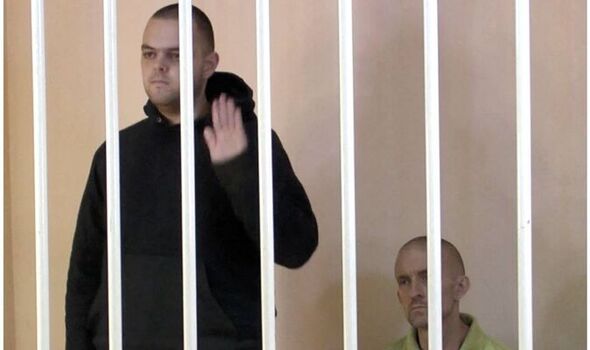 They were accused of being mercenaries – but horrified relatives said they were part of Ukraine’s military, having lived there for several years. The UK Government said it was “deeply concerned.” The pair, plus Moroccan national Saaudun Brahim, were seen in court footage published by Russian news agency Ria Novosti.

All three pleaded guilty and were sentenced to death by the court, which is not recognised by the international community.

The judge first jailed the Britons for 17 and seven years for “war crimes”, then added that the “aggregated penalty” was “an exceptional measure of punishment” – the death penalty.

Another prisoner, Andrew Hill, 35, a father of four from Plymouth, was not mentioned.

Both Britons, who served in Ukraine’s marines, appeared to have lost a lot of weight. Mr Aslin, of Newark, Notts, slurred and seemed to have a bruised forehead. Mr Pinner, from Bedfordshire, was distraught.

Boris Johnson’s spokesman said last night: “Prisoners of war shouldn’t be exploited for political purposes,” adding that under the Geneva Convention, PoWs were entitled to combatant immunity and should not be prosecuted for being involved in fighting.

Foreign Secretary Liz Truss, who sparked controversy weeks ago by saying at first it was acceptable for Britons to go abroad to fight before backtracking, said: “I utterly condemn the sentencing of Aiden Aslin and Shaun Pinner held by Russian proxies.

“This is a sham judgement with absolutely no legitimacy. My thoughts are with the families. We continue to do everything we can to support them.”

Mr Aslin’s family said: “We love Aiden with all our hearts. He and Shaun, as members of Ukrainian armed forces, should be treated with respect just like any other prisoners of war.

“They are not, and never were, mercenaries. We hope that this sentence will be overturned and beseech the governments of the UK and Ukraine to do everything in their power to have them returned to us safely.”

In the video of yesterday’s proceedings, Mr Aslin pleaded guilty to a lesser offence involving weapons and explosives. He was pictured in a cage, leafing through pages of legal documents as the charge was read out.

It had long been feared the court could hand down the death penalty if the two men were convicted of being hired fighters.

Asked about the case earlier, Justice Secretary Dominic Raab said: “We would expect the laws of armed conflict to be respected and we will make sure that we will make all the representations.”

The two British men were also accused of violent seizure of power and undergoing training to carry out terrorist activities.

Donetsk authorities. Mr Aslin and Mr Pinner have said they are long-serving members of Ukraine’s forces and are not volunteers or mercenaries.

Former care worker Mr Aslin moved to Ukraine in 2018, meeting his fiancée there and settling in Mykolaiv. His family say he has been in the country’s marines for four years but had been planning to leave.

A spokesman added: “Aiden was making plans for his future outside the military but, like all Ukrainians, his life was turned upside down by Putin’s barbarous invasion. He has played his part in defending Ukraine’s right to self-determination.”

Mr Pinner is an ex-infantryman who had served in the Royal Anglian Regiment. After moving to Ukraine several years ago, he met his now-wife Larysa.

The UK government had warned people not to travel to Ukraine to fight after Russian tyrant Vladimir Putin invaded in February, but an unknown number did. Ex-soldier Scott Sibley, 36, was killed in combat, the Foreign Office confirmed.

The Lincolnshire father and Royal Logistics Corps veteran had served in the Commando Logistic Support Squadron in Afghanistan. His former unit paid tribute on its Facebook page, saying he “showed Commando spirit until the end.”

The whereabouts of a second Briton is still unknown. It is thought the two men may have been fighting against Russian troops as volunteer defenders.