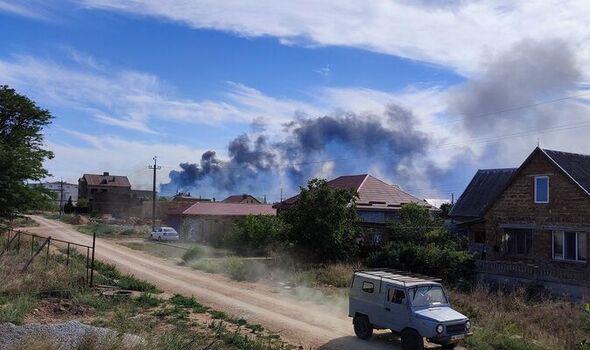 One person was killed and five others injured during a series of blasts on the Saky air base near Novofedorivka on the peninsula’s west coast. Witnesses said they heard at least 12 explosions – prompting speculation Ukraine had carried out its most daring counter-attack yet.

It would be the first known major attack on a Russian military base in Crimea since Moscow annexed the peninsula in 2014.

Vladimir Putin would consider this an escalation in the conflict.

However, Russian state media claimed the simultaneous explosions were caused by a “violation of fire safety requirements”.

The Ukrainian peninsula that Moscow annexed in 2014 is a popular destination with Russian tourists. One video appeared to show visitors fleeing from a beach as smoke rose in the background.

The exact cause is unknown but Ukraine is not believed to possess a ground weapon capable of striking that deep into Crimea, around 124 miles from Ukrainian territory.

Kyiv’s deputy prime minister Iryna Vereshchuk said: “Today’s explosions in Novofedorivka are yet another reminder of whom Crimea belongs to. It is Ukraine.”

Crimea Today News said witnesses had reported fire on a runway and damage to nearby homes as a result of what it said were dozens of explosions.

Ukraine’s Defence Ministry said on Facebook: “The Ministry of Defence of Ukraine cannot establish the cause of the fire.” Officials in Moscow have warned Ukraine that any attack on Crimea would trigger massive retaliation, including strikes on the centre of Kyiv.

Russia said the “detonation of several aviation ammunition stores” had caused an explosion.